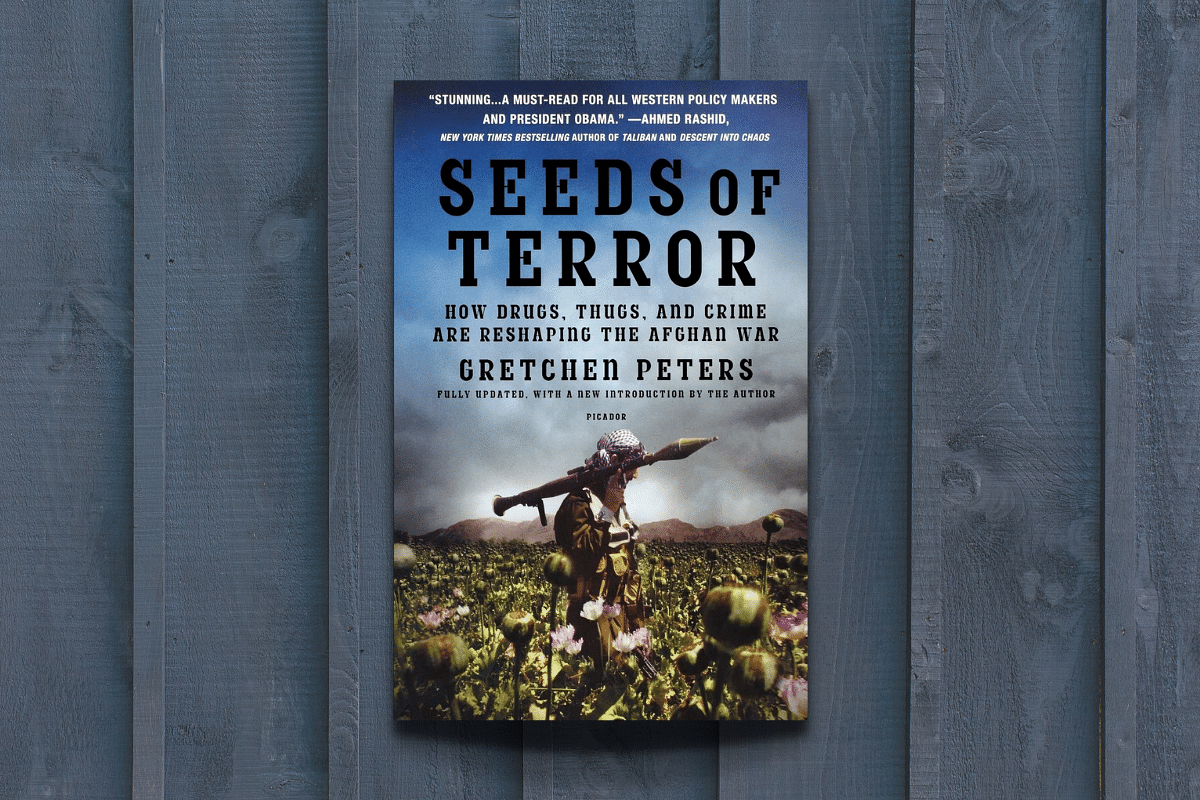 The book cover for 'Seeds of Terror' by Gretchen Peters

The founding myth of the Taliban says that the movement, largely comprising austere 'students' who had grown tired of the violence inflicted on Afghan society by warlords, emerged from Kandahar in September 1994 as a prominent player in the Afghan Civil War.

Their rapid success in spreading to other parts of Afghanistan, overcoming tribal factions and warlords alike with lightning speed, is attributed to the Afghan people welcoming them as upright saviours.

The mythology — which has taken hold in popular consciousness — doesn't end there.

The Taliban's ban against poppy cultivation is often projected to buttress the contrast between the austere Taliban and the rapacious warlords they displaced.

In some circles, they are presented as modern-day Robin Hoods of sorts, led into the fray by a taciturn religious scholar whose reluctance was overcome by the suffering of his countrymen.

Like all myths, these are also based on a kernel of truth. But they strip the founding of the Taliban of important context.

And in doing so, they help mask the financial operation that has been critical to the Taliban's growth in the initial years, its survival between 2001 and 2020, and resurrection in 2021.

Gretchen Peters' book begins with a predawn paramilitary raid on a drug refinery in Baramcha. Located in Helmand province bordering Pakistan, Baramcha is a drug-smuggling hub.

Task Force 333, a joint Afghan and British unit, has been inserted by helicopter and is now making its way on foot to a three-storey drug refinery processing opium, which grows abundantly in Helmand, into Morphine Base, an intermediate drug that is consumed directly or refined further into heroin.

But as the unit approaches the refinery, they are attacked. Soon, Taliban fighters from nearby areas swarm the refinery, fiercely defending it.

Task Force 333 radios the local police for help, but the police will not come to their aid. Which isn't surprising, considering the under-manned, under-funded, and under-equipped nature of the police force in Helmand. And much of Afghanistan. Besides, as Peters later highlights, most police officers are on the take.

The raid sets the tone for the book, allowing Peters to paint us a picture of a nation that has smoothly transitioned during civil war into a narco-terror state. And the Taliban have evolved, despite protestations to the contrary, into a narco-terrorist organisation much like Fuerzas Armadas Revolucionarias de Colombia (FARC).

While some might be tempted to bring up Mullah Omar's decree in 2001 banning the cultivation of poppy as an example of the Taliban's antipathy to the narcotics trade, Peters stitches together evidence from a multitude of sources to show that the Taliban leadership — including Omar himself — purchased an obscenely large quantity of opium from the market at low prices just before.

And when the decree was issued, prices went through the roof and the Taliban leadership made a handsome sum of money.

But the relationship goes back further than that, to the end of 1994, when Mullah Omar and 50 of his students — many of them veterans of the war against the Soviets — pledged to rid Afghanistan of warlords and criminals.

This founding myth glosses over $250,000 raised for this group by a man named Haji Bashir Noorzai, himself a former Mujahideen who fought under Yunis Khalis.

As Peters narrates from an interview with people who knew Bashir back then, Bashir did not have that sort of money. It came from his father, a notorious drug smuggler named Haji Mohammed Issa Noorzai.

And when they capture Kandahar province, the Noorzais convince other members of the Quetta Alliance — a syndicate of smugglers based in the provinces of Afghanistan bordering Balochistan — to cough up money to support the band of fighters ridding them of extortionist warlords and criminals.

The Taliban are fair; they only levy a tithe of 10 per cent on farmers producing opium, and charge smugglers around 20 per cent. And they allow landowners like the Noorzais to boost poppy cultivation.

Production explodes. A delighted Quetta Alliance — used to rival warlords extorting a cut every few hundred metres — funds them further, enabling their takeover of much of the country through combat and bribery.

Peters reserves scathing criticism for the Bush administration, and specifically the Pentagon under Donald Rumsfeld, with a significant part of the book reading like a bureaucratic struggle between the all-powerful Pentagon and a powerless Drug Enforcement Agency (DEA) that appears cursed to be a modern-day Cassandra.

So, when the DEA and a half-dozen other agencies and experts point out as early as 2003 that the Taliban has tapped the narcotics trade to gather the funds needed to regroup, they are ignored. The administration is hyper-focused on Iraq, and will hear nothing that suggests Afghanistan isn't already a solved problem.

A few years later, Taliban commanders have moved up the value chain, running heroin refineries of their own and boosting earnings by an order of magnitude. And they have developed smuggling routes from Afghanistan that pass through Iran or the Central Asian Republics on the way to their primary market in Western Europe. This, incidentally, can explain the Taliban’s belligerence against Pakistan in recent times.

But, throughout this all, Peters maintains that while most of the operation is executed west of the Durand Line, the brains of the narcotics business in the Golden Crescent are in Pakistan.

While readers may expect references to D-Company to be dominant here — and they are discussed, although not in as great detail as one would like — Peters shines a spotlight on the Quetta Alliance's capture of the Pakistani security state.

Not only do they bribe the counter-narcotics forces operating in Pakistan's border areas, they have showed enough political clout in Pakistan to get any of their men released within hours of arrest.

And then, there's the Inter-services Intelligence (ISI) and Pakistan military. Peters mentions an incident where the ISI unit in Quetta had to be disbanded because of how thoroughly compromised they were by the narcotics syndicates.

And multiple incidents where serving officers of the Pakistan Army and Air Force were apprehended while driving from Peshawar to Karachi with 220 kilograms of heroin each, leading her to conclude that there is a drug-smuggling syndicate within the Pakistan military.

Incidentally, the officers were soon removed from police custody and, within days, disappeared.

The details revealed by Peters are remarkable, and even for readers fairly conversant with this topic, nuggets like the National Logistics Cell (NLC) — a front company of the ISI and Pakistan Army that trucked weapons and supplies from Karachi to the Mujahideen beyond Peshawar — help make the book an enriching read.

As a police officer recounts, NLC trucks that had emptied their contents near the Durand Line returned to Karachi sealed and carrying heroin, and the police could never search them.

She highlights Dawood Ibrahim's alleged meeting with Osama Bin Laden, pointing to their agreement to share smuggling routes to buttress her claims that Al Qaeda has also morphed into a narco-terror enterprise, and focuses on D-Company's money-laundering abilities, she fails to do justice to her own assertion that D-Company is now one of the foremost criminal organisations involved in narcotics and money laundering in the entire world.

A deeper dive into its history and operations might have been the icing on top of what is, frankly, a richly layered and delicious cake.

Her treatment of drug money touches upon the role of hawala, real estate, trade-based money laundering, and the Karachi Stock Exchange. The explanations of each of these mechanisms are lucid, and enhance the value casual and serious readers will derive from the book.

Though dated because events in Afghanistan overtook some prognoses made by experts interviewed by her in the book, Seeds of Terror is a very readable and in-depth introduction to the conjoined problems of drug smuggling and terrorism radiating out of Afghanistan and Pakistan to this day, and that makes it a must-read for anyone remotely interested in learning how Pakistan's ISI finances its operations against India and other countries.

Shaunak Agarkhedkar is the author of ‘Let Bhutto Eat Grass’, a series of 4 spy novels that narrate the story of Indian intelligence's operations to target Pakistan's nuclear weapons program during the Cold War. He also writes stories of real-life spies at espionage.substack.com
Get Swarajya in your inbox everyday. Subscribe here.
Tags: