The Nuanced Shift In Gandhi’s Views About Israel 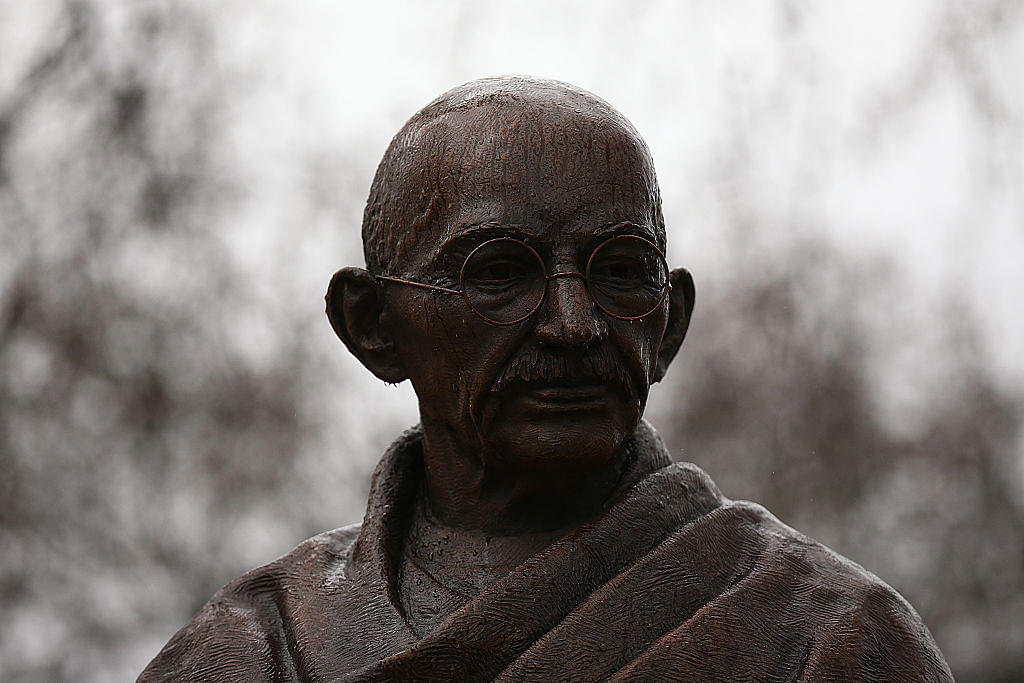 Mohandas Gandhi was a controversial figure. Admired by hundreds of millions, he is best known for his non-violent resistance against the British rule in India. In the aftermath of the British retreat from the subcontinent in August 1947 and his assassination five months later, Gandhi has become the subject of hagiographies and most of his other political beliefs have been obscured from public memory. One such issue is his position on the question of the creation of an independent Jewish state in the British mandate of Palestine. P R Kumaraswamy's latest book, Squaring the Circle: Mahatma Gandhi and the Jewish National Home brings this question to the fore at a most opportune time when India is reconsidering its relations with the Jewish state.

Those even vaguely familiar with Indo-Israeli relations are aware that Gandhi opposed the partition of Palestine in 1947. It has been widely assumed that this was because the Indian leader could not support the creation of a state along religious lines in Palestine while condemning the same in northwestern and eastern India. However, Gandhi's view on the Jewish question was formed much before the demands for Pakistan became loud and later solidified out of ignorance, political expedience, and an ideological obduracy that emolliated only in his final years in the face of the horrors of the Second World War. Squaring the Circle is a most helpful effort that methodically compiles Gandhi's exposure to Jews, Judaism and Zionism from his South Africa days until the end of the Second World War. Kumaraswamy also makes the important distinction between Jews and Zionists – not all Jews were or are Zionists and the two spring from entirely different, some may say opposing, ideologies.

Zionism was a relatively new movement when Gandhi was in South Africa. Of course, the Jews had been praying 'L'shana haba'ah b'Yerushalayim' at Passover and Yom Kippur for over a millennium but the first aliyah in 1882 was almost a disaster; Jewish immigration to Israel was a trickle until the Balfour Declaration in November 1917. Gandhi had left South Africa for India in 1915. His Jewish friends – primarily the Lithuanian-born German Hermann Kallenbach and the English Henry Polak – were, unsurprisingly, not Zionists, at least at the time, and the Holy Land rarely cropped up in their conversations.

In fact, Gandhi's entire understanding of Judaism came from Christianity and after he returned to India, Islam. While the Indian leader would eventually sympathise with the plight of the Jews throughout history, it was not without repeating sectarian calumnies against them. For example, in his infamous article titled The Jews in Harijan in 1938, Gandhi wrote, "indeed, it is a stigma against them (that is, the Jews) that their ancestors crucified Christ." In response to sharp criticism over the article, Gandhi asked, "are they (the Jews) not supposed to believe in eye for an eye and tooth for a tooth?" confusing the Babylonian king Hammurabi, who lived some eight centuries before the first kingdom of the Israelites was founded for the Jews.

Similarly, Gandhi was also influenced by Islamic portrayals of history and conceded that Palestine was Jazirat ul-Arab. Though the term technically refers to only the Arabian peninsula, Indians at the turn of the 20th century understood it to encompass Constantinople, Jerusalem, Mecca and Medina – in essence, the complete domains of Islam in the Middle East. Kumaraswamy notes that several Indian leaders frequently used the term as synonymous with Dar ul-Islam. To see Palestine in this manner was to accept the classical Islamic claim that once a land is held by a Muslim force, it must forever be considered Islamic; the ancient Jewish – and pagan – presence in the land seems to hold no value for Gandhi. He had accepted and internalised the radical interpretations of Muslims figures like Maulana Abdul Bari and Mukhtar Ahmed Ansari who quoted hadith demanding that "Christians, Jews and idolaters be removed from Jazirat ul-Arab at all costs".

Additionally, Gandhi's rejection of Jewish claims on the Holy Land came while privileging Islamic claims – in all fairness, all three Abrahamic religions have some sort of claim on the region. This point was lost on the Indian leader altogether.

The Zionists made several overtures to India's apostle of peace from September 1931 when Gandhi was in London for the Round Table Conference. The Zionists had noticed Gandhi's stature among several notables in Europe and the United States and his support could prove influential in their own dealings with the Western powers. The results of the overtures are well known but Squaring the Circle contains a shocking revelation: several of the letters that were sent to Gandhi by the Zionists were intercepted by his personal secretary, Pyarelal Nayyar, and destroyed. The secretary admitted to as much in an interview in the early 1970s, defending his deeds by arguing that the correspondence would have tarnished his master's historical memory – a sad commentary on how Indians approach history to this day.

India's Hindu-Muslim politics made it difficult for Gandhi to develop a soft spot for Zionism if he did not have one already by the time he left South Africa, argues Kumaraswamy. However, if Venkat Dhulipala's thesis in Creating a New Medina is to be believed, Gandhi either woefully misread the communal equations or stubbornly persisted with his own ideology. Gandhi's absolute commitment to the Khilafat Movement, something even Mohammad Ali Jinnah was not keen on, bewildered even Arabs and Ottomans. For an anti-imperialist, Gandhi was remarkably considerate of the Ottoman Empire!

Gandhi's reckless pursuit of an irrelevant (to India) Khilafat agenda constrained his options as competition between the Indian National Congress and the Muslim League for the support of Indian Muslims spilled out into the open. The league was able to dictate the terms of the Palestine question and push Congress into positions it might not have taken otherwise. Squaring the Circle makes the fair observation that Gandhi might not have said more on Palestine had it not been repeatedly brought into Indian political discourse by relation to (British) imperialism, or the Congress' tussle with the Muslim League. First manipulated by the (Shaukat and Mohammad) Ali brothers and later by Jinnah, it became politically difficult for Gandhi to take a softer stance on Zionism even if he had been so inclined.

Gandhi objected to Zionism for its violence against Arabs as well. Yet his views on ahimsa are not only a radical departure from Hindu scriptures but they have also never been practical. His suggestion to the Jews, for example, that they offer non-violent struggle against Adolf Hitler is not even worth a derisive laugh. Similarly, Gandhi condemned Jewish violence but remained silent on the several Arab riots that marred 1920s and 1930s mandatory Palestine even after the meetings between the Grand Mufti of Jerusalem, Amin Al Husseni, and the Nazi leadership had made Arab intentions ominously clear. While Gandhi stated that he did not support the creation of a Jewish homeland in Palestine by force, he conveniently ignored the bloody history of Islamic conquests that left them in possession of that land.

Interestingly, Gandhi's views on Zionism did change. Kumaraswamy draws attention to a nuanced shift in Gandhi's views in the last few years of his life when Gandhi admitted to American journalist Louis Fischer from jail in 1942 that "the Jews have a good case... If the Arabs have a claim to Palestine, the Jews have a prior claim." This is a profound change from his views barely four years earlier. After the Second World War, Gandhi stopped objecting to a national Jewish home in Palestine but maintained his criticism of the violence perpetrated by the Irgun and Etzel. Kumaraswamy also brings to the fore Gandhi's remark in the same infamous 1938 Harijan article that "if there ever could be a justifiable war in the name of, and for, humanity, a war against Germany, to prevent the wanton persecution of a race, would be completely justified." It is this commitment to the scholarly enterprise that makes Squaring the Circle a truly recommendable book.

Even in his realisation of the Jewish case, Gandhi ultimately falls short though less due to his failures this time. His suggestion of non-violence is obvious but even his comparison of Jewish ghettos in Nazi Europe to Indian ghettos in Transavaal indicates that he did not fully comprehend the atrocities the Jews had just been subjected to; however, it was not until late 1945 that news of the Endlosung would spread outside Europe. Kumaraswamy objects to Gandhi's equating Nazi Germany with imperial Britain but Mike Davis' Late Victorian Holocausts makes a compelling case to the contrary, not to mention Madhusree Mukerjee's Churchill's Secret War.

It is a pleasure to read how Kumaraswamy has dealt with a complex issue with several variables and shades of meaning with nuance and confidence in Squaring the Circle. The book is especially relevant now when India has moved from a passive recognition of Israel in 1950 to the establishment of diplomatic relations in 1992 and is now considering a firmer embrace under the Narendra Modi government. For too long has Gandhi been the foil of those who wished to see a moral case in India's support of Palestine; Kumaraswamy's research makes that position no longer tenable.

The exemplary use of primary and secondary sources has resulted in a rare occurrence in the historical craft where a book might be said to be truly definitive on a subject. Though there are always a few tantalising strands that could be further explored – why the Zionists cared so much about winning Gandhi to their cause, for example – Kumaraswamy has stayed true to his topic of Gandhi's thoughts on the Palestinian question.

Squaring the Circle forces us to step away from the simplistic binaries of pro- and anti-Zionism/Arabs to consider the historical circumstances that shaped Gandhi's views. They were largely formed from incomplete or erroneous information and shaped by political exigencies of Indian politics. Yet Gandhi was honest and bold enough to make small yet significant concessions in his position on Zionism and Palestine in the last five years of his life. The real question is if Indians, who are so used to interpreting their historical figures in absolute binaries, can accommodate Gandhi's complete thoughts on Israel into their historical narrative. Perhaps some might even be bold enough to wonder why Gandhi's views from 70 years ago and cult of Congress and no opposition party, despite the political cacophony, has come remotely close to offering a complete and alternate weltanshauung comprising must still shape India's destiny. Regardless, for those interested in India's relations with Israel and Palestine, Kumaraswamy's Squaring the Circle is an indispensable read.