Science In India - What Does The Prime Minister Think Of It? 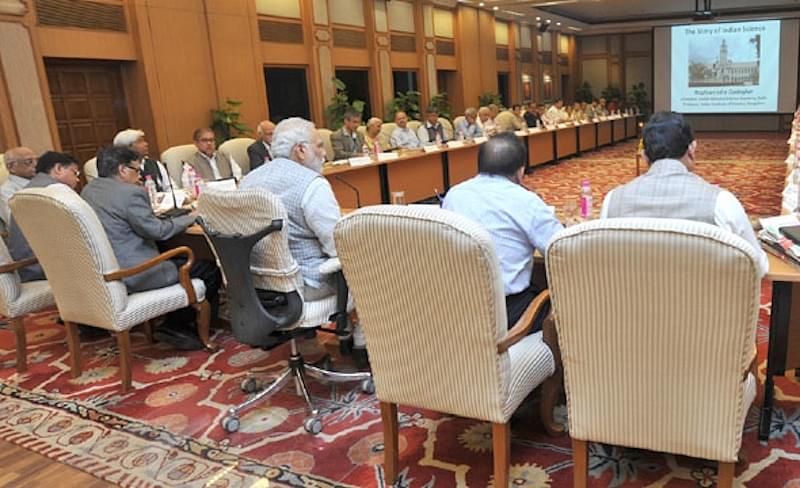 A scientist writes about PM Modi’s meeting with 30 scientists, of which she was one, on August 19. Does the Prime Minister understand the nuances of scientific research and the needs of the scientific community?

There have been reports in the media of a meeting of the Prime Minister with around 30 scientists at his residence on 19th August.  This blog is about my experience and impression of that meeting as (possibly) the youngest person present in it.  As the meeting was organized by the Department of Biotechnology, I thank Professor K VijayRaghavan for this truly awesome opportunity.

Disclaimer 1:  This post is not meant to be a comprehensive report about the event (one can read the news reports for that), but solely my own perception of how it played out.  A lot of it is from memory and some hurried notes I took during PM’s speech: so, I can only paraphrase his statements and not quote them verbatim.

Disclaimer 2: This is going to be a long post.

Although I am not very interested in politics, I have been very curious about Modi government’s thoughts and policies on science in India.  Sadly, be it mainstream or social media, our intellectual elite or journalists, the discourse on anything related to our Prime Minister seems to fluctuate between two extremes: one side considers him as the savior who will solve all of India’s problems in no time and the other side is extremely critical and suspicious of him.  It is very difficult to separate the wheat from the chaff in reading prevalent opinions.  At the same time, as a scientist at a new institute, I cannot help but notice the pressure under which our administration is functioning due to severe budget cuts.

Are the current science funding policies of the government formulated with a view to control the overall government expenditure across the economy or does it have something to do with how high (or low) they place science on their priority list? How does the present regime view science, science in India and the scientific community?

These are questions to which I have been unable to get reasonable answers through our biased (and may I add unscientific) media discourse.  Therefore, when I received an invitation to attend this meeting, I was very excited at the possibility of meeting the Prime Minister and hearing directly his views about science in India.

The agenda of the meeting had been designed carefully.  The PM wanted a discussion on the current state of Indian science and from what I understood in a smaller preparation meeting before we headed out to the Prime Minister’s residence, he had conveyed his eagerness to hear diverse viewpoints.  The secretaries of the science ministries (mostly scientists themselves), therefore, were to play a moderating role and let the other invitees from the science community do most of the talking.

PM Modi interacting with scientists from various institutions on August 19, 2015.

Around 14 people, representing various fields of science, were to give presentations about the progress made and challenges ahead in their respective domains of expertise.  The meeting was to be conducted for two hours and therefore, speakers were requested to respect the time limitations so that there could also be adequate time for discussion.

Before heading out to the PM’s residence, some of the invitees wondered if the PM would be able to follow the numerous presentations and if someone should further summarise the main points of the speakers at the end.  As it turned out, however, Mr. Modi not only listened attentively to each and every presentation, but also kept asking very pointed questions from almost all the speakers.

For instance, when the first speaker presented data about the number of research papers that were published in India every year, Mr. Modi immediately asked how big or small this number was, in proportion to our population.  The very low number of scientists in our country was briefly discussed.

As the presentations continued, he made several remarks, but I only remember a few.  For example, one of the speakers mentioned that in India, once a faculty member becomes a full professor, the only further possible “promotion” beyond that is to become a senior level administrator.  This hinders research productivity and he therefore suggested that we create more positions, equivalent to VCs/directors etc, but in which one would only do research.  The PM caught on to this suggestion and requested the speaker to prepare a detailed proposal.  There were several other talks on topics including biomedical research, agricultural research, research in universities, physics, mathematics, research in industry and research in the north east.

Among his many questions, Mr. Modi had one for mathematicians: he wanted to know if mathematics could solve the problem of call drops in mobile conversations!  Later, when the presentations got over, I made a comment about applications of cryptography and coding theory in communication problems, but that this field is underrepresented in most Indian institutes.

It was only after returning home that I came to know from my brother that the issue of call drops is, in fact, a very contentious issue nowadays and has also been raised in the parliament!

In most presentations, the presenters explained and emphasized the need for sustained funding in science if we were to continue the progress and not slide backwards.

After the presentations were over, it was time to elicit comments from the rest of the audience: by this point, we ran out of time.  But the PM continued to listen to the comments and personally called out the names of people who indicated that they wanted to speak  (either his vision is very strong or he had the seating plans laid out in front of him!).

Since it was well beyond 6 pm, I thought with some disappointment that he would leave and I would not be able to hear his views on science issues in India.  But, he did speak, and from that point, Modi, the orator, took over.

After addressing us as “Aap Diggaj Log,” he started his talk with the observation that we cannot make much progress in the current scenario.  The lack of  openness between the cabinet and scientists as well as overwhelming administrative regulations hindered science.  He recognized that research needs flexibility, and while there had to reasonable checks and balances, one could not expect scientists to keep, in his own words, “pal pal ka hisaab.”  This generated some laughter and applause.

The next point he made was that there was a lot of overlap between the work done by different science agencies, which do not communicate adequately with each other and are unable to work towards common scientific goals of the nation.  He emphasized, as the news reports mention, that instead of working in isolation, scientists have to come together and take a multidisciplinary approach to solving problems.

One point that the PM kept making repeatedly was that the solutions to most of the problems—be it coordination of resources or addressing specific needs of the nation such as Swachh Bharat, cleaning the Ganges, low agricultural productivity, the contradictory problems of malnutrition and food wastage, better utilization of solar energy—would have to come from the scientists and not the bureaucracy.  “Can you do it?” he asked us directly.

He also made some remarks about a disconnect between writing research papers and translating the research into technology.  One of the examples he mentioned was why agricultural research has not addressed the problem of poor yield of pulses in India.

Towards the end of his speech, he said that he has noted our complaints to him: those of science policy, budget and administration.  But, he too has a complaint, namely the scientific community is not broadminded about optimum sharing and utilization of resources.  His wish list for us was sensitivity to India-specific problems, better coordination among science workers and a multidisciplinary approach.

All in all, I certainly understood the PM’s attitude towards science better than before. It was heartening to note his awareness of science challenges in the country and that his thoughts on science are not restricted to Ganesha and plastic surgery, as many journalists would have us believe. But, I am writing as an assistant professor whose research work is mostly of a solitary nature and who does not have to deal (much) with administration and bureaucracy.  People in positions of responsibility, who deal directly with the consequences of budgetary cuts and lack of a coherent science policy would have higher expectations of this meeting and its consequences.

Speaking personally, I came back with a strong feeling that this government perceives the science community as underperforming and wants it to produce more.  Therefore, it is absolutely essential for us early career scientists to keep improving our performance so that we do not feel unempowered in front of any administrator or bureaucrat.  For a scientist, empowerment comes only with productivity.

This article was first published on Dr Sinha’s blog on August 22, 2015.  Dr Sinha tweets as @kaneenikasinha