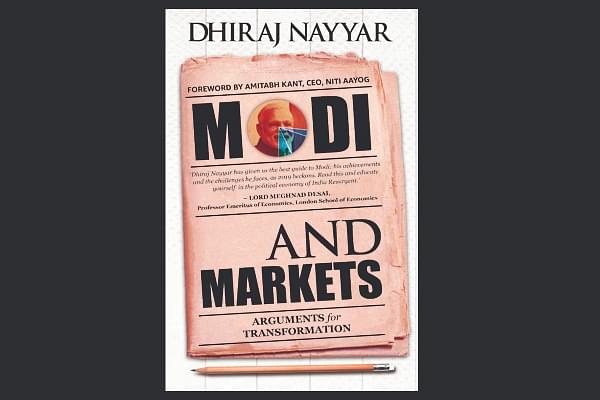 Cover of the book Modi And Markets: Arguements for Transformation

This article was first published in October 2017. With his personal integrity intact, Narendra Modi remains the politician most likely to make a convincing case for a cronyism-free capitalism in India.

India’s politics is uncomfortable with the idea of wealth creation. India’s politicians are immersed in wealth creation. That is the cruel paradox at the heart of Independent India’s inability to climb to a double-digit growth trajectory. For, if any nation wishes to become prosperous in quick time, it must grow at a furious pace by continuously creating vast sums of wealth. Indian politics has stifled that ambition. Indian politicians have nearly killed it. The path to prosperity is hardly a secret; many nations in the West and East have achieved it over the last two centuries. But every country needs an enabling environment for it to happen. For most of India’s history since 1947, the political economy has provided a poor substratum. Prime Minister Modi has taken some steps to shift the ground, but it will take perseverance and reform before a long counterproductive legacy is folded away.

Being the dominant party at the time of Independence, the Congress laid down the principles which would drive India’s economy, polity and society. Neither Gandhi nor Jawaharlal Nehru, despite the considerable divergence of their views on the economy, gave primacy to the notion of private wealth creation. While Gandhi was very focused on small-scale industry and a self-sufficient rural economy, Nehru’s economic vision was influenced by the (erstwhile) Soviet Union in which the State and enterprises owned by it would be at the commanding heights of the economy. After two centuries of Colonialism, one of which involved direct rule by the East India Company, a private capitalist enterprise, there was a general suspicion of the profit motive. B.R. Ambedkar may have temporarily prevailed by preventing the insertion of the word ‘Socialist’ in the Constitution—he did not believe that the founders of the Republic should tie India down to one system forever—but it was the Left-wing of the Congress which dominated India for the first four decades after Independence. For the dominant Congress, poverty alleviation was the main slogan. Somehow, wealth creation was not a strategy adopted for that noble end goal. That has continued till this day, when Nehru’s great-grandson is in effect the leader of the party.

The BJP has had less influence on the political economy of Independent India, having ruled at the Centre just once in a coalition (between 1998 and 2004) before Modi won a parliamentary majority in 2014. But now that it is the major national party, its thinking matters. The Integral Humanism of Deendayal Upadhyaya, the long serving chief of the Jana Sangh in post-1947 India, is the philosophical foundation of the BJP’s economic thinking. Upadhyaya was critical of both socialism and capitalism, which he believed were too focused on materialism (artha and kama) while neglecting dharma and moksha, not defined as religiosity per se but as a set of values and a spirituality beyond the material. The BJP’s intellectual mooring does not entirely reject wealth creation even if it does not put it upfront. And the traditional core constituency of the BJP has consisted of wealth creators.

Of course, India’s economy and indeed the global economy have evolved over time. The most damage inflicted upon the economy was when Indira Gandhi became prime minister and policies took a sharp turn Left-ward. The Congress aversion to private profit only became stronger and resulted in the nationalisation of banks, restriction of foreign investment and draconian laws restricting the size of enterprises. In 1947, India may have needed the government to play a big role. By the 1960s, the task of wealth generation should have shifted to the private sector, which had greater capacity, as it did in many East Asian countries. However, India’s political economy went in a different direction. The word ‘Socialist’ was inserted into the Constitution.

India’s boom years ought to have created a constituency of young Indians who’d have greater faith in wealth creation and free markets than earlier generations did.

A pernicious side effect of the shift was the introduction of a licence-quota raj which allowed some selected private entrepreneurs to flourish at the expense of efficiency and consumer interest while forming a close nexus with government. It was the years between 1966 and 1977 that saw a culture of corruption take deep roots. India had to deal with a double whammy. Ostensibly, wealth creation and private profit were discouraged, leading to low rates of growth. However, the fostering of a small crony capitalist elite meant that capitalism would acquire a bad name. Capitalism thrives only when there are competitive free markets and not when the government controls them tightly. But socialist India knew only two kinds of capitalism—the East India Company kind and the crony kind.

A decisive break from socialism took place in 1991 in the backdrop of an economic crisis. The existence of a crisis provided politics a cover for undertaking radical reforms which disturbed vested interests. The dreaded licence-quota raj was quickly dismantled for a number of industries and sectors. For the first time, private enterprise, whether domestic or foreign had the freedom to grow wings. Unfortunately, politics never changed its rhetoric. P.V. Narasimha Rao, India’s reformist prime minister, could never quite summon himself to do a Deng Xiaoping by declaring that ‘to be rich is glorious.’ He couldn’t even make the other famous Deng proclamation, ‘It doesn’t matter if the cat is black or white, as long as it catches mice.’ Politics would continue to reform by stealth while pretending to be socialist in public.

Things may have finally changed in the first decade of the 2000s when the government of Atal Bihari Vajpayee went ahead with several bold reforms, including the privatisation of some public sector companies. This was also the period when Indian IT, led by the likes of Infosys, Wipro and HCL became world beaters without any help from the government. No one grudged the wealth India’s IT entrepreneurs generated because it was seen as justly earned. Unfortunately, the defeat of India’s first non- socialist government in 2004 turned the clock back. Ironically enough, the period between 2003 and 2012, which saw India’s highest ever growth of nine per cent plus per annum, laid the seeds for a further de-legitimisation of capitalism, capitalists, politics, politicians and the wealth they had accumulated.

India’s boom years ought to have created a constituency of young Indians, who grew up in liberalised India, who would have a much greater faith in wealth creation and free markets than earlier generations did. However, the virulent crony capitalism that was unleashed in the boom years ended in policy paralysis and slowdown post 2012. The problem wasn’t free markets but continued government discretion in sectors like telecom, coal and other natural resources. Public–private partnerships which were mooted to solve India’s infrastructure deficit descended into a farce, with profits privatised and losses socialised. So even while a majority of Indians benefitted from high growth, the perception that too many people had acquired wealth based on a nexus with government stood out. The rich and wealthy were deemed crooked, just like the East India Company or the entrepreneurs of the 1970s. That many politicians became businessmen and crorepatis many times over in the post-liberalisation era also turned public perception against the manner in which the system had evolved. The scale of corruption and wealth accumulation by sundry politicians took on a whole new dimension compared with the pre-1991 era.

The challenge for India and India’s current leader is to separate genuine wealth creation from crony capitalism. Prime Minister Modi is trying hard. He has taken strict action against corruption and cronyism, while encouraging genuine entrepreneurship, particularly in the young generation through initiatives like Startup India. He is the first Indian leader to openly campaign on the promise of minimum government in a country where the government has been larger than life even after 1991. Modi’s personal integrity is a great asset in his quest to convince India of the merits of honest wealth creation. Unlike many other politicians, he is not using politics as an avenue to enrich himself or his family. That gives him an unusual legitimacy and moral authority. The fact is that India cannot solve the problem of poverty or complete its quest for inclusiveness by redistributing a small cake. The size of the cake needs urgent expansion and only wealth creation can do that.

Modi has an intellectual anchor in his quest. Deendayal Upadhyaya’s philosophy of Integral Humanism could play an important role in creating a framework for a well-functioning market economy which eschews cronyism and other types of wrongdoing while creating wealth. Integral Humanism has a moral dimension which is important in a country reeling from amoral, if not immoral, capitalists. Perhaps, unlike Deng Xiaoping, we should care about the colour of the cat.

(This article was first published in the Open magazine.)

Excerpted with permission from ‘Modi and Markets: Arguments for Transformation’ by Dhiraj Nayyar, Published by Westland (October 2018).

Dhiraj Nayyar is chief economist at Vedanta. He tweets at @nayyardhiraj.