Can The Humble Auto Rickshaw Drive Into The Digital Age? 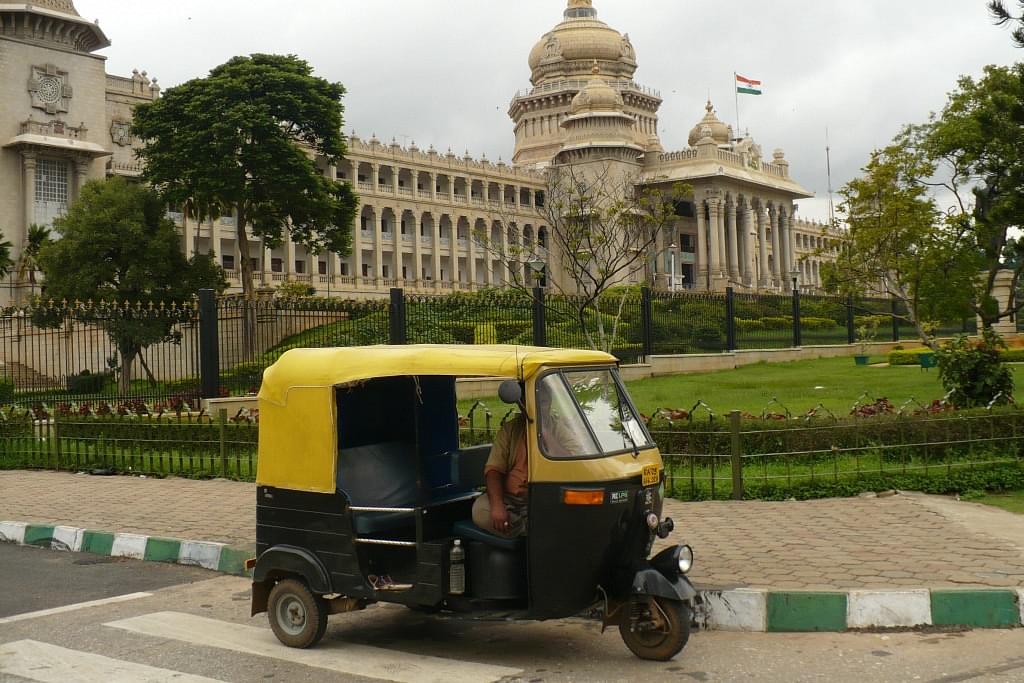 The Benz Patent Motorwagen, manufactured in 1885, is considered to be the first practical automobile was a three-wheeler. The world’s first four-wheeled automobile was built by Gottlieb Daimler in 1886. Some accounts also claim that Benz and Daimler invented their machines in the same year.

Though Karl Benz gets the credit for being the inventor the ‘automobile’, much of the western world has not preferred to use his three-wheel option. Perhaps, Karl Benz would be happy to glance over India from the heaven (or hell) and see three-wheelers in large numbers.

The automobile sector grew faster in the West than in the east as the levels of prosperity of an average citizen was much higher. Ford’s innovation in the mass production of cars made it affordable for many families. Recovery of post-war West Germany was aided by the growth of its automotive sector. Mass ownership of cars became synonymous to capitalist economies in the 20th century.

But that was not the scenario in developing nations like India. After colonised nations gained independence in the second half of the twentieth century most of them opted to redistribute wealth and set up a socialist society. This economic policy led to low industrial growth, thereby restricting the possibility of overall economic growth in their respective economies in general and consumer durable sectors in particular. Thus, the business case for a mass produced car in developing countries like India was a poor one until the fall of communism/socialist ideas.

This economic and political scenario in the mid-20th century made space for a uniquely Indian transport option in urban and semi-urban areas – the auto rickshaw. It was a hybrid of the manually/animal pulled rickshaw and an automated two-wheeler. It is, therefore, no surprise when one learns that the first opposition to the introduction of auto rickshaws in Bengaluru (1950) came from the Jatka (horse-drawn cart) lobby.

Auto rickshaws were perfectly suitable for urban spaces, where a large number of people belonged to the middle class. The Indian middle class until the 1990s did not have enough disposable income to buy a four-wheeler. At the same time, poor public transport options opened up the market for private players in urban transport. The auto rickshaw, an automobile that costs half the price of an average car, thus became the symbol of urban transport in India, and later in several developing countries.

In 1959, the Bachraj Trading Corporation Private Limited obtained the licence to manufacture two- and three-wheelers. Until then, the company was importing auto rickshaws from its Italian partner Piaggio. The company later changed its name to Bajaj Auto Private Limited. N K Firodia, who was a partner of the Bajaj, is considered to be the pioneer of auto rickshaw business in India.

However, the operations of the company were strictly curbed by the infamous ‘licence raj’. In a book commemorating the contributions of Kamalnayan Bajaj to the company, the extent of government intervention in production plans of automotive sector are blatantly visible.

The requirement of the country could have been much higher. But the company’s growth was hindered by the Monopolies and Restrictive Trade Practices Act, 1969, under which government had enormous powers to curb the expansion of private sector. But these were the days during which the company gained mastery and competence to tap the booming market which came later. In addition to the domestic market, Bajaj is also a leading exporter of auto rickshaws to other developing countries in South East Asia, Africa and South America.

In 1973, the company began exporting three-wheelers to Nigeria, Bangladesh, Australia, Sudan, Bahrain, Hong Kong and Yemen. In 1977, the company introduced rear engine auto rickshaw and sold 100,000 vehicles in one financial year. Reports in 2016 said that India was the largest three-wheeler industry in the world.

Today, the auto rickshaw powered transport sector employs millions of drivers in urban/semi-urban India. With the growth in taxi aggregators like Ola and Uber, these drivers have been co-opted to provide urban transport solutions in the internet age. However, their survival depends on their relative affordability in comparison to taxis. Though the older generation depends on auto rickshaws, it will be interesting to see how the humble auto rickshaw adapts to the internet age in coming days.