Infy May Need To Deliver “vishal sikka”, Big Money, To Get NRN Off Its Back 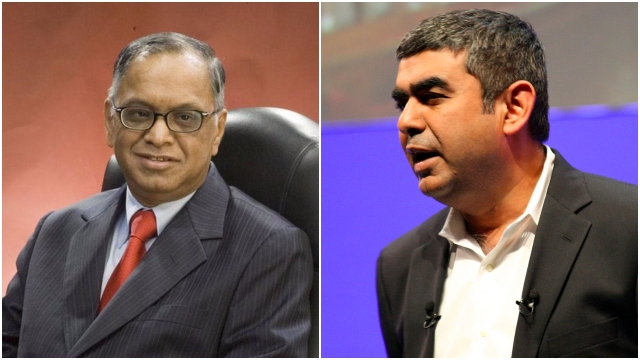 King Henry II managed to end his troubles with Archbishop Thomas Beckett by asking loudly, “Will no one rid me of this troublesome priest?” Four knights saw the question as a request to murder Becket, and it got done. Vishal Sikka and the Infosys board do not have the same luxury of wishing away the presence of troublesome founder and former Chairman NR Narayana Murthy. The tensions between the Infosys board, CEO Sikka and Murthy do not look amenable for easy solutions.

If yesterday’s (3 April’s) newspapers were full of Murthy’s lament about loss of corporate governance at Infosys and the need for “compassionate capitalism”, today’s dailies had experts pontificating about the need for less greed in boards, and a rebuttal by the Infosys board that the salary hike proposed for COO UB Pravin Rao was hardly over the top. According to the board’s calculations, the effective pay hike was only 1.4 per cent, and not the 60-70 per cent alleged by Murthy.

The actual pay hike will obviously depend on Rao’s performance, since a lot of it is variable, but it is clear that Murthy may continue to remain a thorn in the board’s side unless it can find a way to get him to back off.

After the last quarrel with the board over the high severance package given to CFO Rajiv Bansal in 2015, Murthy is believed to have promised to voice his views in private and not go public, embarrassing the board. But he has still chosen to do so this time.

What the board must now do is to assess what is really getting Murthy’s goat, for he is not going to quietly walk into the sunset.

From the outside, there are two possible explanations for Murthy’s repeated attempts to damage the reputation of the company he founded by charging it with failures on a corporate governance front, when this is far from certain.

One could be the traditional unwillingness of older people to let go. Just as parents find it tough to let their adult children make their own decisions, including mistakes, Murthy seems unreconciled to allowing Infosys to take the road it feels is right for it at this stage. If he isn’t able to let go of the company he founded, the board should find a way to ease his way out.

It is equally possible that Murthy wants to exit the company, so that his wealth in not locked up in a company he does not quite trust anymore. But the problem may be that the current share prices are not lucrative enough to sell.

The logical way out is for the board to have a quiet conversation with Murthy and find out what he wants, and possibly offer a buyback of shares so that promoter-shareholders can find a partial exit through this route.

Maybe all the angst is about how to make an exit at a better price without making that a public issue which could damage Murthy’s well-crafted reputation for not being money-minded.

It is worth recalling what Murthy said, possibly in jest, when he announced that Vishal Sikka would take over as CEO of Infosys in 2014. Murthy said he had asked Vishal what the word Sikka meant, and the latter said it meant money. Murthy added: “Vishal Sikka means big money and I think we need that in Infosys now.”

Maybe, just maybe, Murthy would be happy to receive “vishal sikka” in the form of a large buyback offer from the company.