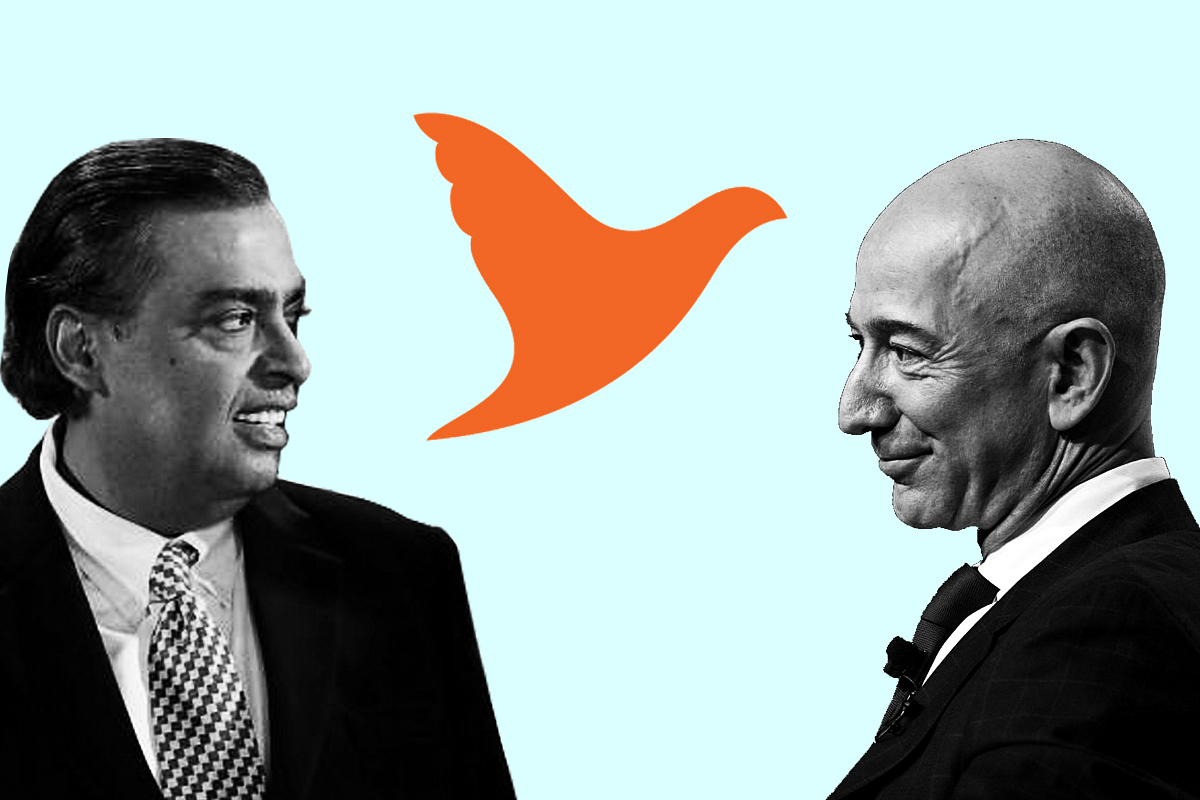 From Singapore, where the arbitration verdict on the buyout deal between Future Group and Reliance Industries Ltd. worth $3.4 billion was stalled, the feud has now reached the legal corridors of the national capital.

After the launch of JioMart last year, in the middle of the Covid-19-forced lockdown, Reliance made the next big move by acquiring a cash-starved Future Group.

In the deal, the Future Group was selling its retail, wholesale, logistics, and warehousing businesses to the Reliance Group.

The highlight of the deal, from the Reliance perspective, was getting ownership of the retail chain ‘Big Bazaar’, fashion and clothes supermarket chain ‘Brand Factory’, and other retail units, thus adding more muscle to Reliance Retail, furthering its invincibility in the Indian market.

Following the announcement, Amazon, in October, accused Future Group of breaching an agreement with them. In 2019, Future Retail had signed a deal with Amazon where the latter acquired a 49 per cent stake in Future Coupons, the promoter firm of Future Retail in a deal of nearly Rs. 2,000 crore.

This agreement ended up being the Achilles heel for the Reliance-Future deal because the deal between Future Retail and Amazon included a provision for Future Retail’s products to be a part of Amazon’s new retail plan.

Tapping into the strong brick-and-mortar network of Future Retail which has over 1,500 stores in India, Amazon wanted to introduce two-hour deliveries in selected cities.

As per some reports, the deal also gave Amazon a ‘call’ option, enabling it to exercise the option of acquiring all or a part of the Future Coupon’s promoter, Future Retail’s shareholding in the company, within 3-10 years of the agreement.

Thus, the entire legal feud has boiled down to a violation of a non-compete clause and a right-of-first-refusal pact for Amazon in its deal with the Future Group.

However, the tug of war between Amazon and Reliance for Future Group goes beyond a legal tussle, for the big Indian retail stakes are humungous. The data tells the story.

India will be the third-largest consumer market in the world by 2025, and currently the fourth largest after the United States, China, and Japan.

Already, by 2017, the retail and e-commerce sector had a market size of close to $800 billion.

However, 88 per cent of the retail sector continues to be unorganised, with merely 9 per cent of it organised and the remaining 3 per cent under the e-commerce sector.

For both Reliance and Amazon, and even Walmart and now Tata, the opportunities in digitising the Indian retail sector were huge.

In terms of contribution to GDP as well, the retail and e-commerce sector plays an important role, contributing more than 10 per cent, and generating 8 per cent of the total employment.

However, with digitisation, e-commerce, and other digital services, the employment would have only increased. Already, the National Skill Development Corporation (NSDC) expects the sector, across segments, to generate 56 million jobs by 2022.

The future potential in the sector is humungous as well. The e-commerce sector is expected to have a market size of more than $200 billion and the retail sector alone would have a market value of close to $1.3 trillion.

Some reports put the figure for the complete retail sector (including e-commerce) at $1.75 trillion by 2026.

Beyond the big numbers, the fight between Amazon and Reliance Retail along with Walmart and Tata is rooted in India’s farmers and local grocery stores, and the opportunity that lies in ushering them on the path of digitisation.

Swiggy, with 140,000 eateries on its platform, made 1.4 million deliveries each day last year, thus serving as a testament to the potential of the Indian retail and e-commerce sector.

The attitudinal shifts towards digitisation have a lot to do with the stakes as well. By 2025, in terms of expenditure, 30-35 per cent or $550 billion would be via digital spending.

At the current trajectory, India will have close to a billion internet users by 2025, with 35-40 per cent of them under the age-group of 25. Online shoppers are also expected to increase from a mere 15 per cent today to 50 per cent by 2025.

For Reliance, with JioMart, the push has already been made to inculcate 30 million small merchants, 60 million small and medium enterprises, and 120 million farmers.

Think of the online potential here, from farms to home, and from stores in cities to homes.

It was reported that during the lockdown, Reliance registered more than 4,00,000 orders each day. Given their partnership with small neighbourhood retail stores (kirana shops), Reliance could cater to these orders while being a new platform with minimal marketing.

Amazon is also not far behind in reaching out to the farmers of India. Already, the global e-commerce giant offers an array of online products including the world’s biggest e-commerce store, streaming service, grocery services, digital payments (Amazon Pay), ticketing services, and point-of-sale finance products.

In 2019, Amazon was already running a pilot project in Pune to source fresh produce directly from the farmers under its farm-to-fork initiative. The idea was then to sell the products through Amazon Pantry and Amazon Fresh.

In 2017, Amazon made a $500 million investment in the food and grocery segment in India after approval from the government.

Amazon has also been working overtime to onboard kirana stores to strengthen its e-commerce segment. In April 2020, Amazon India announced an investment of $1.3 billion to onboard 5,000 local kirana stores across 100 cities.

Thus, for both Reliance and Amazon, aiming for invincibility in a market of 1.3 billion people, and a market worth trillions five years from now, Future Group is an important chunk of the pie, one they both can’t let go off.

With renowned brands like Big Bazaar, both Godzillas of retail want to muscle their way deeper into the Indian market.

Eventually, both will continue to thrive in the Indian market. However, there will only be one winner of this Amazon-Future-Reliance tug-of-war. It’s a battle of the highest stakes.