What 2019 Holds For Investors: Sensex Should Deliver, But Will Be Volatile 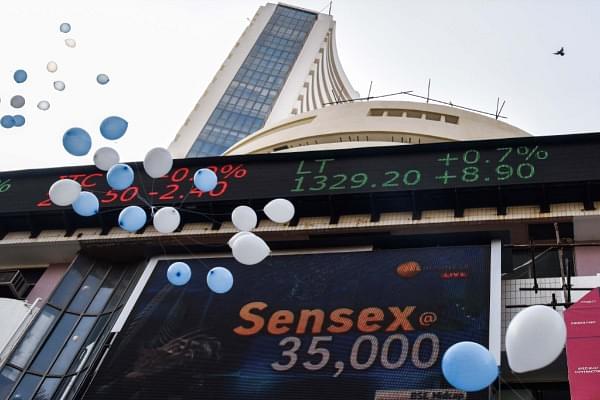 The digital broadcast on the facade of the Bombay Stock Exchange. (Kunal Patil/Hindustan Times via Getty Images)

Indians have not had a good year in stocks, but they should be happy that they are still in the positive zone. Over the last one year, yields on the Sensex have been in the 4-5 per cent range, when the US Dow Jones and S&P have crashed 19-20 per cent.

What this suggests is something interesting: what happens on Wall Street does impact sentiment here, but there has been a degree of delinking from global cues in 2018. Put another way, a large part of the small gains our indices have recorded are local in origin. Indian investors are driving the markets more than foreign institutional investors (FIIs). It could remain that way even in 2019.

As on 18 December, the FIIs had sold off a net Rs 36,000 crore of Indian stocks, but mutual funds had invested Rs 115,000-and-odd crore around the same time. This divergence between the Dow and the Sensex has been largely powered by retail investors, who, until November, had invested over Rs 60,000 crore through SIPs (systematic investment plans). Even though this includes investment in debt instruments, essentially Indian retail investors compensated for the skittishness of foreign investors.

This is particularly remarkable for the average SIP size is only Rs 3,200 per account, according to data provided by the Association of Mutual Funds in India until November. 2018-19 will probably channel the largest volume of retail funds into the markets ever, crossing the previous high of Rs 67,190 crore in 2017-18, when the markets were chirpier. The retail investor is thinking long-term, and not running away when faced with market downturns. Smart.

So, what does this mean for the future of the stock markets, and investment in general, in 2019? The following factors have to be kept in mind:

One, 2019 is election year, and so markets will be volatile, especially around the time major pre-poll surveys or results are to be announced. If the Bharatiya Janata Party fails to come back to power, either alone or in a coalition, the markets could briefly collapse, until we know the composition of the next government. But that seems a small possibility right now. So, sit tight and watch the polls.

Two, the Sensex will probably quote in the range of 32,000-42,000 during the year, as long as there are no major political shocks ahead. This forecast may hold true after May 2019 rather than before, where a tumble cannot be ruled out.

Three, interest rates should go down in the short-term (next three to six months) due to a structural shift in retail inflation downwards (CPI was 2.33 per cent in November). This means stocks should remain steady since rates and stock valuations are inversely related.

Four, with the rupee holding steady in the Rs 68-72 range, foreign investors looking for safer bets outside the US, where rates may rise a bit even in 2019, could return to India. This augurs well for stock performance.

Five, election spends and freebies in the run-up to 2019 will give economic growth an extra bounce in the current and next two quarters. IIP in October was already at 8.1 per cent, and the investment cycle seems to be reviving, with capital goods growth in April-October being a healthy 8.7 per cent; infrastructure and construction, and consumer durables are also growing lustily at 8.7 per cent and 9.4 per cent respectively. This speaks about revival. Gross fixed capital formation was at 32 per cent in April-September 2018, again indicating some return of investment intentions among businessmen.

Six, the banking sector, now being revived through extra doses of capital and loan recoveries from the bankruptcy courts, is in revival mode. The slight weakness in the non-bank financial sector means that banks will end up buying some of their better assets, leading to higher credit growth. Bank stocks are worth watching, especially public sector banks. Private banks, of course, will continue to do well, but are already richly valued.

Seven, the themes for 2019 will be infrastructure, real estate, especially if cement duties are cut, and consumer goods. IT and pharma – both focused on exports – are also expected to do moderately well. The former from greater shift to digital spends, and the latter due to some degree of undervaluation. Both sectors underperformed as the rupee recovered, but in 2019 they should grow from intrinsic strengths.

Eight, gold should remain part of the portfolio, and will do well in Indian rupee terms. In 2018 so far, it has yielded a return of 6.7 per cent. If you are buying gold for investment, better to buy sovereign gold bonds, which yield not only capital gains (which are tax-free), but also interest of 2.5 per cent (taxable). If gold prices rise another 6-8 per cent in 2019, sovereign gold bonds will yield an additional 2.5 per cent before tax.

Nine, avoid real estate. Real estate is still not an investment worth looking at. The sector captures most of its value outside listed entities, and so if the only way to invest in real estate is actually buying a house, it is not a great idea in the current depressed price conditions, where housing inventory vastly exceeds demand in many cities. Buy a house only if you are going to stay in it, and you can afford the EMIs.

Ten, long-term tax-free public sector bonds from NHAI, PFC and IRFC, and other such companies, currently offer yields to maturity of above 6 per cent, and this is particularly useful for pensioners and those looking for steady, tax-free retirement incomes. These bonds are traded in the capital market, but are often illiquid. So, you may not get enough of them. And you can’t sell them if you suddenly need the cash. But they can be added in small amounts to the portfolio. A 6 per cent tax-free yield means over 8 per cent post tax.

Above all, re-examine your asset allocation. Depending on your risk-appetite, invest only your long-term savings in equity. Keep the rest in safer avenues like bonds or fixed deposits, including post office schemes. If your equity portfolio has risen to 70 per cent due to market trends when you want only 60 per cent in equity, sell some shares and shift them to bond funds.

Next year (2019) should be reasonably good for investors, but volatility will be a problem for stocks and bonds.