Indian Economy: What Is The Outlook For Key Sectors In 2022? 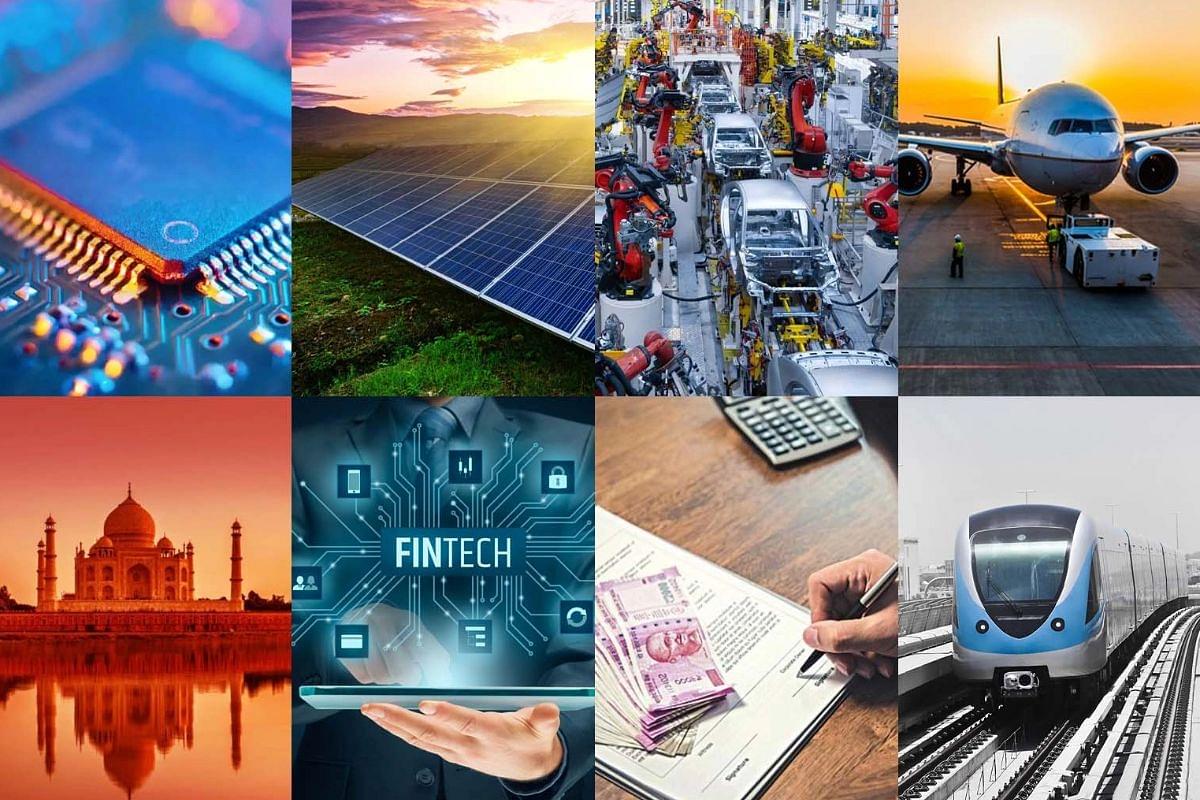 With challenges faced by various sectors due to Covid-19 pandemic and semiconductor shortages, here's what we can expect in 2022 from the following sectors.

Another boost for the infrastructure sector comes from the implementation of the National Infrastructure Pipeline (NIP), through which the government hopes to build better infrastructure for the nation. The NIP is looking into opportunities across sectors such as transport, logistics, energy, water, sanitation, communication, commercial infrastructure and others.

Over the last one year, Nifty Infra Index has given almost 40 per cent returns, which is much higher than the returns given by the broader index. Clearly, investors are expecting strong growth in the infrastructure sector.

Semiconductor shortages have been a highly publicised affair, with several diverse industries being affected due to the shortage. The semiconductor industry is crucial for the chip manufacturing industry, which in turn produces components that are crucial for a wide range of applications all over.

The high demand for semiconductors is evident in the Philadelphia Semiconductor Sector Index, which is a market capitalisation-based composite of the 30 largest semiconductor companies.

The index has moved up from around 1,300 points in March 2020 to around 4,027 points currently. The industry has remained cyclical for years. However, the supply chain shock combined with high demand for semiconductors resulted in a prolonged shortage. It is possible that the shortage could continue for a while, according to experts.

With India’s heavy dependence on semiconductor imports, the government has decided to provide Production Linked Incentives (PLI) to players looking to set up manufacturing facilities. The centre would be looking to provide land, utilities, and the required infrastructure to help companies investing in the scheme.

For certain parts of the project, the government plans to provide around 30 per cent of capital expenditure. Several companies have shown interest in semiconductor manufacturing.

On an industry level, several structural changes could be underway currently. For instance, companies have begun producing customised products suitable for their products rather than using generic chips in order to differentiate the products. Apart from India, several other governments are enabling programs to support the semiconductor industry’s growth.

The power sector appears to be on the cusp of a “green revolution” with three of India’s largest business houses – Tata, Reliance, and Adani, looking to capitalise on the shift to renewables. While the Adani and Tata Group had entered the power sector long ago, Reliance Industries had stayed away from the sector.

Like always, Reliance’s entry into the space has been marked with large investments, acquisitions, and a focus on scale. The company has already made several acquisitions in the space for minority or controlling stakes.

However, renewables by themselves are not reliable producers of energy as energy production varies with the weather. Therefore, during periods of high supply and low demand, power must be stored to be supplied during a period of low production and high demand. Consequently, the energy storage space is seeing increased activity.

From a regulatory perspective, the new Electricity Bill can help strengthen the finances of the sector if implemented sincerely. Further, implementation of the solar manufacturing PLI could help cut down on the dependence on Chinese imports while allowing India to become self-dependent.

Apart from commercial vehicles and three-wheelers, 2021 was not a great year for automobiles, with the festive season witnessing the worst off-take in years. However, an increasing preference for EVs over traditional two-wheelers was visible in sales data.

While the past years saw EVs take over the three-wheeler space, 2021 saw the sales of two-wheeler EVs grow rapidly while sales growth in the conventional fuel space stagnated in the domestic markets. Most EV companies are dependent on China for the raw materials for EVs. Nevertheless, some companies are working towards making India self-sufficient in the sector as well.

From an infrastructure perspective, different players are betting on different technologies like charging stations and battery swapping. Both methods have their own disadvantages and advantages. Reliance is betting on battery swapping by building swapping stations to reduce downtime. In contrast, Ola and Ather Energy are betting on fixed batteries that are charged regularly. 2022 could offer some clarity in terms of standardisation in the industry.

Incumbents have been pushing for the production of electric vehicles, with several companies spinning out the EV unit. With a separate unit, these companies can sell equity and bring in an equity investor into the business. Tata Motors has already brought in investors in the EV unit, while Mahindra and others have either announced plans to bring in investors.

Nevertheless, conventional fuel vehicles are likely to remain the bread and butter for these companies. Some market experts expect the auto sector to do better as a whole, in 2022.

The aviation space has been in the doldrums in terms of financials as it struggled with price caps, capacity restrictions, lockdowns, increasing fuel prices, lower Rupee trend and other issues. The sector, along with other segments of the tourism sector, felt the full brunt of Covid.

In addition, the government’s price caps that defined both the top and bottom of the ticket price range did not help the sector much. All the incumbents posted losses during the year, with air travel volumes continuing to remain lower than the pre-pandemic levels for the year.

Yet, several players, both existing and new, expanded their hold on the sector. Rakesh Jhunjhunwala-backed Akasa announced its entry in the space, while Jet Airways looked to relaunch itself once again. The Tatas bought out the government’s stake in Air India as well, and will nurse the airline back to health.

Increasing competitive intensity in the sector, lower demand, high fuel cost, and an unfavourable exchange rate for India could spell trouble for the sector in the near term. However, over the longer-term demand is expected to return to pre-Covid levels.

India has a strong comparative advantage in software, and the pandemic has accelerated the growth of software companies. Over the previous year, the Nifty IT index has risen by around 50 per cent as the need for IT solutions rose across the globe.

In addition, the fall of the rupee against the dollar would mean higher revenues for these companies. Apart from traditional service-oriented IT companies, several new-age product-oriented technology companies have become popular among market participants as well.

The public markets rewarded companies such as Nykaa, Policybazaar, Zomato and several others with high valuations. Similarly, the private markets have been attributing high valuations to technology companies as well.

The Securities and Exchange Board of India (SEBI) had initially eased standards to allow new age technology companies to raise money from capital markets. The previous year saw the highest number of technology companies reach the coveted unicorn status in Indian history. Investors expect the trend of an offline to online shift across industries to be a value creator over the long run.

Vertical e-commerce becoming popular among audiences, as compared to horizontal platforms such as Amazon, could be another trend that is likely to continue into 2022. These companies cater to more niche products rather than sell generic products.

Further, the government recognising the need for recognising cryptocurrencies could help regulate the sector and ease concerns. If the crypto markets do well, people are likely to continue trading in the “asset”. Other innovations such as non-fungible tokens have been well received by artists, filmmakers and others as well.

Several Indian start-ups are focusing on building/helping build the “metaverse” as well. Overall, the technology space is likely to grow at a rapid pace in the future as well.

Travel and tourism were among the worst hit sectors in the pandemic, but appears to be recovering, albeit slowly. According to hotel industry experts, room rates and occupancies have risen with demand picking up.

Though many jobs were lost, employment has been growing back to pre-Covid levels in the hospitality sector. A part of the labour force has found employment in newer arenas such as dark kitchens as well.

The sector has turned to innovating with “workcations”, “staycation” and other products launched by hotels and tour organisers. Several industry reports have cited “revenge tourism” as a reason for the high travel momentum as well.

Assuming a devastating third wave does not occur in India, domestic travel demand alone should help the sector do well over time. So far, despite low international travel, domestic travel momentum has continued.

With “fin-tech” becoming a buzzword over the last few years, the sector has been touted as a disruptor to the banking space. According to enthusiasts, these companies are disruptors in a space completely dominated by banks. In India, these companies have only been enablers for existing banks and non-banking financial companies.

Fin-tech companies have attempted to convert themselves into a supermarket for financial products. Almost all fin-tech apps offer the following services – lending, brokerage, mutual fund distribution, payments services, e-commerce, ticket booking and others. Buy now pay later (BNPL) is another recently introduced digital variant of the point-of-sale credit. With more granular consumer data, fin-tech firms claim to have an advantage over traditional banks.

The income from these businesses is yet to justify the investments made into the platforms. Ultimately, lending has remained the only option for fin-tech companies. But, with Reserve Bank of India’s regulations, they have to partner up with existing offline lenders in order to lend. Ultimately, incumbent banks and NBFCs remain beneficiaries of the digital lending boom.

Nevertheless, a new report by the Niti Aayog has brought forward the idea of Digital Banks that lend on their own account and earn revenues while maintaining low costs. A digital bank could be a game-changer with lending freedom, low cost of capital, no physical branches, and government support.

As highlighted earlier, crypto is another popular innovation in the fin-tech space. But, whether it finds practical usage beyond being a trading asset remains to be seen.

Banking remains a crucial part of the economy, with its deeply entrenched roots across sectors. The Indian banking system came out of the NPA turmoil a few years back and was immediately thrust into the pandemic.

According to industry data, the NPA situation has remained in control so far. With companies expected to begin the capital expenditure cycle again, healthy banks are likely to do well during the investment cycle.

Another sectoral shift has been the increasing focus on retail lending as compared to corporate lending. With NBFCs and Banks focusing on making, retail loans are higher than the loans made to industry.

Intense competition could lead to lower underwriting standards as well. For instance, RBL has a high proportion of retail loans with high-risk credit card loans. For other banks such as HDFC and ICICI, such risky loans form a much smaller portion of their loan book.

Banks are likely to do well over time, with some stronger banks taking away market share from weaker banks with low underwriting standards.