Why A BRICS Ratings Agency Is The Need Of The Hour 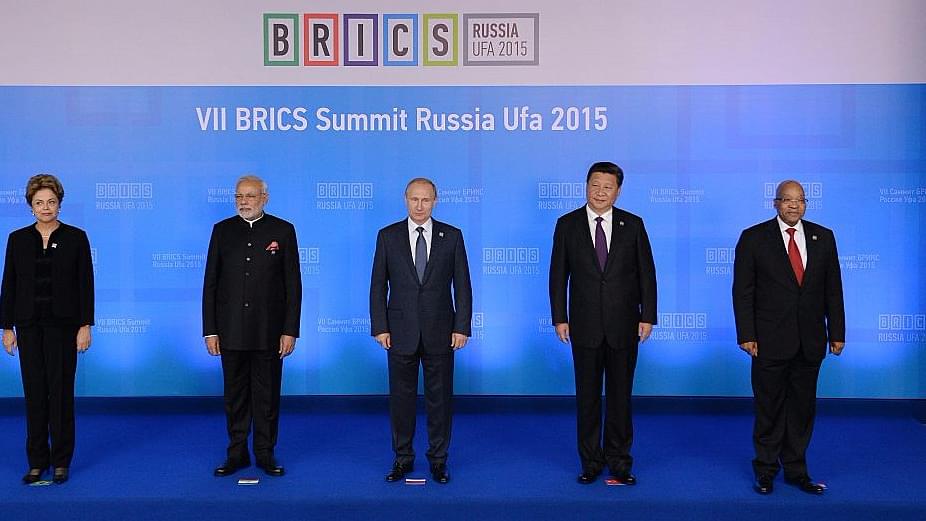 The BRICS leaders at a summit in Ufa, Russia. (GettyImages)

At the BRICS summit in Goa last October, five nations agreed to explore the possibility of launching a credit rating agency. The following month, S&P decided to leave India’s sovereign credit rating unchanged. The way events surrounding India’s credit rating have been unfolding are of great importance and significance. They point to many inherent flaws in the sovereign rating architecture.

It has been more than 13 years since India’s credit rating was last changed. The Organisation for Economic Co-operation and Development secretary general came out in support of an upgrade in India’s credit rating and believes that these agencies have been “ultra-cautious” since the crisis. Credit ratings are extremely important as they influence the rate at which sovereigns borrow but also influence the private sector borrowings of the country.

In recent times, credit ratings have become a socio-technical device of control. The sovereign credit rating market is an oligopoly, controlled predominantly by three rating agencies. The pronouncements of these rating agencies have performative effects and wield the power of becoming self-fulfilling prophecies. Once a rating is given, free market actors make investment decisions as though the country belongs to that class, even if it is contrary to reality. Given the pro-cyclical and lagged nature of ratings, these ratings soon become self-fulfilling prophecies as they impact borrowing costs and capital inflows.

This has been seen in the case of India’s ratings in the last decade. By 2003, many investors across the globe (and Moody’s) realised that India was investment grade. This resulted in the net investments by foreign institutional investors (FIIs) shooting up to Rs 31,327 crore in 2003 from Rs 3,733 crore the previous year. Despite strong economic growth and external balance sheet with an improving fiscal position, it wasn’t until 2007 that FIIs reached Rs 75,967 crore. Towards the end of 2006, Fitch revised India’s rating to investment grade followed by S&P in January of 2007.

The methodology of these rating agencies has been a point of contention for years. Ratings are a function of quantitative (risk) and qualitative (uncertainty) factors across numerous components such as, but not limited to, political flexibility, economic prospects, fiscal flexibility, monetary stability and external flexibility. Political and economic are clubbed together to form the institutional and governance effectiveness and economic profile while fiscal, monetary and external make up the flexibility and performance profile. These two parts are given a score each. The point on intersection of these scores after being plotted on a matrix results in the credit rating.

While these categories are available publicly, the manner in which the quantitative and qualitative blend to arrive at scores is secret. Certain academics believe that the synthesis of risk and uncertainty by the credit rating agencies depict how well a government adheres to the logics aligned with the Anglo-American version of capitalism and not a country’s unique economic landscape.

Each country has its own unique political economy and thereby coordination and control mechanisms requiring a unique approach to assess its credit worthiness. Local contexts and conditions are dynamic and keep changing over time. S&P, in one of its research papers, acknowledges the fact that these “analytical variables are interrelated and the weights are not fixed, either across sovereigns or over time”.

‘Political risks’ such as the government’s willingness to pay, the legitimacy of the government, keep changing over time and are not cyclical. Many of these ‘political risks’ are in fact ‘political uncertainties’ and cannot be modelled using probability distributions as there is an implicit assumption that future events will be like past events as these are built on historic data. There also is the issue of the frequency and magnitude of an event.

The major learning from the financial crisis was the underestimation of the level of interconnectedness and its consequence. This is a result of the clock work view of the economy rather than a systems approach to the economy. It is vital to recognise that disaggregation of government into components and judging them individually will not account for the synergies between these components and their emergent properties. There are network effects in an economy which are difficult to model.

Credit rating agencies need to factor in how resilient and networked these ‘systems’ are, and where they lie on the fragility and antif-ragility spectrum to arrive at a better understanding. This approach is critical as forces always put stress on the system that exceed those previously observed. This kind of mathematised thinking gives false confidence about the future based on past events.

The track record of these credit rating agencies hasn’t been great. From Enron to collateralised debt obligation to the Euro crisis, credit ratings agencies are haunted by many ghosts. Given the pro-cyclicality and time lag in their analysis, only in 25 per cent of the cases have two of the big three rating agencies cut their ratings before the correction.

Given the reactionary approach of these agencies, they tend to downgrade countries to compensate for their inability to account for it earlier and upgrade at the earliest sign of austerity. This was seen in the case of PIGS (Portugal, Italy, Greece and Spain). What they failed to take into account is the spill over of risk that is triggered in pursuit of conforming to an Anglo-American version of capitalism. Post the crisis, credit rating agencies have said to become “ultra-cautious”. This has been cited as one of the possible reasons for India’s rating being constant for the past 13 years despite significant progress on various fronts (also the same reason before the upgrade in 2007).

Apart from issues relating to methodology, the politics of credit rating are also conducted in a way that scales are tipped in the favour of certain developed countries. Some countries exercise excessive influence in the decision-making process of these ratings. In 2011, a president in one of the big three rating agencies stepped down after downgrading a developed country.

In light of the many flaws, the commitment to explore the setting up of a BRICS credit rating agency is very crucial. Setting up of such a rating agency to “bridge the gap in the global financial architecture”, as stated by Prime Minister Narendra Modi, is imperative to balance the unchecked power these rating agencies possess.

A rating agency built on tenets such as transparency and true understanding of local political economy and frameworks, developing countries can pitch their true story to investors based on these ratings. While this endeavour is not without challenges, it is the need of hour and decades to come.