What If the Marathas Had Won at Panipat? 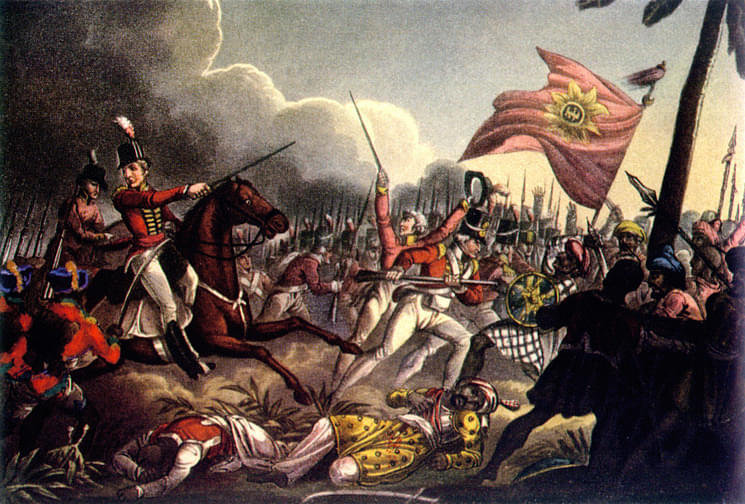 An alternative history featuring, among other worthies, several Maratha princes, Tipu Sultan, Maharaja Ranjit Singh, Mir Qasim of Bengal, the Nawab of Avadh, the Nizam of Hyderabad, and the future Duke of Wellington.

For nearly 250 years, Panipat has seen no conquests or victories, unless you count McDonalds. It’s the place on the way to the hills where you stop the car, so that the ladies can look for bathrooms. If you’re a gentleman, you help them find one. The city produces power, fuel and fertilizer, and you can smell it in the air.

Since October 2014, Panipat City has been represented in the Haryana state assembly by Ms. Rohita Rewri, whose Facebook page has 2,741 likes. She has been photographed with a broom. One of the posts on her page features a quote from Guru Nanak: Before becoming a Sikh, a Muslim, a Hindu, or a Christian, let’s become human first. Industry flourishes in Panipat, and a working man can hope to get paid a little more than elsewhere. Many come here looking for a living.

But for centuries, Panipat has served a different purpose. It was the last stop on the road to Delhi, and after Aurangzeb went to heaven, this road became a hotbed of activity. Ahmed Shah Abdali, the great Afghan chieftain, travelled to it regularly, because ATMs were yet to be invented, and he had littler chieftains of his own to pay off. He would drop in whenever funds were getting low. United by cash flow, the Afghans were enjoying one of their rare periods of unity, to the detriment of all their neighbours.

It is now 1761. The British have made some progress. They have talent for spotting traitors, and this has served them well at Plassey. They control the rich province of Bengal, from where they can see as far as Burma. On the other hand, Hyder Ali will soon be in charge of Mysore, and the Nizam can never be trusted. Madras is looking vulnerable. Bombay is surrounded by well-armed Marathas. The French are everywhere, hatching plots and putting garlic in everything.

The British presence is fragile. They are not yet confident enough to bring over their women. As a result, India is safe from the memsahibs, the most deadly invasion of all. Once they take charge, there is no looking back. In 1761, this point has not yet been reached.

The Maratha Confederacy is at its height. So is their squabbling. The leading chiefs all hate each other, and are united only in their resentment of the Peshwa, who is the medieval equivalent of an HR Manager. He handles bonuses and promotions, and he tells them where to improve, but he does not seem to be doing much work himself.

Peshwa Balaji Baji Rao has kept them busy invading other people. His plan has worked well. Their empire stretches from Bhubaneshwar to Baroda, and from Bijapur to Lahore. Here too, cash flows are good. Family fortunes are being made. A bandit with a flair for leadership could once dream of rising high amongst the Marathas. But now, bit by bit, these positions are becoming hereditary.

Much blood is being spilled in Punjab, as usual. Ahmed Shah Abdali rampages through it in 1756, and captures Delhi. He loots the place and leaves a token force. The Marathas rampage through it in 1757, after re-capturing Delhi, and drive off the Afghans.

By 1758, the Marathas reach Peshawar, where they defeat the Afghans again. They collect tribute from everyone, and satisfied with collections, return to the plains, leaving behind a token force. Ahmad Shah Abdali storms back in 1759, sweeping past the token force, and re-captures Delhi.

The mood is grim. Collections have been thin, as everyone in Delhi is largely penniless by now. Ahmad Shah allies with local leaders, including Shujauddaulah, Nawab of Avadh, and the Mughal Emperor, who by this time is being passed around like a rubber stamp.

Led by Sadashivrao Bhau, a Maratha army of 60,000 marches to Delhi. The march is slow, as they are accompanied by over 100,000 pilgrims, keen to see various pilgrimage centres in North India. They feel safer in the company of troops. The pilgrims do not stop to consider that these troops are about to fight one of the biggest battles of the 18th century. Their faith is strong, but their brains are weak.

The march to Delhi is delayed as the pilgrims stop at all the important pilgrimage centres on the way, giving Ahmad Shah Abdali enough time to organize his forces. Thanks to his alliances, he has nearly 100,000 men. After a series of skirmishes, the Maratha army, pilgrims and all, are trapped at Panipat, and besieged for two months, with their food and water running out. Due to the need to feed the pilgrims, their situation is desperate. The soldiers are weak and starving. They beg to die in battle, rather than hiding behind walls.

Sadashivrao Bhau leads his men out, against a superior foe. The force of their first charge is so great that the enemy is driven back. The Maratha infantry, supported by the Gardis, are cutting the Afghans to pieces. The Afghans and their allies begin to flee. Disobeying orders, the Maratha cavalry gives chase, scenting victory, and charges right into the Afghan artillery, which blows them up.

The Marathas fight bravely, but the tide is turning. Ahmad Shah throws in his reserve troops. The Marathas are hungry and exhausted. They have no reserves. Ahmad Shah sweeps the field. Out of a Maratha army of 60,000, only 17,000 make it back home. An entire generation of military talent is destroyed.

Ahmad Shah Abdali is unnerved by this battle. If he ever had any plans of hanging around, he shelves them. Instead, he keeps commuting, ending his career with a total of nine invasions. Punjab suffers the most. He massacres the Sikhs and desecrates the Golden Temple. His criminal spree is ended by his death, in 1769.

Meanwhile, by winning the Battle of Buxar, the British gain control of UP, Bihar, Bengal, Orissa and Assam. They crush the French and repulse the Dutch. They grow rich and powerful. When the time is right, they divide up the Maratha chiefs, and defeat them one by one. By 1818, they rule most of India. Soon after, the first memsahib steps ashore.

But supposing the Marathas had won?

Supposing Vinchurkar and Gaikwad had held back their cavalry till afternoon, and attacked when Ahmed Shah brought in his reserves? Supposing Peshwa had appointed Holkar or Narayan Rao as general, both of whom had begged Sadashivrao to make more allies, and knew North India much better than him? Supposing, at the height of the battle, Sadashivrao had stayed on his elephant, instead of getting off to fight on foot, leaving his soldiers unable to see him, and thinking their general was dead?

The Afghan line breaks. Ahmad Shah Abdali flees with the remnants of his army. On his way through Punjab, he is attacked by the Sikhs, and dies in the Battle of Lahore. The Marathas celebrate their great escape, and forever after, Sankranti is a time of great joy in Maharashtra.

The prestige of the Peshwa is at an all time high. A slightly confused Shah Alam II is put back on the Mughal throne, with Scindia as his local guardian. Riding high on victory, the Marathas crush the Nizam, and discover that he was not as poor as he pretended to be. They force Hyder Ali to become their vassal. Madras is now completely surrounded by the Marathas and their allies.

Meanwhile, in Bengal, the British realize that Mir Qasim, Nawab of Bengal, is not a very good puppet. He is building his own army, and grumbling about British greed. Mir Qasim decides to revolt, and asks Nawab Shujauddaulah of Awadh for help. Shujauddaulah, former supporter of Ahmad Shah Abdali, has quickly switched sides after Panipat. He’s nimble that way. He asks his overlord the Peshwa for advice.

Bengal was always the next step for Peshwa Balaji Baji Rao. He blesses the enterprise, and sends Scindia to support them. With the Maratha hand on their necks, there are no betrayals at Buxar. The British are pounded by Maratha artillery, and this time, the cavalry charges at the right time. Mir Qasim becomes Nawab of Bengal once more, and resumes paying tribute to the Marathas.

The Marathas want him to drive out the British, but he keeps them. They are useful for making money. Calcutta grows and flourishes. After the British lose America, many of the troops are transferred to Calcutta, along with units of the Royal Navy.

Balaji Baji Rao is succeeded by his son, Vishwas Rao, one of the heroes of Panipat. The Maratha Empire prospers, except that it is gradually becoming a confederacy, as Scindia, Holkar and other Maratha princes build their kingdoms. Rivalry is fierce. By early 19th century, each one of them is growing impatient.

The death of Vishwas Rao triggers a struggle for succession. Over in Madras, Arthur Wellesley, the man who will one day defeat Napoleon at Waterloo as the 1st Duke of Wellington, is getting bored. He had hoped to advance his career in India, but there’s been very little action. Now, at last, he hears rumours from Calcutta about a campaign against the Marathas. British forces in Madras will be supported by Tipu Sultan, son of Hyder Ali, who is itching for freedom from Maratha rule.

Meanwhile, across the Sutlej river, Maharaja Ranjit Singh is expanding his power. Punjab will be united soon, and much stronger than before. By 1802, he is master of Amritsar. When he looks across the border, he does not see the British Empire. He sees the quarrelling Marathas, and he hears a voice whispering in his ear.

To Delhi, it whispers. To Delhi.