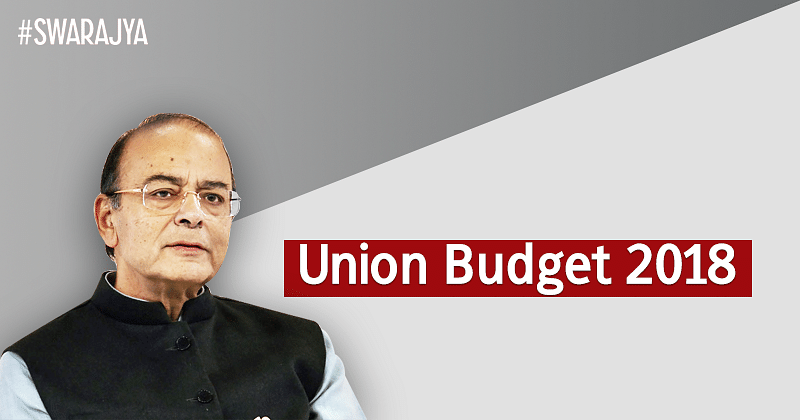 The Finance Minister has just closed the budget speech, markets are not responding very well to the announcement of long term capital gains tax on equity gains over Rs 1 lakh.

Long term capital gains tax of 10% on gains in equity over Rs 1 lakh not helping the share market sentiment.

For ease of doing business at a deeper level in all states of India, Government of India has identified 372 basic business reforms.

Each state will take up these reforms and simplification in a mission mode, constructively competing with each other. Evaluation of the performance under this programme will now be based on feed-back.

Corporate tax 25% for companies with turnover up to Rs 250 crore. This will benefit MSME firms, which will amount to 90% of the companies filing tax returns. Government to forego Rs 7,000 crore next fiscal.

Notes on the defence related announcements from the budget

- Govt to construct a new tunnel at Sela pass to promote tourism and improve connectivity for border defences. Will reduce road distance and travel time to the China border at Tawang. Sela pass was central to the 1962 war with China, had to be abandoned by retreating Indian forces. (Via Manu Pubby)

Number of initiatives being taken up to develop defence industry. Two defence industrial developmental corridors to come up. Will bring up a new policy for domestic production by public, private sector and MSMEs--

Not a lot of announcements on defence this year. Here is a short compilation#Budget2018 pic.twitter.com/i7I8cyJUPM

267 unmanned railway crossing will be eliminated in next two years. All railway stations and trains will be provided WiFi and CCTVs progressively. All railways stations with more than 25,000 footfall to have escalators.

12,000 wagons, 5160 coaches and 700 locomotives being procured. There is significant achievements of physical targets by Railways : Arun Jaitley

70 lakh formal jobs have been created this year. Government will contribute 12% of the wages as EPF in all sectors for the next three years.

Contributions from women employees will be brought down from 12% to 8%.

76% of MUDRA loans are disbursed to women applicants.

Jaitley announces a National Health Protection plan to cover 10 crore poor families. The coverage will be up to Rs 5 lakh a year per family.

The scheme can potentially cover 50 crore Indians. Game changer for 2019? The government will have to roll this out fully in the next 12 months for this to have any effect on 2019 polls.

The two flagship welfare schemes of the Modi government - Ujjwala and Saubhagya Yojanas that deal with gas and power connections, get early mentions.

The government raises Ujjwala target and wants to give free connections to 8 crore poor households. Note that this scheme helped the BJP electorally in rural constituencies of states like Uttar Pradesh.

The government is also targeting four crore electricity connections to the poor under Saubhagya Yojana.

The rural focus is showing. Arun Jaitley tackles rural issues first thing in his budget after the preliminary comments. Here are the early updates

MSP for farmers for the oncoming Kharif crop will be 1.5 times the price of the produce. Government wants farmers to earn 1.5 times the cost of produce

22,000 rural haats to be developed into Rural agricultural markets. Government to allocate Rs 2,200 for developments of these markets. Organic farming to be promoted through cluster-model approach to be adopted for agricultural production.

Some highlights from the preambles and early notes on the budget.

- We are allocating natural resources in a more transparent manner, there is a premium on honesty now: FM

Finance Minister Arun Jaitley has begun his budget speech. He begins by taking pot-shots at the corrupt, has mentioned GST and demonetisation. This is supposed to be a very short budget speech.

Good morning, dear reader! We will begin our budget day live coverage from 11 AM. Meanwhile, we have a quick guide to all the important terms used in the budget over here. There are 29 terms that you can make yourselves familiar with before the FM begins his speech.