Falsehoods & Fairy Tales: Whatever It Takes To Make A Saint Out Of Mother Teresa 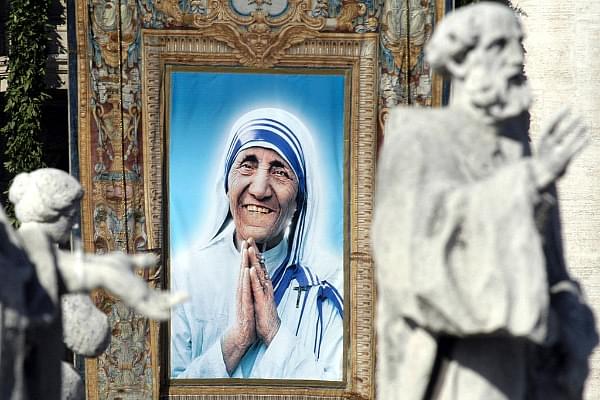 In early December 2008, 34-year-old Marcilio Haddad Andrino, a PhD in mechanical engineering from one of Brazil’s best institutes (University of Campinas) went on his honeymoon to Gramado, his wife’s hometown. There, he fell seriously ill and was driven 1111 kilometres, a journey that would have taken 14 hours at least, to a little-known hospital (St. Lucas Hospital) in Santos on 8 December.

According to a news report that appeared in Avvenire (an Italian newspaper that is affiliated to the Vatican) Andrino, of Lebanese origin, was diagnosed with hydrocephalus (abnormal accumulation of cerebrospinal fluid in the brain) and eight abscesses (tumours) in the brain, and had gone into a coma. But his wife left the hospital and drove for over an hour to São Vicente (where the couple used to reside) to pray at her Church – Our Lady of Aparecida Church.

The priest at the Church, Father Elmiran Ferreira, who very conveniently had a medallion bearing a portrait of Mother Teresa in his pocket, gave it to Andrino’s wife and asked her to take it back and keep it under her husband’s pillow at the hospital before returning to the Church to pray for her husband. The woman dutifully returned to Santos and did the priest’s bidding.

The next day, even as Andrino was being readied for surgery, his wife drove back to São Vicente to pray at her church along with Father Elmiran. A group of Missionaries of Charity nuns living at São Vicente also joined the lady and the priest to pray for Andrino’s recovery and ask for Mother Teresa’s intercession.

Meanwhile, Andrino, who was comatose, was wheeled into the operation theatre at 6.10 pm on 9 December. But doctors could not perform the tracheal intubation for anaesthesia. They, quite inexplicably, left Andrino in the operation theatre (OT) and, presumably, went to drink coffee! Half an hour later, they returned to the OT to retry the procedure and nearly jumped out of their skins when they saw the patient fully awake and without pain.

“What am I doing here?”, Andrino is said to have asked the doctors, who were possibly too dumbfounded to reply. The next (10 December) morning, when his wife went to the hospital, she was startled to see him sitting on his hospital bed sipping coffee.

A couple of days later, he was back home with all the excess cerebrospinal fluid and the eight tumours having mysteriously disappeared. Soon after, he landed a good job with the federal government and shifted to the country’s capital, Rio de Janeiro, with his wife, who has since borne him two children.

This fantastical story, with its plethora of loopholes, will form the basis of Mother Teresa’s canonisation a little over two weeks from now on 4 September. Thousands from India, including West Bengal Chief Minister Mamata Banerjee and External Affairs Minister Sushma Swaraj – who will lead the Indian delegation, will journey to the Vatican to attend the ceremony, where this “miracle” will be celebrated.

The detailed account of this “miracle cure” of Andrino – which appeared in Avvenire, the first to announce the date of Mother Teresa’s canonisation (conferring sainthood) – stretches one’s credulity and throws up many questions. Why would a seriously ill patient be taken to a nondescript hospital more than a thousand kilometres away when Porto Alegre, the city nearest to Gramado (where Andrino was on a honeymoon; and what sort of a person would go to his wife’s hometown on a honeymoon anyway?), a major city in Brazil, was just 125 kilometres (2.5-hour drive) away?

Porto Alegre has the Hospital de Clínicas, a renowned university hospital in Brazil that has 60 specialities, and gets patients from across Brazil. In a medical emergency, it would be natural for a patient to be taken to the nearest hospital, more so if that hospital is highly reputed, rather than being taken to a nondescript one more than a thousand kilometres away.

The whole account of a (presumably) newly-wed woman (since the two had gone on their honeymoon) rushing off to her local church leaving her critically ill and comatose husband in a hospital is quite implausible. That is not normal human behaviour.

But after having left her comatose husband in hospital and met her parish priest, this woman drives back to the hospital and places the medallion under her husband’s pillow. And then, even as her husband is being readied for surgery, she drives back to her church to pray! Which woman would ever do that? Did she drive back an hour to be able to pray with the Missionaries of Charity nuns so that the (outlandish) miracle could be attributed to Mother Teresa?

And even as her, and her priest’s and nuns’ prayers are answered almost instantly by the ‘Blessed Teresa of Kolkata’ (as Mother Teresa came to be known after her beatification in October 2003), the (distraught?) lady remains unaware of her husband’s miraculous recovery. This at a time when, less than eight years ago, Brazil had (according to this Wikipedia entry) 150.6 million mobile phone users.

Would not a woman whose husband was dying call up the hospital using a mobile phone (borrowing one if she doesn’t possess one) to know about her husband after his scheduled surgery? Would she wait till the next morning to physically visit the hospital to find out about her husband’s condition?

This story is also full of coincidences. Many outside the Santos diocese came to know of this miracle, but it was not reported to the Vatican. It was only eight years later, in 2013, that Pope Francis got to know about it during a visit to Rio. A neurosurgeon in Rio, Jose Augusto Nasser, was assigned as the Pope’s personal physician during the visit and told him at the time.

Nasser also happened to be the personal physician of Father Caetano Rizzi, who was the judicial vicar of Santos when this miracle occurred. Incidentally, there are no accounts of Father Caetano suffering from any neurological disorders that required surgical intervention. And a surgeon is not usually a personal physician of any person. But we are talking about fantastical stories here.

Father Caetano, like Andrino’s wife, also hails from Gramado and knew the lady’s family. Father Caetano had told Dr Nasser, a devout Catholic, about the miracle cure of Andrino. Nasser then narrated the account of this miracle to the Pope and sent a report on it to the Vatican as well.

Last year, Father Caetano was told by the Vatican that it was examining the miracle. In the next week, three representatives from Rome reached Brazil, heard testimonies of Father Elmiran and 14 others and returned to Rome. They prepared a 400-page report on the miracle.

A team of three senior priests and two doctors carried out more investigations to conclude that the miracle was “instant, perfect and complete, lasting and scientifically inexplicable”. One of these priests was Father Brian Kolodiejchuk, a member of the Missionaries of Charity Fathers, a religious community of priests founded by Mother Teresa. It would be in Father Brian’s interest to have Mother Teresa declared a saint.

Of the two doctors, one was Marcus Vinicius Serra, a neurosurgeon who had treated Andrino and had “witnessed the miracle”. The other was Monica Mazzurana Benetti, a surgeon, who is Father Caetano’s niece and close to him. Benetti also hails from Gramado, a town with a strong Catholic influence.

Father Caetano also oversaw the case for another miracle that happened in Santos and that led to Josephine Margaret Bakhita, a Sudanese-born former slave who worked in Italy as a nun, being declared a Saint in 2000 by the Vatican. The miracle attributed to Josephine occurred in Santos in 1992 when a local woman miraculously recovered from ulcers caused by diabetes and hypertension in her legs. Father Caetano played a pivotal role in having the cure of the woman being declared a miracle that propelled Josephine to sainthood.

Mother Teresa visited São Paulo soon after receiving the Nobel Peace Prize in 1979. Soon, her nuns arrived in São Paulo and Santos, where they have a good presence. They regularly visit the Our Lady of Aparecida Church in São Vicente that Andrino’s wife used to frequent. This church is a simple building painted in white with thin blue lines stencilling its doors and windows. The similarity with the blue-bordered white saris worn by the Missionaries of Charity nuns is uncanny.

Mother Teresa’s “Miracles” Pose No Problems For Left, But Ghar Wapsi Does