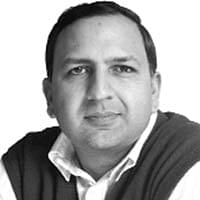 P.B. Mehta’s case in yesterday’s op-ed titled “Do not disagree” is that a bumbling, incompetent and intolerant state is unleashing its draconian powers now against NGOs in an attempt to stifle dissent. There is no doubt an element of truth in this. We have seen enough investigations, inquiries and anonymous insinuations against Team Anna, Devas Corporation, UPA-2’s political rivals and others to be cynical enough to admit that. Yet, it is worth asking how we got here and why the state is taking recourse to such deviant methods at all.

1. Anatol Lieven’s conclusions about the Pakistan government in his recent book “Pakistan: A hard country” hold true for India as well – the state is really operating from a position of weakness, not strength. One common method of a state to win over its opponents is by distributing patronage but as he points out, there simply isn’t enough of it to go around which is why governments find it so hard to retain their dominance for long – the best explanation in fact for what we term “anti-incumbency” in election after election. Expansion of government and revenue have not kept pace with population growth which, together with the phenomenal expansion of interest groups whose power and reach can rival that of the state, have only made the task of governance so much harder. The huge welfare schemes, byzantine laws and growing involvement in every sphere of life – all typical signs of the leviathan state – are attempts to overcome this infirmity by arming the state with the dual powers of pelf and coercion.

2. No doubt, the government can do a better job of educating the public by preparing press releases more diligently and by appointing spokespeople versatile in the subject. But it is naive of P.B. Mehta to think that lack of persuasive reasoning is the primary source of the problem here. It most assuredly is not. How many “civil society” led protests have we seen that were solved by governmental patience, assurances and explanation? Not Narmada…..or Posco or Vedanta or Singur or Jaitapur or Kudunkulam. The list can go on. Activists insist, with justification in some cases, that the state has not fulfilled the promises it made but would any government offer short of a complete rollback have satisfied protest groups in any of these instances to begin with (had other options not run out leaving them with little choice)? The answer, as far as I can see, is a clear no. Maximalist demands coupled with a refusal to compromise has been and remains the modusoperandi of NGOs.

3. Tolerance to dissent in any civilized society is proportional to the ability of the respective state to manage it, an issue which pertains directly to the strength of state institutions. Democracy, ultimately, is supposed to be the rule of the majority. It is perfectly fine for a minority to disagree but at some point, deliberations must reach definite outcomes so that matters move forward whichever way the majority sees fit. Obstinacy can well be a virtue at times but that does not mean those who continue to cling to their view can keep throwing roadblocks to the majority’s choices. Unfortunately, as Arun Shourie once said, in India, everyone has a veto. Those who disagree can protest peacefully but invariably these days, NGOs do more than vociferously oppose: they actively block sites where public works are being conducted, vandalize property, incite the public through the media, file PILs in court vide their supporters to stay or stop projects all of which, both individually and collectively, can halt or greatly slow down the effort. A populace that is innately mistrustful of the state render this problem doubly difficult. When small groups can put a spanner in the works at any stage in the process and cannot be dissuaded from doing so by recourse to the legitimate instruments of governance, it is but natural that those in authority will look to means outside the system to break the impasse.

4. The solution therefore is to permit dissenting speech but speech alone. How successfully the state accomplishes the task in the future will indirectly determine how much freedom we retain as a society. Since he refers to environmental impact assessments of public projects, I have a couple of suggestions:

(a) All political questions ought to be resolved exclusively in political fora overseen by neutral arbiters. In practice, that translates into at least two things: firstly, any place where the consent of local bodies is required, any meeting to make that decision should at least include an observer appointed by, say, a body such as the election commission so that its proceedings are properly recorded and its legitimacy cannot be questioned later on by any one. Secondly, the doors of the judiciary should be permanently shut to petitions challenging projects solely on grounds of their political desirability.

(b) If environmental laws are a problem, appropriate rules must be framed to ensure clarity, transparency, verifiability and enforceability. Establishment of the national green tribunal is a step forward. Mehta is right that trustworthy knowledge is essential and it is vital for government reports to be comprehensive and authentic. But if that is where the trouble lies, that ought to be where efforts are directed towards. Yet, we seldom hear of NGOs functioning as due diligence watchdogs or trying to advance the cause of bureaucratic reform; even if there are, they are surely not the ones the government has thought fit to target.

Other proposals can be made such as that concerned governments should all speak in one voice, etc. but they would depend on the political sentiment of the day. Ultimately, it is up to the people to decide how much sympathy they have for civil opposition, how long a rope project opponents must get and whether government handling in these matters is firm, legitimate and appropriate or harsh, illegitimate and oppressive. A public that expects governance with only a heart and no head will end up with few liberties as well.