The 2 ‘S’ Words Ambedkar Did Not Want in the Constitution 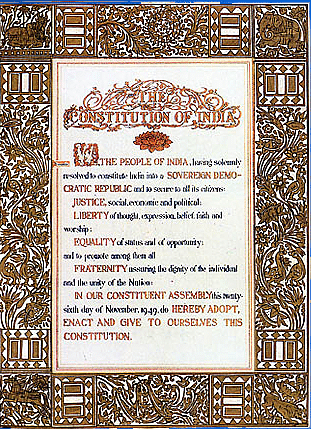 The Preamble to the Indian Constitution

The omission of the words “secular” and “socialist” from the Preamble of the Constitution in the advertisement issued by Information & Broadcasting (I&B) Ministry on the eve of India’s Republic Day on Monday has led to a furore. A section of the media is busy spinning it as a diabolical attempt to subvert constitution and attempting to manufacturing outrage over it.

Pro-Maoist activist Kavita Krishnan led the online lynch mob with her Tweet: “Pl sign petition. Shocking Govt ad on R-Day that cut ‘secular’ & ‘socialist’ from Preamble of Constitution of India (sic).” Congress leader Manish Tewari called it an “unforgivable sacrilege”. “Republic blunder” the Firstpost headline screamed and it added, “Modi govt ad omits ‘Socialist, Secular’ from Constitution preamble.” Then the article connected subliminally an artistic impression of the original draft of the Preamble with a malicious design: “The government would do well to issue a clarification, given that the last few months have seen continuous protests by the opposition as well as religious outfits after several Hindutva outfits including ruling BJP legislators have made controversial remarks against religious minorities, and a ‘ghar wapsi’ campaign, based on the premise that all citizens of India were originally Hindus has generated outrage across the country.”

Indeed, not only the Narendra Modi government, but also its critics of manufactured outrage would do well to dig a little into the history of these terms “secular” and “socialist”, and how they wormed their way into the Preamble of the Constitution where they were originally not present.

While the government advertisement would have used the original Preamble unintentionally, the omission of the words by the chief architect of the Constitution was intentional and well-founded. On 15 November 1948 at the Constituent Assembly debate in Parliament, a member, Prof K.T Shah from Bihar moved an Amendment to the original Preamble statement. He insisted that the words, “Secular, Federal, Socialist” be inserted into the statement. In a detailed reply, BR Ambedkar justified why he did not include the words “secular” and “socialist” in the Preamble:

Sir, I regret that I cannot accept the amendment of Prof. K. T. Shah. My objections, stated briefly are two. In the first place the Constitution, as I stated in my opening speech in support of the motion I made before the House, is merely a mechanism for the purpose of regulating the work of the various organs of the State. It is not a mechanism where by particular members or particular parties are installed in office. What should be the policy of the State, how the Society should be organised in its social and economic side are matters which must be decided by the people themselves according to time and circumstances. It cannot be laid down in the Constitution itself, because that is destroying democracy altogether. If you state in the Constitution that the social organisation of the State shall take a particular form, you are, in my judgment, taking away the liberty of the people to decide what should be the social organisation in which they wish to live. It is perfectly possible today, for the majority people to hold that the socialist organisation of society is better than the capitalist organisation of society. But it would be perfectly possible for thinking people to devise some other form of social organisation which might be better than the socialist organisation of today or of tomorrow. I do not see therefore why the Constitution should tie down the people to live in a particular form and not leave it to the people themselves to decide it for themselves. This is one reason why the amendment should be opposed.

Then Ambedkar remarked, “The second reason is that the amendment is purely superfluous.”

However, in 1976 during that darkest hour of Indian democracy — the Emergency — when India was spiraling down into an abyss of Fascism under a socialist Congress’s rule, the 42nd Amendment was made, which slipped “secular” and “socialist” into the Preamble. In other words, it was the addition of the words, the very words explicitly rejected by the main architect of the Constitution, which was sacrilegious; it was certainly against the spirit and sanctity of the Constitution. If anything, we need to undo this attack on the original draft of the Constitution and restore the original draft of Ambedkar. That would take into account the freedom of generations to come as well as the future of evolution of our social institutions, not caring for the frivolous fashion statements of political rhetoric shorn of substance.