The Great Loot of Andhra Pradesh 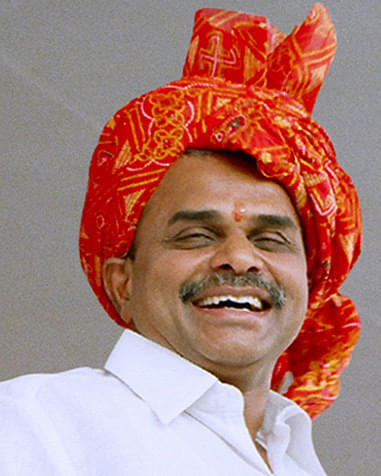 Let’s briefly look into the math of the above headline before proceeding further to explain the growth of the YS empire. Raghuram Cements was bought over by a new company called Bharathi Cements. Bharathi is the name of Jagan Mohan Reddy’s wife. The YS family gets about 4.5 crore shares alloted to them at Rs.10/- per share. Companies like India Cements, Dalmiya Cements suddenly bought premium shares for much higher amounts and invest about Rs.250 crores for a 31% share! The YS family owns 69% of the company with an investment of Rs. 45 crores. Others invested about Rs.250 crores with 31% share, into a company that hasn’t even begun manufacturing! The article later goes on to explain how this 69% share holding rose in its value to about Rs. 3000/- crores in just 3 1/2 years.

The detailed math and financial transactions are way too complicated for my understanding. The route used by the companies of YS family is so circutous, it makes your mind go into a tizzy. Simple example. The company that invested 69% into Bharati Cements is Jagati Publications. Jagati Publications (named by combining Jagan’s name and his wife Bharati’s name) owns Sakshi newspaper. Shares were alloted to YS family in this company too, for Rs. 10/- !! Deloitte values this company for Rs.3,500 crore, and therefore the value of YS family shares jumps to thousands of crores!

Let’s leave all the math jargon aside. Let’s assume that all this is propaganda by the opposition and a media that is against the Congress. Let’s just go by facts present in the public domain (the charts presented below have been picked up from TDP’s website, who in turn have picked it up from documents available in public domain).

Almost every company mentioned above received some largesse or the other from the government (both the centre and the state were ruled by the Congress during this time). Each of these investors have recieved some largesse (in terms of land, investments, loans, rules etc). Now, are you wondering how come no media highlighted this? Take a look at the snapshot below.

The above snapshot is a small collection of headlines from the popular telugu daily, eenadu. Eenadu, along with another newspaper Andhra Jyothy, has revealed many such corruption sagas by the YS family and the other members of the Congress government. Slowly, a momentum was built saying both these newspapers were partisan; never exposed corruption in TDP regime etc
When TDP and other opposition parties discussed the share holding details in animated debates in the Assembly – guess what YSR and his stooges replied? They asked Chandrababu Naidu why he was jealous if other companies were making money! The ruling party rubbished pretty much every allegation. YSR even appointed some judicial commissions with retired Judges heading them – ofcourse we know the result (almost none of them submitted any report)! Not satisfied with that, they went on to open a newspaper and a TV channel to counter the “opposition” propaganda!

Sakshi newspaper and TV had two goals in mind – glorify YSR and demonise Chandrababu/Eenadu. If eenadu stories had details about corruption by YS and family, Sakshi would immediately resort to stories of “corruption” by eenadu etc. As if corruption by one group justified corruption by the other! And now suddenly the debate in the state turned to the “media war”. The debate was never about corruption anymore – just about how cunning these media people are blah blah.

Even by now, if you are not convinced that public money and power were not misused, here’s a minor fact revealed by CAG. Governments are not supposed to place ads in new newspapers, unless they publish continously for six months. Guess for which newspaper this rule was broken?? Full page ads in Sakshi newspaper right from day one! That’s your money down the drain there! Sakshi paper was established for government propaganda and on top of that – full page ads!

The above mentioned details are just of THE empire. We have not even discussed the mammoth corruption in various government schemes and programs, that went on unhindered. Jalayagnam, the pet project of YSR involves construction of “30 major and 18 medium irrigation projects at a cost of Rs. 46,000 crores to provides irrigation to an extent of 73 lakh acres “. From the official website (which incidentally still has a picture of YSR and not the current CM!), “Eight of these projects were to be completed before the kharif season of 2006“. Till now, only 12 projects have been completed. Project costs were escalated, tender process was rigged – what not! Even Sonia Gandhi was forced to order an internal probe into this! It was even labelled as “Dhanayagnam” by the opposition! No news about that. Scams unearthed ranged from industries (which involved the current PCC Chief)to education department, and yet not a squeal from the “national” media.

I am sure you people must have heard about “Reddy Brothers” from Karnataka. I am sure you would have assumed by now, given the awesome coverage that they are the epitome of corruption in this country. You must have also heard that through their Obulapuram mining company, the Reddy brothers have manufactured an unprecedent loot of natural resources of this country. Quiz Question – in which state in Obulapuram located? Andhra Pradesh!

This same Obulapuram Mining company also owns “Brahmani Steels” which – hold your breath – reportedly made profits even before it started manufacturing any steel! 10,000 acres of land was alloted to it in Kadapa (Andhra Pradesh) after a cabinet decision by the Congress government in AP in 2007.

We were also told that the plant will start manufacturing within 18 months (without any bank loan!) and will beat Vizag Steel Plant in no time (according to latest TOI report, the plant is nowhere close to manufacturing!). Amidst lot of criticism, a successful foundation laying ceremony was also held. I very vividly remember, YSR playing a Quiz master here and asking the Reddy brothers all the questions that the opposition was asking, and the Reddy brothers “refuted” them point by point. And therefore, amidst public, it was decided that this steel project is the awesomest idea ever.

The USP is always the same. Allot shares for yourself at the cheapest price possible. Lure investors to buy shares at a more higher price. Give these investors largesse in terms of land, concessions etc etc. And get away with all the loot.

What has been mentioned in this blog so far is not comprehensive – only because the loot is so large, it is impossible to cover everything in one go! A mining lease was issued to YSR’s son-in-law Brother Anil Kumar, which was later cancelled by the centre, very conveniently in 2010. I am sure if we start digging into Brother Anil Kumar’s business details.

Please remember, all this loot happened when Jagan was a member of Congress party and his father YSR was heading the Congress government in Andhra Pradesh. Please also remember that YSR was one of the favorite Chief Ministers of the high command led by Sonia Gandhi.

The reason I am mentioning the Congress party so many times is because there has been a concentrated campaign to try to convince people that this loot by the Congress party led by the father-son duo had nothing to do with the Congress party itself! And now, after Jagan Mohan Reddy has resigned from Congress, many leaders from Congress are openly accusing him of misusing power. Many are openly calling him as very corrupt. And when pointed out that all this corruption took place under the guidance of YSR, they went on to say, Jagan misused his father’s powers!!

The Andhra Pradesh High Court directed the CBI to investigate these cases. Minor fact that media won’t tell you – this case was filed by a Congress minister, Sankar Rao! (a second case was filed by TDP leader, Yerran Naidu). So now, the corruption accusations are no more a opposition and media conspiracy. Have you ever seen a near unanimity amongst all major political parties on such a contentious issue? Leaders of the same Congress party who enjoyed the spoils of power under YSR are saying there was massive corruption; PRP, the party whose main plank was to take on this corruption merged with the Congress because YS family is not in power anymore; TDP, Left, and BJP (the state unit) have been crying hoarse from a long time too!

The regional media, has been shouting from the rooftop of the loot being done in the name of business acumen.

From about 6-7 years, they have been very vociferous of the corruption and robbery the YS family has been resorting. This “national” media was no where to be seen or heard. There was one obscure “Devil’s advocate” interview by Karan Thapar in which YSR had only one answer – Go the court if you think it is wrong! Other than that, no “exclusives”. No stories of the phenomenal growth of THE empire. Atleast, if they thought this was a media war – no story about that either!

The closest any newspaper came was this article in livemint. Just that article is enough to confuse us with the machinations used.

Anyways, Jagan owns two palaces. One in Hyderabad. It is a 74 room palace! The second is in Bangalore. Take a look below

Hyderabad palace:
And what did B.S.Yedyyurappa do? Alloted some government land under CM’s discretionary quota to his family members.

I rest my case.

PS: I would welcome any fact based rebuttal. Please resist from labeling this article as Anti-jagan, anti-congress blah blah. We have crossed that line long back!