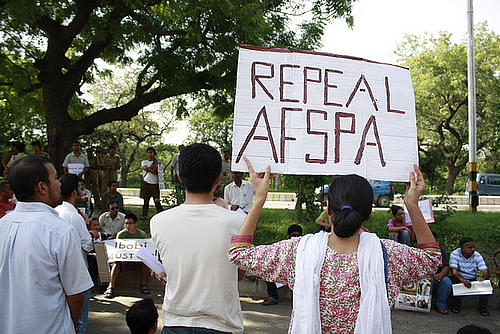 An activist protests against AFSPA.

The tragic incident in Nagaland’s Mon district last weekend has revived demands for the repeal or lifting of the Armed Forces Special Powers Act (AFSPA). This demand will surely intensify in the days to come.

But the demand holds no basis and is either ill-informed or ill-motivated. Because there is no way the army can, or will, carry out internal security (IS) duties without the shield of the AFSPA.

Those demanding the withdrawal of the AFSPA from the ‘disturbed’ areas of Northeast must realise this. No AFSPA means no army. Are they prepared to live with the consequences of the army being withdrawn from IS duties, including counter-insurgency (CI) operations, in their states?

It is important here to understand why the AFSPA is essential for the army to be engaged in IS duties, and also the circumstances that dictate the deployment of the army for such duties.

What The AFSPA Is All About:

The AFSPA that was promulgated on 22 May 1958, confers some special powers on members of the armed forces who are deployed to carry out CI operations or IS duties in areas declared ‘disturbed’ (that is, areas affected by militancy).

The AFSPA empowers “any commissioned officer, warrant officer, non-commissioned officer or any other person of equivalent rank in the armed forces” operating in ‘disturbed areas’ to use force and open fire to even cause death to any person ‘acting in contravention of any law’. Such a member of the armed forces can destroy any structure from which attacks can be launched on security forces or used as a hideout or training camp by insurgents.

He can arrest without warrant ‘any person who has committed a cognizable offence’ or who is suspected to be planning to commit such an offence. He can also enter and search without warrant any premises.

The AFSPA provides that “no prosecution, suit or other legal proceedings shall be instituted, except with the previous sanction of the Central Government, against any person in respect of anything done or purported to be done in exercise of the powers conferred by the Act”.

The AFSPA is in force in Nagaland, Assam, Manipur (except the areas under Imphal municipality) and three Naga militancy-affected districts (Changlang, Longding and Tirap) of Arunachal Pradesh.

A similar legislation — Armed Forces (Jammu & Kashmir) Special Powers Act, 1990 — has been in force in the Union Territory of Jammu and Kashmir since 1992.

AFSPA was also imposed in Punjab in 1983 to battle the Khalistani separatists that time and remained in force in the state and stayed in force there for 14 years.

It is the power to use force, open fire and even kill people ‘suspected’ to be breaking the law, and the immunity from prosecution by civilian authorities, that AFSPA opponents have been protesting. This power to use force and the immunity from prosecution is often erroneously described by human rights activists, media and others as a ‘licence to kill’ when it is actually far from so.

It is true that excesses have often been Northeast and they have marred the fair name of the security forces. But in every such case, the army has conducted its own inquiry and, what is not known to the public, handed out severe punishment to the guilty.

Any incident, even minor ones that have resulted in loss of lives or injuries or destruction of property or bodily harm to civilians are scrupulously probed by a court of inquiry (COI) set up by the army. And any transgressions by any member of the armed forces invite stern action.

The army contends, and rightly so, that its internal process of meting out punishments for transgressions are much swifter than civil courts where cases drag on for years, if not decades. And the armed forces’ track record of prosecuting its own who cross the line is much better than that of civil courts.

Why The AFSPA Shield Is Necessary

Army officers and men are not trained for IS duties and to battle internal ‘adversaries’.

Hence, it is unfair to expect an army officer or soldier to unlearn, or junk, his combat training and adapt to operating in civilian areas to face militants or insurgents who are fellow-countrymen.

And then, after being deployed for IS or CI duties for a tenure of two to three years, get posted once again to the international borders to face enemy Pakistani or Chinese soldiers where his earlier ‘shoot to kill’ combat training and protocol kicks in once again.

It is humanly impossible to undergo such rapid and frequent transformations, and despite best efforts and intentions, ‘mistakes’ are inevitable. Such ‘mistakes’ are the inescapable cost of using the army for internal security duties.

This is not to condone such mistakes and not to say that all mistakes are accidental. As said earlier, army men have often been found guilty of committing excesses. But if the shield offered by the AFSPA — the immunity from prosecution by civilian authorities — is withdrawn, then army officers and soldiers engaged in IS would have to bear the terrible burden of battling numerous cases in courts in the ‘disturbed’ areas of the Northeast. That would severely compromise their, and the army’s, operational efficiency.

To explain this more clearly, let us take the example of last weekend’s incident in Nagaland. A first information report (FIR) has been lodged by the local police charging the 21st Special Forces (SF) team that was responsible for the botched ambush with murder and firing on civilians without any provocation and without prior warning with intent to kill.

Without the immunity provided by the AFSPA, the highly-trained officers and men of the elite SF would have to subject themselves to interrogation by the Nagaland police, maybe even get arrested and spend time in the police lockup or in judicial custody. Imagine the effect of this on the morale of not only that particular unit, but the entire Indian Army.

And even after they get bail, they will have to engage lawyers, appear periodically before the courts and get bogged down in the entire process. The cases will drag on for decades and cause enormous and completely avoidable mental agony, besides being a huge drain on the modest earnings, of army officers and men.

All this — the long process of police investigations, preparation of chargesheets and the interminable court proceedings — will not only affect the morale of the army officers and men named in the police FIR, but will severely compromise the efficiency, preparedness and morale of the entire army.

Also, army officers and men are deployed in the ‘disturbed areas’ for IS and CI tasks for short periods and then posted to other areas in the country. They will then have to travel to the states where FIRs have been lodged against them very often to join the police investigations and fight the cases in civilian courts.

That would impose severe and debilitating constraints on their effectiveness. Imagine a scenario where SF officers and men travel frequently to Nagaland and appear before the police and courts there when they are urgently required to carry out operations against adversaries along international borders.

Withdrawing the AFSPA ‘shield’ would also open the floodgates to a deluge of cases, many of them frivolous and false, against the armed forces operating in the ‘disturbed areas’. Many NGOs which work as ‘overground fronts’ of insurgent outfits in states like Manipur and Nagaland will have a field day embroiling army officers and men in false cases.

The shield provided by the AFSPA — immunity to prosecution by civilian authorities — is thus an absolute prerequisite for the armed forces to operate in ‘disturbed areas’.

What Can Be Done

A few committees and bodies had, in the past, recommended the repeal of the AFSPA:

1. Justice B P Jeevan Reddy committee set up by the Union government in 2004 to review AFSPA. In 2005, this committee recommended that AFSPA be repealed, highlighting that the act has become “a symbol of hate and an instrument of discrimination and high handedness”.

This committee, in its report, said that while it is “highly desirable and advisable to repeal AFSPA”, the “overwhelming desire of an overwhelming majority of the region that the Army should remain” should not be lost sight of. The committee also suggested amending the Unlawful Activities (Prevention) Act (the UAPA) to provide for extra powers for armed forces operating in the North East.

2. Two years later in 2007, the second administrative reforms commission recommended that the AFSPA be repealed. The commission stated that “Repeal of AFPSA would remove the feeling of discrimination and alienation among the people of the northeastern states”. It also recommended insertion of appropriate provisions in the UAPA.

3. In 2013, the Justice J S Verma Committee, constituted to recommend amendments to criminal law, also recommended that the continuance of AFSPA in conflict areas needs to be revisited in order to extend legal protection to women.

But none of them, unfortunately, went into the practicality of deploying the army for IS duties without a legal protective shield.

This shield is, as stated above, absolutely necessary. At the same time, it is important to assuage the anger and hurt sentiments of the people of the region who are opposed to AFSPA and to whom the act has become a symbol of ‘state oppression’.

A via media has to be found. Maybe the AFSPA can be repackaged into a fresh act that contains the necessary protective shield for the armed forces, but with more checks and balances to avoid repeats of last weekend’s tragic incidents in Nagaland.

A new act can also make it mandatory for military tribunals that try alleged transgressions to complete trials within specific time frames and in a transparent manner. That would erase the widespread public impression that officers and men of the armed forces go scot-free after committing excesses.

It must also be noted here that the army is deployed to fight militancy or insurgency only because the police forces of the states have miserably failed to perform that task. Insurgency itself is the consequence of poor governance and abject failure of the local political leadership and civil and police administration to deliver.

The army cannot be expected to carry out the thankless task of cleaning up a mess created by corrupt and compromised politicians, bureaucrats and police, and then face prosecution for carrying out such tasks.

The army, which is trained to deal with an external enemy, would prefer any day to carry out its mandate and guard the country against external enemies. The army would rather stay away from fighting internal adversaries (militants and insurgents); the armed forces do not at all relish being deployed for IS duties and would rather face external adversaries along the international borders or undergo their periodic training to keep themselves combat-ready. Deployment for IS duties compromises their training time.

These are very important aspects all those who are clamouring for repeal of the AFSPA should keep in mind.