A Mysterious Gift: The Story of A Pala Era Buddha Sculpture 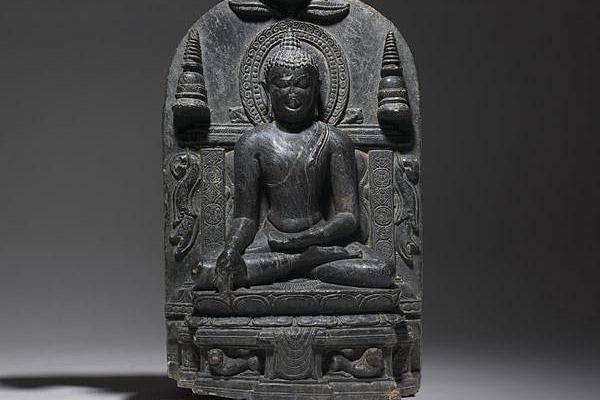 (Buddha sculpture at the NGA, Australia)

This amazing sculpture of Buddha, the one that you see above, calling the earth to witness (His right hand is in the Bhumisparsa Mudra) belongs to the Bengal Pala dynasty period. The problem is that this sculpture is currently with the National Gallery of Australia, Canberra

The online provenance record rather mischievously says the sculpture came from Bengal, India or Bangladesh. It further says that the sculpture was “Presented by the High Commissioner for India, Government of India, 1969”. Now, is that true and are there records to show this?

The extended text in the provenance record further adds, “The sculpture was selected by the Prime Minister of India, Indira Gandhi, and brought to Australia by her on a state visit in May 1968. It was presented by the High Commissioner for India in 1969 as a goodwill gesture, acknowledging Australia’s commitment to representing the high cultural achievements of India.”

However, a careful reading of Australia’s own Independent Review by Justice Crenan (released in 2015) only says “...the provenance of this object has been assessed as ‘highly unlikely to be problematic. The object was given to the National Gallery of Australia (NGA) in 1969 by the Indian Government.”

The object, as described above, was apparently selected by the then Prime Minister, Indira Gandhi, and was presented by the High Commissioner for India in Australia to the Interim Council of the NGA. One of the functions of the NGA advertised in that context was ‘to collect works of art representing the high cultural achievement of Australia’s neighbours in Asia'.

Now the said Prime Ministerial visit of Indira Gandhi to Australia was in May 1968 as can be seen from the public records. And except for her request to take home a Koala bear (which was turned down) there was no mention of the gifting of this Buddha sculpture.

This begs the question as to why she brought with her a Buddha sculpture on a rushed state visit (she visited Malaysia, Singapore, New Zealand before Australia on that trip). And why did the High Commissioner wait for a year before giving it to Australian authorities?

It is now amply clear that there is no paperwork with the NGA for this gift - so where does the part about “as a goodwill gesture, acknowledging Australia’s commitment to representing the high cultural achievements of India” come from ?

Questions arise as to how national antiquities could be taken out of the country (albeit even by the then Prime Minister). And how come the Externals Affairs Ministry or the Ministry of Culture cannot check and confirm any of this despite this report being in public domain for the past five years? Mysterious indeed.