Ananthamangalam To London And Back: How The Stolen Bronze Idols Of Rama, Sita And Lakshman Were Brought Back To Where They Belong 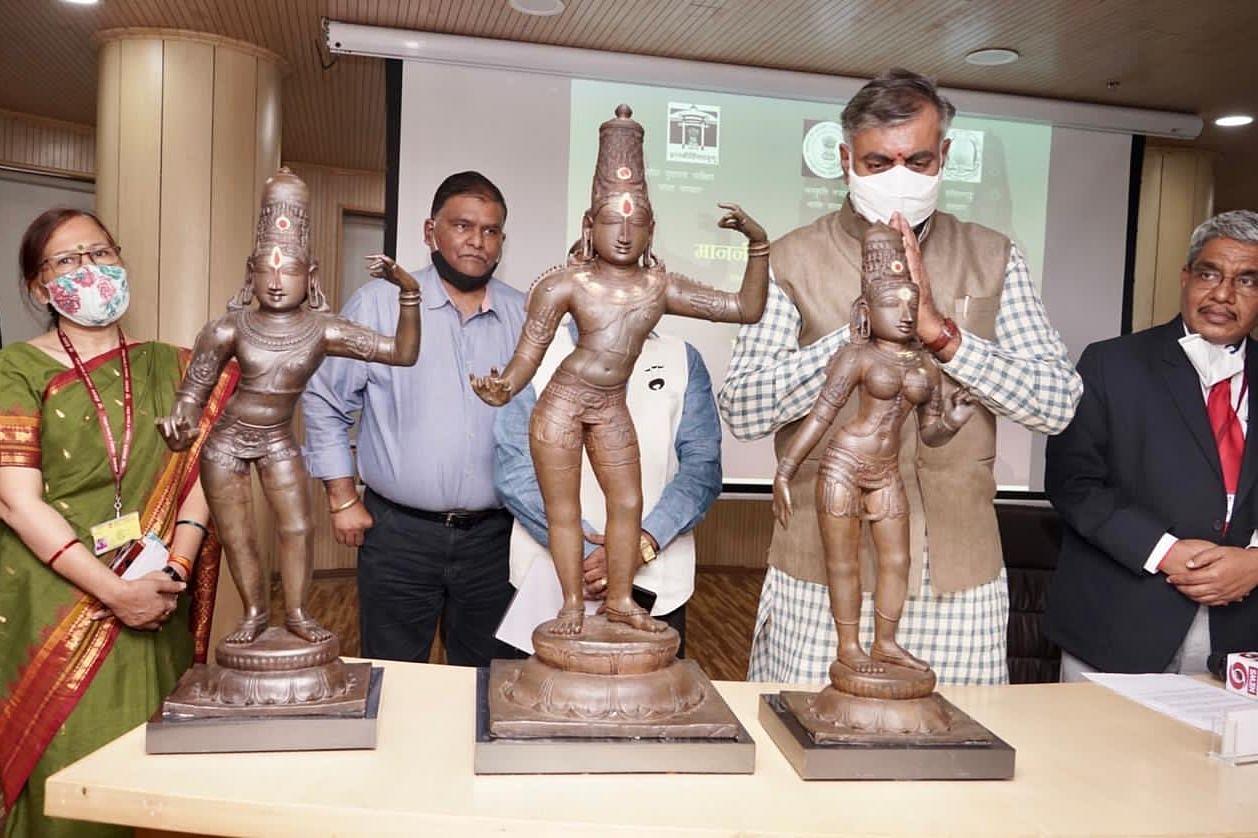 With the Union Culture Minister Prahlad Singh Patel today (19 November) handing over the bronze idols of Lord Rama, Lakshman and Sita to the Idol Wing of Tamil Nadu Police, it can be said that efforts of organisations that are fighting to bring back sacred idols to where they belong, is bearing fruit.

At the forefront of such an initiative is the India Pride Project (IPP) whose founder S Vijaya Kumar described the battle to recover these idols.

Vijay Kumar is a senior official in a Singapore-based shipping corporation, and has a passion for traditional arts and sculptures belonging to the Tamils. The non-governmental organisation (NGO) that he runs, India Pride Project (IPP), has been working for the last 14 years to bring back to our soil the sacred idols that were smuggled out of the country.

Just as Sri Rama and Sita returned to Ayodhya at the end of their 14-year exile on the sacred day of Deepavali, this year’s festival of lights saw them return in the form of sacred idols to Ananthamangalam.

Vijay Kumar tells us how IPP helped in getting back these sacred thirumenis years after they were smuggled out — when even the police and people of the village almost forgot about the lost idols.

It was in 1978. In the Ananthamangalam village of Nagapattinam district, the sacred idols of Sri Rama, Sita, Lakshman and Hanuman were stolen from the Sri Rajagopala Swamy Temple. The idols were made of five metals (panchaloha). The police arrested three people, but made no headway in the recovery of the idols.

Vijay Kumar said that the IPP collects the catalogues of all the ancient artifacts dealers and sellers. Similarly, it also collects the details of transactions of any foreign museum that purchases an Indian artifact.

In 2016, IPP discovered a traditional five-metal idol in the catalogue of a famous London-based artifacts dealer, says Vijay Kumar.

During foreign invasions, sacred idols were buried in village ponds or hidden underground, and forgotten about, only to surface during archaeological excavations.

However, these stolen idols didn’t look as if they were recovered from underground as they would have changed colour due to moss and weathering. The ones that are worshipped for long would have a shine, a lustre to it. These idols appeared to have been worshipped for centuries, before they were stolen.

However, these idols didn’t look like as if they were recovered from underground as they would have changed colour due to moss and other weather conditions. The ones that are worshipped for long would have a shine, a lustre to it. These idols appeared to have been worshipped for centuries, before they were stolen.

The next step was to search for the missing Rama idol in Tamil Nadu.

“In 2018, a member of our team got hold of another photograph of yet another artifact from the same dealer. Thus, we confirmed that this particular dealer was in possession of these two idols,” he says.

Vijay Kumar says the IPP then approached French Institute of Pondicherry (FIP) and browsed through their photo gallery. They have photo-documented and archived 10 per cent of Tamil Nadu temples in 1950s and 1960s. It contains lakhs of photographs of thousands of sacred idols. “These photo archives have played a crucial role in retrieving the smuggled out treasures,” says Vijaya Kumar.

“Photo evidence is quite vital in these cases.”

It is the photo archive evidence of FIP that played a major role in the recovery of 900-year-old Sri Puranthan Nataraja, Uma Devi from Ariyalur district of Udayarpalayam and Vruthachalam Arthanareeshwar, which were smuggled out to the US and then sold in Australia.

Last year, Vijay Kumar discovered that there was a sacred idol of Thirumangai Azhwar at London Oxford Ashmolean Museum.

“When we enquired at Hindu Charities and Endowment Board (a government body controlling the management of temples in Tamil Nadu) we were told that an identical Thirumangai Azhwar idol was present in the Sundara Perumal temple. Soon after this, we ascertained that the original had been stolen and replaced with a duplicate,” says Vijay Kumar.

“Again, it was the FIP photo archive that furnished the evidence.”

On the same lines, we submitted evidence about the Ananthamangalam idols being in the possession of a London dealer to Rahul Nangare, First Secretary at Indian High Commission in London. With the help of the metropolitan police he met the said dealer and submitted the evidence, Vijay Kumar says.

“When we speak of bronze idols we always think of the Chola bronze as the best specimen of the class. Ananthamangalam Sri Rama has an equal charm and beauty and they belong to Viajayanagara period”.

He said that the dealer confessed to buying the idols and confirmed that they were in his possession. He also agreed to return them. The idol of Hanuman too would be recovered soon. When the sacred idols were brought to the Indian High Commission in London, they were dressed in traditional attire, and pujas were performed for them.

Vijay Kumar says if we go through the sacred idols of our temples with the help of the photo archives of FIB in a scientific manner, we can locate the missing idols and also establish if the originals have been replaced by duplicate ones.

“Without any identification or even proof, there are 35 sacred idols in the United States alone. Countries like Cambodia, Egypt and Italy are recovering their lost artifacts through legal battles fought in the courts. We too can take similar steps,” he says.

Towards this end, every sacred idol of every temple has to be documented. Everyone in Tamil Nadu must come forward to join in this fight to recover the treasures we lost due to our negligence. They can send an email to vj.episteme@gmail.comall describing the details about the idols lost/stolen in their village/town temples along with the copy of the first information report (FIR).

Vijaya Kumar wishes to transform the idol recovery efforts into a people’s movement.

Also Read: India Pride Project’s Vijay Kumar Tells Us Topsy-Turvy Tale Of The Return Of Nataraja From Australia
US Returns 10 Smuggled Artefacts To India; Here Are Six Reasons Why This Is Significant
Our Gods Are Coming Home: Tenth Century Baroli Natesa Icon Stolen From A Rajasthan Temple Returned To India After Two Decades