Beyond The Binaries: Understanding The Veneration Of Ravana 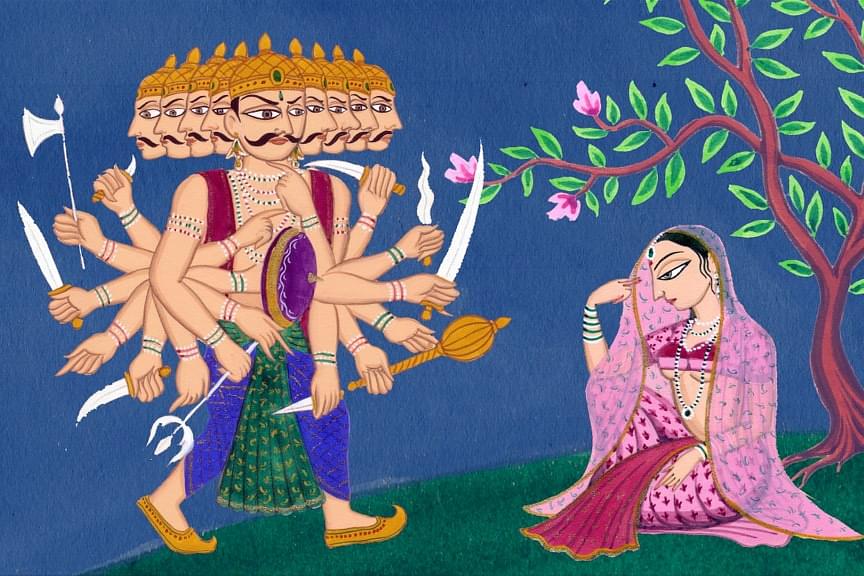 When Dravidian racists, and now the sponsored-subaltern scholars, discovered Ravana and reinvented him as the hero of the native-Dravidian resistance, they were unaware that the so-called orthodox Hindu tradition already had strong veneration of the King of Lanka entrenched in it.

However, unlike the culturally illiterate Dravidians and JNU-variety scholars, the Hindu veneration of Ravan that goes centuries back, does not rest on invented binaries.

For every traditional Siva devotee, Ravana has to be offered the fruits of a Siva puja at the end of every worship of the lord. The mantra listing the great devotees of Siva gives Ravana precedence over even Nandi, the vehicle of the lord and originator of traditional Saivite guru lineages.

Indic narratives show a specific Ravana - highly talented in many fields including medicine and music, yet arrogant, and though repeatedly humbled, laden with expansionist ambitions. He considered himself superior to other humans, and hence got himself the boon that if slayed, he should be slayed by a lowly human being. That was because he was confident that no human could ever slay him. His approach towards women too was fallacious. While many women fell for his charms, he took the consent of women for granted. Uttara Kanda gives an account of the curse he is supposed to have incurred from the celestial nymph Rambha. He could not touch any woman, nymph or wife without her consent. Hence he used the method of isolation, indoctrination and psychological torture to brainwash Sita into submission. Clearly, it is not just the physical violation of women, but forceful deprivation of their freedom too that can bring destruction upon the perpetrator.

Nevertheless, if one insists on reading the Ramayana through a modern lens, then the epic can also take a really troublesome narrative form - particularly for the rabid anti-Hindu left.

Nadars in Tamil Nadu claim their ancestry is linked to the solar clan, and hence consider themselves related to Rama. That makes Rama a member of the Other Backward Classes (OBC). Devendrakula Vellalas, a Scheduled Community (SC) today, have their community leader first plough the land - a tradition which was followed by Janaka. And that would technically make Sita a member of the SC. Forest dwelling communities who supported Rama come under the Scheduled Tribes (ST). So here we have the epic of an OBC leader, who in order to rescue an SC woman from the clutches of Ravana, a Brahmin, mobilises members of the ST. There is no need to say that for anyone familiar with Ramayana this description would be ridiculously hilarious. But then, no less ridiculous is the way today's leftists and their allies apply pseudo-scientific racial identities to the Ramayana.

Ancient Sangham literature as well as the Tamil epic Silapathikaram depict Ravana as a demon and hail Rama for his destruction. Illango Adigal, the author of the epic who was supposedly a Jain, states that vain are the ears, which have not heard the glory of Rama, who destroyed the might of Ravana's Lanka. Interestingly, Thiru Gnana Sambandar, the seventh century child prodigy and saivite monk, popularised the memory of Ravana as a great saivite whose body was covered with holy ash.

Tamil tradition also holds that Ravana, who was a great musician emperor, was defeated in a music competition by Agastya, the midget seer, and the legendary father of Tamil grammar. He thus reined in the expansionist ambitions of Ravana. He was also humbled by Vali, the brother of Sugreeva. In Tamil Nadu, almost all Siva temples depict the scene of Ravana lifting Mount Kailash. He is often portrayed as playing the veena to placate Siva after being crushed under the weight of Kailash, which Siva pressed with his toe.

So, through all these images and narrations, Ravana emerges as a magnificent human being who negated his own humanity and belittled fellow humans through his own greatness - almost a prototype of the Nietzschean superman - and hence inevitable was his fall.

So his greatness is venerated and his fall is celebrated. For Hindus, the veneration of his greatness and the celebration of his fall are complementary rather than contradictory. Ravana is too great a person to be defended by Dravidian racists and their comrades in arms – the culturally illiterate leftists. He can be venerated and appreciated fully only by a Hindu. His greatness and the immensity of his fall can be realised in full only within the Indic narrative. Hence it is high time that our culturally-challenged Dravidian racists and leftists stop belittling Ravana, reducing him to an outdated pseudo-scientific racial icon.