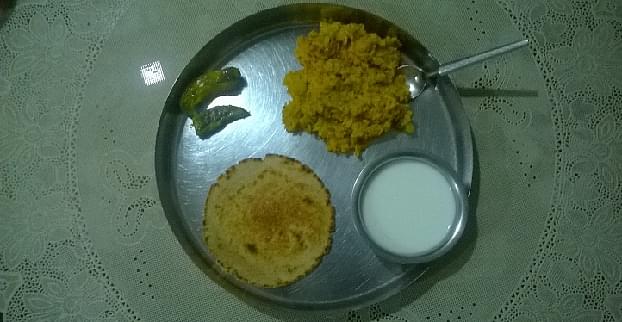 There are over 100 varieties of Khichdi in India, and yet when it comes to bhog, there is none that rivals the khichuri bhog of Durga Puja. Such is the legendary addiction to this ‘simple dish’ that even the royal family of Tripura adopted it for their Puja rituals!

“Each spoon of flavoursome deliciousness,” Robert Clive is said to have whispered to Warren Hastings after his first taste of the Durga Puja khichdi bhog at the Shobha Bazar Choto Rajbari at 33 Raja Nabakrishna Road. Nearly two centuries later, little has changed when it comes to describing the omnipresent khichdi. Still delicious, still addictive and still one of the biggest highlights of the Durga Puja, the khichdi or khichuri has remained the single big reason that most non-Bengalis too look forward to this festival.

So what is it about khichdi that makes it such wonderment? To begin with, it’s nothing like Job Charnock’s (the first British to be sample the dish at Sutanuti, old Kolkata) description of a “simple mess of lentils and rice cooked in an earthen pot.” Replicating the taste of the dish, even with a recipe and ingredients given in hand, has a success ratio of 3:10, and that is a liberal estimation.

And yet, interestingly, it was this ‘simplicity’ that was one of the primary reasons why khichdi was chosen over the meetha bhaat and mete chorchori (spicy mutton dish) by Raja Kangshanarayan of Taherpur when he organised the first Sharadiya (Autumn) Durga Puja back in 1606. And later by the twelve friends from Guptipara (Hoogly), who organised the first community Durga Puja or the ‘baro-yaari’ puja in 1790.

Little did Kangshanarayan know then that the khichdi he chose for the easiness of preparation – ‘any cook will be able to make it’, the Raja had declared – will eventually become the most loved yet the most difficult dish to replicate. Such has been the inability to recreate the same flavour that the khichdi now suffers from Cinnamon’s Christmas syndrome. Much like the spice that smells divine during X-Mas, the khichdi too tastes the best during puja. If the science of palate is to be believed, then the assumption does have a tiny bit of logic to it; the palate during autumn months takes on a little moistness that allows it to identify and relish subtle flavours of spices like cumin.

But back then, the choice of khichdi was done for two reasons: one, the Autumn Durga Puja began as an excuse to feed villagers who had had a bad crop year or a famine, which made khichdi the best option as it was a meal in itself and with ready resources; and two was religious reason. With most zamindars being non-Brahmin, khichdi was the perfect guise to serve rice as back then non-Brahmins serving cooked rice was seen as a sin!

In fact, this was the reason that the bhog in Durgabari Temple in Tripura for the five-day festival was essentially the creamy khichdi that masqueraded as a good mutton/fish dish. Of course, the later rulers of the Manikya dynasty borrowed the Bengali khichuri because it was better tasting and vegetarian. But more on that later.

Coming back, the ritual that began as a goodwill gesture soon transformed into an annual feature. By the late 1500s, it was seen as status symbols where zamindars outdid each other on who could organise a better Puja, and this included the food as well. This tug of war, many believe, led to the evolution of the bhog thali, which in its earlier days had khichdi and ladoo or one vegetable dish depending on what was available in large quantities. The idea of donating, a gesture that the community Durga Puja infused among people, was little known those days. Food still remained what the landlord’s godown could offer, or he was willing to afford. Sweet payesh made of gur was among the first to join the plate, closely followed by tomato khatta (a relish made with dates, raisins, sugar and tomatoes), labda (a mixed vegetable curry) and the all-popular baigun bhaja (fried eggplant fritters). Of course, going elaborate also meant the generous inclusion of a dish made of fish, mutton and eggs too. An old record states that the Shobha Bazar Choto Rajbari Puja had over 51 dishes for guests to enjoy.

But khichdi remained the essential bhog, with every family adding their own bit. Yet the one thing that remained unchanged was its taste – creamy, filling with a rich buttery aftertaste. Interestingly for many maharajs (cooks) employed at these zamindars’ palaces, the Puja became the best platform to showcase their culinary skills. A popular story goes that a maharaj in his zeal to cook the most lavish feast for the guests of the Puja had forgotten the pilaf, which was a mix of lentils, vegetables and rice and by the time they remembered, it had turned into a mish-mash. The dish had been cooking for three hours and looked almost like South Asian kedgree. In his last bid to salvage whatever could be, he poured in another generous amount of ghee, bay leaf and cumin, which was partly roasted and pound into a coarse powder. The khichuri was hugely appreciated, and since then a pasty, buttery, aromatic khichdi that has been cooked for hours became a benchmark for a good bhog khichdi.

It was somewhere between the ‘bari puja’ of zamindars and the rise of the ‘sarbojinin durga puja” (community Durga Puja) that the khichdi transformed into the dish that we know today. Cooks soon realised that gobindbhog, an aromatic rice variety from West Bengal, was the right choice for the dish. Often a choice for pilaffs and kheer, the rice had the right amount of starch to impart the sweet buttery flavour without the need for caramalising in ghee, a biryani technique that had reached Bengal with the Mughals. The fact that it took subtle spices and married beautifully with all kinds, of lentils, especially chanar dal, a common favourite, made it a good choice for khichdi. And then of course the slow cooking style, which was adopted from the khansamas, was perfect for enhancing the flavours with vegetables giving it more texture.

Curiously, it is this little science that works even today to give the khichdi the unique taste. The first of the dishes to be made in the kitchen, the making of khichdi begins first with the dal. When it is 40 per cent cooked, the pre-soaked rice is added. This is important as it regulates the starch in the rice, so you get the right creaminess, followed by the spices – cumin incidentally is put twice, and many say that is the secret ingredient of taste – and vegetables, which are cut in a way that all three ingredients – the rice, lentil and veggies – cook at the same time. This is left on a slow flame to cook for the rest of the time that other dishes are prepared, which is easily about two to three hours.

The slow cooking allows the vegetable to infuse their own flavours into the khichuri giving it the rich, aromatic flavour. Finishing off a khichdi is done with ghee that gives it that elegant richness and keeps it moist. So when you take the first bite, you can taste three flavourful layers of the khichdi – the first being the ghee, the next is the subtle flavours of the spices and third the warm, gooey flavours of a “simple mess of lentils, rice and vegetables.”