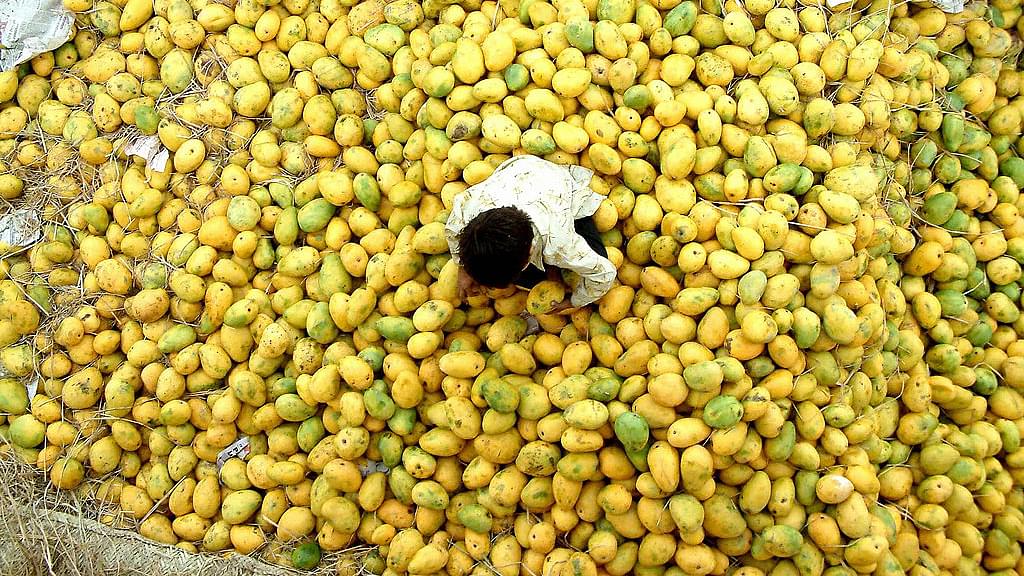 We all know about how Babur, after the victory of Battle of Panipat, became disillusioned with Indian food and established a courier system that could connect him to Samarkand. And in doing so, gave India its vibrant fruit basket. But have you ever wondered about what made him come to India?

Sure, there was the invite of Daulat Khan Lodi, who promised him a good part of the Lodi Empire and the war booty, which would be a worthy trophy after Kabul, but to convince him to face Rana Sanga of Mewar (a feared warrior then) needed something far unique. And that “something unique” was mangoes.

It is said that Babur became so fond of this fruit that the melon neophile actually decided not only to be a part of the war, but also lay the foundation of the Mughal empire here.

What of course no one told Babar then was mangoes was a summer fruit, and seasonal. Not given to whims ( as his successors turned to be), Babar decided to nevertheless stay, cleverly dividing his time among his territory, till newer ways of getting his other favourite fruits could be devised.

Incidentally, it wasn’t the first time that mango – which Persian poet Amir Khusru called it Naghza Tarin Mewa Hindustan (the fairest fruit of Hindustan) – would be at the centre of a new kingdom or an alliance. A few decades later, his great grandson Aurangzeb had offered mangoes to Shah Abbas of Persia to support him in his fight for the throne. Later on, the King of Balkan too had offered Aurangzeb 200 camel loads of dry fruits and mangoes as a peace treaty.

Folklore is that Humayun while on the run from India to Kabul and ahead ensured that mangoes was in good supply, which thanks to Babar’s courier system worked, albeit with a few lapses.

The mango obsession was in fact the only legacy that flowed untarnished from one generation to another in the Mughal rule. While Akbar built the Lakhi Bagh (near Darbhanga) of 100 thousand mango trees – one of the earliest example of grafting of mangoes, which the Nawab of Rampur tried emulating under the Crown’s rule – grandson Shah Jehan – the most indulgent emperor – built a special courier lane between Delhi and Mahratta Coast so that he could have mangoes till the beginning of spring, especially those coming from one tree in Mazagong, from which, says Mrs Graham Journal, all the mangoes available in the court were grafted.

So deep was Shah Jehan’s obsession with mangoes that he had his own son Aurangeb, the then Vazir of Deccan, punished and house arrested because he had dared to have all the mangoes himself.

In fact, many believe that one of the reason that Shah Jehan liked Dara Sikoh and chose him as his heir apparent was because Dara was a seasoned horticulturist, and had curated the “Nuskha Dar Fanni Falahat,” which not only detailed the manner in which all the varieties of mangoes in the orchard and other places were grafted, but also ensured that the gift of mangoes continued for his generation. The book is today one of the finest piece of work on the traditional art of grafting.

Abul Fazal’s Ain-i-Akbari and Tuzuk-e-Jehangiri are the only other two books that not only have detailed accounts of the varieties of mangoes, each segregated by quality, smell, shape, aromas but also how each of the emperors loved theirs. After all, each emperor built his own orchard just to ensure he had enough of the fruit – and in varieties.

So a second orchard of grafted mangoes was grown by emperor Jehangir in Lahore (Pakistan) and the third at the “Jharna Qutub” village (now known as Shamsi Talab Mehrauli) was commissioned by Shah Jehan, who considered mango the vitality fruit.

Of course, Mughal patronage to horticulture led to thousands of mangoes varieties that were grafted, including the famous totapuri, which was the first variety to be exported to Persia and other kingdoms. This list should also include the rataul, grafted by Kareemuddin in 1874, and the most expensive of all, kesar, which was first cultivated by Nawab of Junagarh in 1931.

Others came as odes to victories like chausa that Sher Shah Suri introduced on the eve of his victory in Chausa (now Bihar) against Humayun in 1500s. Characterised by a uniformly yellow-golden colour, it was available from July to August, just like the oval shaped, green colour langra that came a few years after. In fact, the juiciest dussehri owes its birth to the Rohilla Chieftains.

When it came to relishing their favourite addiction, while all emperors liked it in the natural state, Jahangir and Shah Jehan were a little more adventurous and awarded khansamas for their unique creations like the Aam Panna, Aam ka Lauz, Aam Ka Meetha Pulao, a delicate mango dessert that would be sold all through the summer at Shahjehanabad. So fond was Jehanara of the latter seasonal dessert that it was in the must-list not only in the palace, but also the numerous get togethers that were hosted by the Princess at Chandni Chowk.

Mangoes were also the peacemakers between Jehanara and Aurangzeb when years later over plates of mangoes done in every imaginable dish possible, the eldest daughter of Mumtaz Mahal agreed to become the Padishah Begum (Lady Emperor and head of the harem) once again. She had taken this position after her mother’s death on her father’s insistence.

It is said that the otherwise astute Aurangzeb was only malleable while he was having a mango, and in the years to come Jahanara often used the sweet summer fruit to convince him for various alliances and to be lenient to his sons, especially Akbar. In fact, Aurangzeb who had given up most of the Mughal lavishness his father and grandfather were known for, would spend Rs 1000 on food, if mangoes were in season. In fact, it was his aphrodisiac when he couldn’t find the comfort of Udaipuri Mahal – his beloved wife and companion till the end.

Interestingly, however mango as an aphrodisiac wasn’t the doing of a Mughal emperor but of Alauddin Khilji, whose feast in Sivama Fort is referred to as the real mango extravaganza. Nothing but mangoes in all their forms were on the menu. It is said that Khilji, high on the mangoes and its dishes, called it a night soon to visit his wife. And the next day announced mango to be his viagra. How true the claim was is hard to ascertain now, but after Khilji, mangoes became the new love food in the harem. Even Nur Jahan, the Empress, was rather fond of the mango drink and used a mix of mangoes and roses to create wines for Jahangir.

But Mughals weren’t the only lovers of mangoes or the creator of the mango harem (read: varieties) and patrons.

Mangoes in fact were much a part of the ruling class and were held in high esteem since ancient times. Be it determining fashion, especially that of the jewellery, in Indus Valley, or as a title under Kalidas. In fact, back then, aam was an honour, and was often used as a suffice by eminent people or those rising to the position of eminence like the famous courtesan of Vaishali, Amra Pali.

Apart from being an important tool of diplomacy, mangoes, which became Aam thanks to the Persian Court, also represented faith and prosperity.

While Ashoka and Kharavela Kings turned mango trees that dotted the roads and highways as their sign of prosperity, Raghunath Peshwa planted 10 million mango trees as a sign of Maratha supremacy. Folklore has it that it is one of the trees’ fruit that was eventually turned into Alphonso.

In fact, for a good part of the Mauryan rule and later, when Buddhism thrived, mango trees were considered as the beacon of knowledge and peace, and planting them a necessary act of faith. In fact, apart from the monks, who found mangoes to be naturally ready food, the Munda tribe and the Dattaray sect by Swamy Chakradhar were instrumental in taking this rich fruit to the masses. This perhaps explains the far reach of mango trees in India, because wherever Buddhism went, mangoes went along. It is said that among the few things that Alexander took away from King Porus court was mangoes.

Courtesy puranas that condemn felling of mango trees, there are trees as old as 3500 years in India like the one in Ekambreshwar Temple in Kanchi or the legendary Dusseri tree in Lucknow, which convinced Asaf Ud Dauala to create the Ramadan Market that began from the Chowk to Akbari Gate and the famous Chappar in Chandigarh, the only mango tree in the world to have a 32 feet girth that prove the age old love for mangoes in India.

Mango retained much of its superiority even during Bahadur Shah Zafar’s time. He was said to be fond of the fruit that featured prominently in paintings, crockeries, festivals and even in iftar parties. Bereft of much of grandeur of his ancestors, the Last Mughal is said to have found solace among poets and his favourite mangoes.

A famous story reiterated by Ghalib’s memoirist Altaf Hussain Hali goes thus: One day Bahadur Shah, accompanied by Ghalib and a number of other courtiers, were walking in the Hayat Bakhsh or the Mahtab Garden, a garden that was reserved exclusively for the king and his queens and members of the royal family. Ghalib looked at the mangoes repeatedly, and with great concentration.

When asked, the mango neophile wittily replied, ‘My Lord and Guide, some ancient poet has written: Upon the top of every fruit is written clear and legibly; ‘This is the property of A, the son of B, the son of C.’ I am looking to see whether any of these bear my name and those of my father and grandfather.’ Zafar smiled and the same day had a big basket of the finest mangoes sent to him, thus starting a friendship that lasted well into his last days in the palace.

The change of power eventually affected mango – which fell from its position of empire builder to simply a fruit. And in the days to come, many of the varieties disappeared from the scene. What didn’t disappear was its sweet happiness – that even today makes it one of the best fruits for summer!