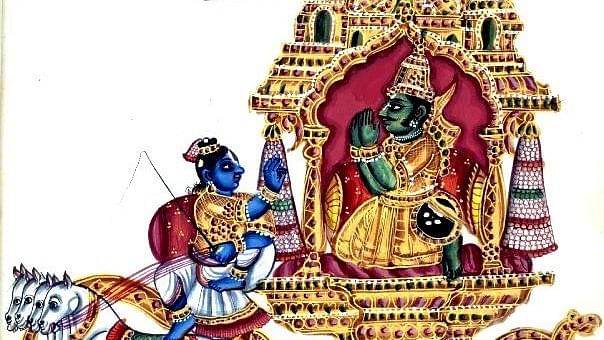 Sushma Swaraj’s call is bewildering and embarrassing for many practicing religious Hindus.

There is much uproar over the call by External Affairs Minister Sushma Swaraj to declare Bhagavad Gita as “National Scripture”. Predictably, opposition parties have latched on to this statement and started attacking the government for the lack of “secular credentials”. Assorted anti-Hindu elements are also joining the chorus, using this opportunity to express their hatred and contempt for the Gita and the Hindu religion on the pretext of opposing the government.

Actually such a statement by the Minister is bewildering and embarrassing for many practicing religious Hindus, but for totally different reasons.

The very concept of a single exclusive National Scripture is against the Hindu spirit. The central idea of a scripture or a holy book guiding and directing every action of its followers is a hallmark of Abrahamic religions like Islam and Christianity, and not Dharmic religions like Hinduism and Buddhism. Dharmic religions do not have “The Book”, but have an entire tradition of sacred knowledge consisting of many books and schools of philosophy, restated and re-interpreted for every age (yuga) in a dynamic continuum.

In fact, Ekatmata Stotra (Hymn of Unity) sung in all RSS shakhas as a daily prayer, offers salutations to this entire sacred knowledge tradition extolling it as jnana nidhi, treasures of knowledge.

Four Vedas, Puranas, all the Upanishads, Ramayana, Mahabharata, Gita, True Philosophies (Darshanas), Jain Agamas, Tripitakas (of Buddhism) and the verses of Guru Granth—we must always revere these treasures of knowledge with devotion, from the core of our heart .

Though not mentioned explicitly in this list, voluminous Bhakti and philosophical literature in Indian languages other than Sanskrit is also as much an important part of this sacred knowledge tradition. This literature is not just translation or mere echoing of Sanskrit texts, but is born out of unique Hindu spiritual and cultural experiences of many sages and saints of various regions and communities of India.

Enlarging the scope still further, the overall Indian knowledge tradition should include not just sacred texts, but also texts that cover important aspects of life, like Arthashastra (governance), Thirukkural (ethics), Charaka Samhita (health), Natya Shastra (arts) and so on.

All these are our national scriptures, from an Indic and Hindutva viewpoint.

No doubt that certain books, like the Bhagavad Gita or the Yoga Sutras of Patanjali have an exemplary and lofty place even within this tradition. They are considered as canonical texts and rightly so. For example, Gita is one of the three canonical texts (Prasthana Traya) of Vedanta Philosophy, the other two being the Principal Upanishads and the Brahma Sutra. In some Vaishnava sects, Gita is considered as the highest holy book of divinely revealed knowledge. But many other Hindu sects, while not totally rejecting the wisdom of the Gita, may not also accord such a supreme position to it.

The Hindutva movement, from its very inception, has stayed above the sectarian differences within the Hindu fold, and has cultivated equal respect to all sects and traditions. The RSS Ekatmata Stotra has attempted to give representation to all major denominations and schools of Hinduism and regions of India. As a young boy growing up in Chennai, I got to know about Sant Ravidas, Jhule Lal of Sindh and Lachit Borphukan of Assam only through this hymn. I am sure many Swayamsevaks in other parts of India would have similarly been introduced to Thiruvalluvar, Nayanmars, Azhwars and Rajendra Chola.

It is as important to respect and preserve Hindu diversity, as it is to nurture and grow Hindu unity, because diversity and plurality are the hallmark of Hindu civilization, RSS chief Mohan Bhagawat deftly put this point in the just concluded World Hindu Congress. Declaring the Gita as “National Scripture” might suit the ISKCON agenda, but certainly not a Hindutva agenda.

“PM Modi gifted the Gita to US President Barack Obama, which means it has already received the honour of a national scripture” –This argument by the Minister simply does not cut it. What is important to note here is that PM proudly gifted something that truly represents the greatness of our nation and culture. It could very well have been a bronze statue of Nataraja, the Cosmic Dancer or a patua painting of Devi Durga. So, how many such National Symbols are we going to keep declaring?

I admire and respect Sushma Swaraj for openly expressing her deep personal devotion and shraddha, when she says “I am able to face the challenges as minister only because of the teachings of the Gita. The book contains answers to everybody’s problems”. But personal feeling alone cannot be the criterion for making national policy decisions.

Making a locket or a charm with the shlokas of Gita and wearing it on your body is also an expression of personal devotion. But it does not do anything beyond the tokenism. Treating the Gita Mata, the Mother of Eternal Wisdom, with such a gesture is truly an insult to the Gita, rather than any respect.

It is important to recognize the difference between the orthodox and traditional orientation towards the Gita (and our entire culture, in general) and the civilizational and nation-building orientation towards it. Swami Ranganathananda puts it beautifully:

“People mostly read the Gita as a pious act, and for a little peace of mind. We never realized that this is a book of intense practicality. We never understood the practical application of the Gita’s teachings. If we had done so, we would not have had the thousand years of foreign invasions, internal caste conflicts, feudal oppression and mass poverty. We never took the Gita seriously; but now we have to. We need a philosophy that can help us build a new welfare society, based on human dignity, freedom and equality. This new orientation, this practical orientation was given to the Gita for the first time in the modern age by Swami Vivekananda.”

(Preface, The Charm and Power of the Gita)

Now, therein lies the solid reasoning and justification as to why the Gita is so important for India. But such a declaration is hardly the right method to implement the noble intent of taking the Gita seriously.

Instead of such silly and childish acts, which result in mere empty symbolism with much sound and fury, the Modi government should create an amicable academic atmosphere and sound environment where Hindu texts, culture, philosophy and tradition can be taught gently and beautifully, creating a lasting impact on the next generation. Concrete measures should be taken to remove and eliminate existing anti-Hindu biases and prejudices in academic and cultural institutions. Let this episode become a motivation in that direction.