Guru Nanak Gurpurab: A Dedication To The Brave Sikh Community 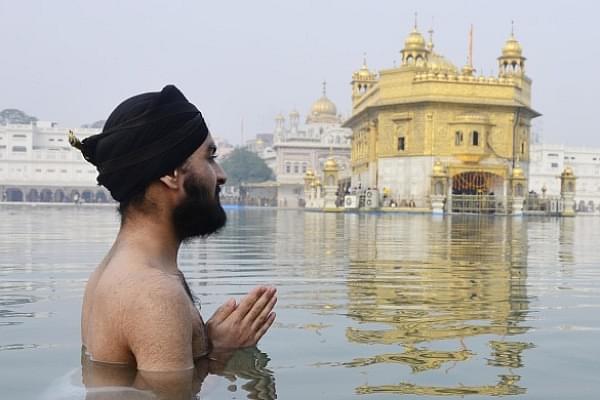 A Sikh devotee takes bath in the holy sarovar and pays obeisance at Golden Temple in Amritsar. (Sameer Sehgal/Hindustan Times via Getty Images)

My years in the Indian Army, as an Army brat and an officer, taught me the love and respect I carry for all faiths and ethnicities in India.

It’s a part of service life because one has friends, superiors and subordinates from all over India, representing the country’s vast diversity. Most of all, those years instilled in me the realisation that not many nations give their citizens a chance to share their lives with people from a diverse stock.

Being a part of the services community was an education in sensitivity and pride in the wider plurality of India. The Army, of course, is a great example of unity in diversity, India’s greatest asset and contribution to humanity.

On Gurpurab, my sincere good wishes to our Sikh friends and indeed to the Sikh people all over the world. I wish to convey to them that they follow a great faith, sensitive in respect for others, rich in its history of sacrifice and unique for its great sense of tolerance for plurality.

They are a people famous for loyalty and friendship. To them, I doff my hat because they contribute to India’s uniqueness far more in proportion than the numbers they exist in.

When a flood hits Kashmir, it is their gurudwaras that contribute food packets in hundreds, all cooked by volunteers. When Muslims do not have a place to offer their Eid namaaz, they offer them the facilities of their gurudwaras.

When Rohingyas at the faraway borders become refugees, Sikhs offer them solace and relief without asking for anything in return. Is there anything Sikhs do not do to enhance feelings of oneness among human beings?

Once, I was invited to a college in Ludhiana to deliver a motivational talk to a group of people. There was a large Sikh presence in the audience – people of all ages and professions. I was clear in my mind about what needed to be spoken.

Commencing slowly and softly, I stated that I was a reluctant speaker because I knew I was addressing a great community of people. I told them I had not come to Ludhiana to motivate them because, in my opinion, the Sikh community needed no encouragement and no motivation.

In fact, I had come to be motivated by their collective presence, by their history of courage and fortitude, their passion for life and, most of all, their humility. The followers of the great Guru Gobind Singh needed no one to come and give them lectures in courage and motivation.

The tears in their eyes said it all. It’s a memory close to my heart.

How does humility connect with Sikhism? For those who may never have had the pleasure and honour to visit a gurudwara, it’s a visual treat to observe the cleanliness around; volunteers there can put any ‘swachch’ campaign to shame.

The devotion is intense, with volunteers undertaking every possible chore to make the community event successful. You won’t ever feel the need to secure your footwear because there will be many people to protect your possessions with their lives.

The ‘guru ka langar’ or the community lunch, eaten together by devotees, is an exercise in devotion, love and humility. Volunteers cook a simple fare, but the divine hand of the gurus instills in that fare a taste that you cannot find anywhere.

The driest of rotis and the simplest of dals (lentils) combine to give a flavour touched by the gods. Anyone and everyone is welcome with no questions asked.

Stories abound of experiences of people who have stopped at gurudwaras in emergencies and had food served at odd hours before they could even utter a word about their problem.

When it comes to fun and games, none can beat the Sikhs. They know how to laugh at themselves and can out-drink and out-dance anyone. Their boisterousness can be a tad unnerving for a few of those who are more sedate in outlook.

Friendships with them come from the oddest of things. During my school days at the hostel, at the beginning of the year, I always feared to have my bed next to a Sikh friend. For no other reason but that I had to rise 30 minutes earlier to help my young friend wrap up his turban with that amazing thing called a pooni (prepared voile cloth).

Young Sikh boys wrestling with outsized turbans were a common sight in those days when the patka (a smaller head covering) was considered highly informal. Today, none of my Sikh friends allow me to help them with the pooni because they refuse to believe my prowess and experience in this fine art!

Through my growing years, I was fortunate to see many Sikh units in my father’s command and equally many Sikh friends with their families who visited us, as we visited them. The throaty cries of “Bole so Nihal, Sat Sri Akal” from those days still reverberate in my memories.

In my years as a senior officer, I had a unique way of paying obeisance to Guru Nanak on Gurpurab.

First, as much as could be helped, I had one of the Sikh units from my formation mount the residential guard or provide protection to a convoy of vehicles. This allowed me to visit them first thing in the morning and do a matha teko (prostration) at their small gurudwara.

Second, I would use a helicopter to visit every Sikh unit of the formation, do a prostration at the unit’s gurudwara and present sweets. The round-robin visit would end at the unit deployed at the most difficult location.

I would partake in the Guru ka langar there with the troops and all devotees of the revered guru; many local villagers would usually join in.

The Army continues to be an institution that consciously promotes India’s unity in diversity through the ‘sarv dharm sthal’ concept; all faiths praying beneath one roof with symbols of every faith together on display.

That is why soldiers are comfortable with any religious symbolism, any devotional music and any sermon being addressed to them. It is because they are uniquely the Indian we must all desire to be.

This article was originally published in 2017.