Hindutva And Cultural Nationalism: The Missing Chapter In Netaji’s Life 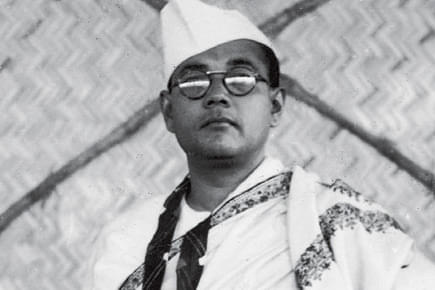 Indian historiographers have deliberately brushed aside a significant chapter on Netaji Subhas Chandra Bose. Today, as the nation commemorates the 120th birth anniversary of the most admired nationalist-revolutionary, it is significant to lay bare the unread chapter on Netaji’s life.

A careful study of the life and times of Netaji clearly suggests that the great patriot championed the cause of Hindutva and cultural nationalism. As a quintessential Hindu, Subhas Chandra Bose considered Vedanta and Srimad Bhagavad Gita as his sources of inspiration in the fight against the British.

A young Subhas was moved by Swami Vivekananda’s teachings on universalism and his fresh interpretation of Indian scriptures. Similarly, the writings of Sri Aurobindo had a lasting impression on his mind. In addition, Bose drew influences from Bankim Chandra Chatterjee’s teachings. All those together helped shape up his social-political activism, loaded with a nationalistic fervour and driven by a religious fascination ever since his young days.

I cannot write about Vivekananda without going into raptures. Reckless in his sacrifice, unceasing in his activity, boundless in his love, profound and versatile in his wisdom, exuberant in his emotions... I can go on for hours and yet fail to do the slightest justice to that great man. He was so great, so profound, so complex. He was a Yogi of the highest spiritual level, in direct communion with the Truth, who consecrated his whole life to the moral and spiritual uplift of humanity.

With him, religion was the inspirer of nationalism. He tried to infuse into the new generation with a sense pride in India’s past, of faith in India’s future and a spirit of self-confidence and self-respect.

The imprint that Sri Aurobindo had on Subhas Chandra Bose’s mind could be read in this account from his memoirs An Indian Pilgrim written in 1937. Bose wrote:

In my undergraduate days Arabindo Ghose was easily the most popular leader in Bengal.... a mixture of spirituality and politics had given him a halo of mysticism and made his personality more fascinating to those who were religiously inclined.

As a college student it was not the mysticism surrounding Arabindo’s name which attracted me, but his writings and also his letters....We felt convinced that spiritual enlightenment was necessary for effective national service.

In his book Taruner Swapna (Dream of a Yong Boy), written in Bengali, Subhas defined his vision for the motherland drawing influences from Bankim Chandra Chattopadhyay’s Anandamath.

Subhas Chandra Bose tactfully used the Hindu symbols and festivals as a strategy against the British to form public opinion. For example while he was locked inside Calcutta’s Mandalay Jail in 1925, Bose organised Durga Puja in the jail premises and demanded that the prison authorities must bear all the expenses. But when the prison authorities turned down his demand, Subhas went on a hunger strike. That helped shaping public opinion and shook the British administration.

In his book, Brothers Against The Raj, noted historian Leonard A Gordon explained how Subhas Chandra Bose’s political activism, coupled with his religious exploration, set him apart from his contemporaries like Jawaharlal Nehru. Gordon wrote:

Inner religious explorations continued to be a part of his adult life. This set him apart from the slowly growing number of atheistic socialists and communists who dotted the Indian landscape.

For Subhas Chandra Bose, Hinduism was an essential part of Indianness.

He was in no sense a bigoted or even orthodox Hindu. But he had grown up in the first two decades of the twentieth century in Bengal, where, owing to the influence of Bankim Chandra Chatterjee and Swami Vivekananda, there was a fusion of religion and nationalism, so that the nationalist feeling had a pronounced Hindu complexion and Hinduism a pronounced political character.

In his address as the General Secretary of Congress at Maharashtra Provincial Conference on May, 1928, Bose said:

Indian nationalism is inspired by the highest ideals of the human race, satyam (the true), shivam (the God), sundaram (the beautiful). Nationalism in India has ... roused the creative faculties which for centuries had been lying dormant in our people.

Netaji Subhas Chandra Bose was thoroughly influenced by Vinayak Damodar Savarkar – the founder-president of Hindu Mahasabha – who is considered as the godfather of modern Hindutva.

On 21 June 1940, a meeting between Subhas Bose and Veer Savarkar reportedly took place at latter’s residence in Dadar to “explore the possibilities of co-operation between Forward Block and Hindu Mahasabbha”. The meeting was said to have changed Netaji’s course of action. It was Savarkar who had advised Subhas “not to waste time organising protests for the removal of British statues like Holwell Monument in Calcutta.” Instead, Savarkar suggested Bose that “he should smuggle himself out of the country, reach out to the axis powers and raise an Indian Army of liberation out of Prisoner of War (PoWs).” Savarkar was said to be in touch with expatriate nationalist leader Rash Behari Bose.

When due to misguided political whims and lack of vision, almost all the leaders of Congress party have been decrying all the soldiers in Indian Army as mercenaries, it is heartening to know that Veer Savarkar is fearlessly exhorting the youths of India to enlist in armed forces. These enlisted youths themselves provide us with trained men and soldiers for our Indian National Army.

In May, 1952, during the dissolution celebration of Abhinav Bharat, this is how Savarkar paid his tribute to Netaji Chandra Bose.

“Long live deathless Subhas. Victory to the Goddess of freedom.”