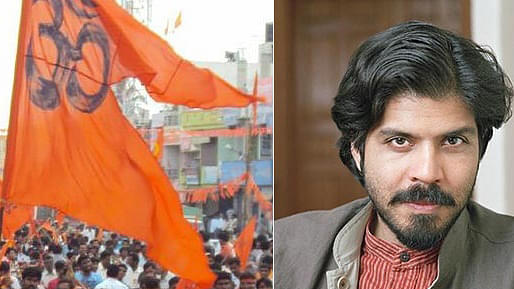 Pankaj Mishra, a perennial Hindu/Hindutva-basher, was at it again. Writing in The Times of India on 22 January, he concluded that “Hindu nationalism is more Italian and Christian than Sonia Gandhi.” He based his provocative conclusion on the fact that Veer Savarkar was deeply influenced by Italian nationalist Giuseppe Mazzini, an exile like Savarkar, who defined nationalism through notions of sacrifice and martyrdom.

Mishra suggests that “Savarkar could not have formulated his messianic nationalism without the help of such deeply Christian ideas of sacrifice, martyrdom, resurrection and redemption that his hero Mazzini introduced into the political discourse of the 19th century. Indeed, Mazzini's fantasies of re-establishing Akhand Italy and Rome Raj hover over every page of Essentials of Hindutva; his pseudo-Catholic obsessions have suffused all subsequent Hindu nationalist dreams of a common blood, fatherland, civilisation, and holy land.”

This is typical of those who want to discredit the idea of Hindutva by suggesting that it came from one of their opponents or enemies. Hence the reference to Akhand Italy and Rome Raj, and “pseudo-Catholic obsessions”. Hence also the need to claim that Hinduism and Hindu consciousness were creations of 18th and 19th century European Indologists.

Modern-day critics of Hinduism also seek to provoke a wild response from their intended targets, thus enabling Mishra to exclaim, “See, I told you so. These guys are lunatics.”

However, the Mishras do deserve a response, and votaries of Hindutva need to rebut cogently, and not with abuse and rejections of his assertions. The problem is both Mishra and the wilder Hindutva elements are coming from the same place: they have internalised the western critiques of Hinduism to such a degree that they end up at two extremes: either as self-loathing Hindus, or as extreme defenders of all things Hindu. For the former, Hinduism can do no right; for the latter, Hinduism represents all that is wise and wonderful. There is no modern day wisdom or learning that did not exist in the Vedas or Upanishads or the Gita.

This binary is what we need to escape from, and those who believe in Hindutva owe it to themselves to engage with their critics, as both have come to opposite conclusions from the same western critique. More importantly, Hindus need not think that absorbing any idea from the west or other religions somehow diminishes them. The Japanese are not any less Japanese after they adopted western dress and ideas post the Meiji Restoration.

The reason why Hindu responses to critics like Mishra is less than cogent is because they fear some of his criticisms may be valid. So there is need for denial. Moreover, modern-day Hindu organisations – the Vishva Hindu Parishad (VHP), the Rashtriya Swayamsevak Sangh (RSS), et al – have not resolved some essential contradictions in their approach to reinventing Hinduism for the 21st century. Till they take a call on these dilemmas, the Mishras will walk all over them.

Take a simple issue like religious conversions. It is clear that both Christianity and Islam are proselytising religions, and the preferred Hindu response is to ban conversions. But in a world where “freedom of religion” is claimed to be a big virtue, this won’t wash.

A weak response to the challenge of predatory proselytisation is the RSS’s Ghar Wapsi programme, which is essentially an attempt to pretend that this is not a conversion, but a call to those who converted to other religions in the past – whether through force, fraud, inducements or genuine convictions – to return.

It is too defensive to work. It’s like trying to defend when your rivals are attacking. The attacker needs to win only once to break you, but you need to get your defence right 100 per cent. Ghar Wapsi is irrelevant to those who converted at least two or three generations ago, for conversion becomes hard fact by the third generation. Those who are born into a religion, do not think of themselves as lapsed co-religionists. Ghar Wapsi can thus address only recent converts, but this automatically reduces the focus.

But opting formally for a proselytisation strategy means creating the infrastructure and technology for managing this transition. It is long-term work. It needs commitment, money, propaganda, and institutions to carry it through over generations.

Sooner or later Hindu organisations, if they are concerned about reducing numbers, have to bite the bullet on becoming proselytisers. The Pankaj Mishras will say this is “pseudo-Catholic” or evangelical influence, but it does not matter. Pig-headedness is not a virtue, if Hindu society concludes that it cannot be an ever-contracting society.

Instead, they should pointedly ask whether change is good or bad for Hindu society? If proselytisation is fine for the rest, why not Hindus? I am not saying this is what Hindus should or should not do, but if numbers are a concern, it is best to address the issue squarely and not through subterfuge and confusion.

The second dilemma Hindus face is a real one: once you decide that Hindus are going to be more proactive about their beliefs and religion, Hinduism will not be what it is now. This is a reality. When you decide to fight, you become more like your enemy. You have to study him and adopt his tactics, albeit with your own nuances and improvements added.

Once again, the critics will say Hinduism is being Abrahamised, becoming more monotheistic. But this is normal. It is worth recalling the early reformers like Raja Ram Mohan Roy’s Brahmo Samaj drew ideas from Christianity. Today some Hindu elements criticise him for doing this. The Arya Samaj tried to make Hinduism more monotheistic, and rejected the authority of all holy books except the Vedas. Mahatma Gandhi drew inspiration from the Sermon on the Mount, and some of his critics have labelled him more Christian than Hindu.

Two exhibits explain this. Judaism, unlike other Abrahamic faiths, is non-proselytising. Jews have, over their history, kept to themselves and taken harsh knocks from other religions periodically. But post the holocaust, something snapped inside the Jewish psyche, and they decided they will seek power and prestige, not take things lying down. They are now a fighting force, and not the old meek Jews anymore. They have become more like their Islamic foes.

Sikhism is another example. What started as an attempt to take on the challenge of Islam through reforms, but without abandoning Hindu iconography and idiom, morphed into something more militant and Islamic in appearance after Guru Gobind Singh. The Sikhs, despite a painless birth from Hinduism, are now believers in one book, the Guru Granth Sahib. They avoid idol worship, even though early Gurudwaras were full of them. In the process, Sikhism is less caste-oriented, and more aggressive than Hinduism.

One cannot know how Hindutva will shape up in future in response to threats, real or imagined, but one can be sure that if Hindutva radicalises itself, it will morph into something more aggressive than what we now think of as Hinduism. It will also be more egalitarian and disruptive of caste than what has happened so far. Radical religions tend to be more egalitarian, and also more violence prone. For egalitarianism is about changing the power structure, and power structures cannot be dislodged without the accumulation of power on the other side.

This is the second dilemma: Hindutva, if it really becomes radicalised with a strong social message, will not be the “tolerant” and quiescent Hinduism we know. The Mishras will have it both ways; if we change and become more radical, we will be told it is not Hinduism; if we don’t and change very slowly and start shrinking, they will say Hinduism equals casteism and stagnation and hence its demise was foretold.

A third dilemma relates to fundaments: Hinduism has few fundamentals, beyond a belief that there can be many approaches to the truth and god and a belief in karma. It is also comfortable with atheism and agnosticism. As a do-it-yourself system, Hinduism does not demand too much from you. You can be a rigid believer in god and rituals, or someone who abandons it all and still claims to be Hindu. You can take your beliefs seriously or with bags of salt. You remain a Hindu.

But most Hindus also believe that this freedom to be what you are, and take what you want from Hinduism and leave the rest, is what makes it weak and unable to fight back when aggressively proselytisers seek higher market shares in India. Themes of Hindu weakness have suffused as much of Swami Vivekananda’s writings as Mahatma Gandhi’s. The Swami wanted a Vedantic mind in an Islamic body, and Gandhi said Hindus were cowards and Muslims bullies. He wanted Hindus to be willing to sacrifice themselves in the cause of satyagraha, using non-violence as their hallmark of bravery and courage. The search for strength while retaining the essential “open architecture” of Hinduism – a term used by Rajiv Malhotra – is not going to be resolved anytime soon. If a choice is made, Hinduism will change; if no choice is made, Hinduism will shrink like Judaism in the past.

The paradox is this: Hinduism’s strength is its flexibility; it is also its weakness. It is not an easy paradox to resolve. This is what makes it easy for the Pankaj Mishras to criticise us for what we do and what we don’t.

These dilemmas have to be resolved one way or the other for Hindus to develop a sense of what they are about. Different Hindus may choose different paths. Maybe that is the solution. Aggressive Hindutva and mild Hinduism can coexist, one as an Abrahamic version of Hinduism, and the other as a shrinking, but still cogent, Hinduism as we have always known it.

Mishra is right that change may involve taking ideas from the “other”. But he is wrong to imply that this is something to be ashamed of. No people or religion or country can claim to have found all the answers for all times to come. They have to borrow or steal ideas from others. If Christians can steal our yoga and meditation techniques, and also repackage the wisdom of the Upanishads as Christian ideas, there is no reason why we can’t do the same.

There is no wisdom in refusing to learn from others. Hindus, when confronted with a difficult choice, tend to dawdle over it and let the contradictions remain. This is how we became masters of managing contradictions. But this may not be a viable option forever.