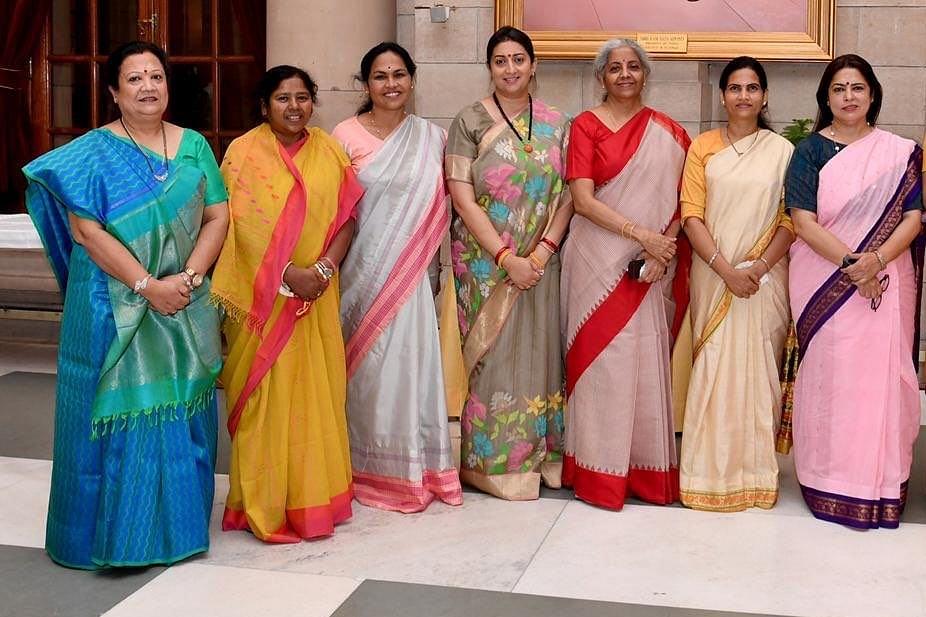 Nine women leaders who are members of PM Narendra Modi's council of ministers stood together for a group photograph on 7 July after the oath ceremony of the newly-inducted ministers. The nine women (among the 11) are draped in sarees.

In the group photograph, there is Surat MP Darshana Vikram Jardosh -- in the drape of the lone 'seedha palla'. Earlier that evening, there was something strongly familiar in how she walked to the podium for the oath. She held the saree pleats from the side with a light hand briefly, the seedha palla tucked elegantly. It stood out prominently as she took her oath.

The seedha palla is a special departure from how she herself would drape the saree on many usual work days as MP (evident in her photographs on social media). It's as if she was announcing a dictum loud and clear: special day, a milestone celebration -- hence -- the "seedha palla".

"Seedha palla" is how this author and women in her clan in western UP and Rajasthan (Nathdwara, Kota, Jaipur) address, wear and know this particular style of taking the palla from the right shoulder.

The palla, as in Darshana ji's drape, comes from behind her back to rest on her right shoulder, before it goes on to spread itself diagonally, across her front, carefully bordering over the left part of her front, remaining just there, its lower and heavier portion falling beautifully till her knees. In the process and drape, the seedha palla style of wearing the saree reveals the beautiful culmination of the weaver's work on that saree.

Darshana ji is from Gujarat, and the distance between her home (and state) and mine, seemed just the same length as the seedha palla.

My heartfelt gratitude to PM Shri @narendramodi Ji, Shri @AmitShah Ji, Shri @JPNadda Ji & Shri @blsanthosh Ji for having faith in me and entrusting me with this huge responsibility. pic.twitter.com/JfY51rz9MF

The seedha palla is the norm, essential, and a must for rituals, weddings, birth, teej, Krishna janmashtami, karva chaut, rakshabandhan, Ahoi Ashtami, Dusshera, Deepavali, Sharad Poornima, and other occasions of dharmic importance that celebrate the woman as the core -- in the family, state and cultural sensibilities this author comes from. Weddings see the diverse weaves from north south east west (no exaggeration) find Hindi-speaking takers.

On special days, any saree stands transformed in its own form, use, beauty and viewing, when draped in a "seedha palla". It transforms the women who wear it. It brings the unknown weaver to the foreground.

Darshana ji's act of choosing the seedha palla, would have culturally and emotionally resonated with women in Uttar Pradesh, Rajasthan, Bihar, even Uttarakhand and Jharkhand. They know what the seedha palla implies "elevation" -- spiritual, traditional, cultural, domestic, political.

Within Gujarat, Darshana ji's choice, a usual but exquisite one, simply announces the pride that Gujarati women take in the act of draping with the seedha palla. It is an exquisite way of celebrating the saree as visualised, as woven, as imagined, as thought, by the weaver. It gives the most unhindered, the widest and the most generous and gorgeous view to the "kalaa" of the weaver. The unknown and unseen weaver takes over the viewing of the saree when the seedha palla works, down from the right shoulder.

The palla is where the weaver gives the "saar" (gist) of his vision for "that" saree -- as evident in any weave from anywhere in India. The bold, the subtle, faint, the feeble, the said, unsaid, spoken unspoken, over thread and colour, motif and geometry, of that saree -- it all spreads itself on the palla.

And the seedha palla does complete justice to this story-telling from the weavers. It quickly wins for the unknown weaver the audience, stage, appreciation.

The best glimpse to the grandeur the seedha palla brings to a saree, and to the woman the saree celebrates, is to see noted artiste and vocalist Malini Awasthi use it -- especially during rituals, weddings in her family, performance, festivals, even special public interactions. The Banarasi saree pallu ignites her brilliance. The unseen weaver begins to speak and sing through the seedha palla she wears.

The seedha palla has suffered due to convoluted and shallow definitions of “influence”, “style”, “fashion”. It is looked down upon -- a sad aspect that Malini ji and Sumedha ji point out and I agree with and have experienced.

To know how Gujarati women have remained largely unaffected/untouched/ royally distant from the condescending attitudes towards the seedha palla, a simple tour of videos on social media would be enough. The seedha palla is often called "the Gujarati palla" in some videos and don't mind that. Not an inch or pinch. Gujaratis and Gujarat have been able to preserve several cultural aspects many elsewhere are caring less and less about. Seedha palla is a small element in that lot.

Malini ji mentions how the "seedha palla" is celebrated by Parsi women.

Coming to urban working women, it is the most comfortable drape to combine field and desk work. This author has draped practically every saree available in her almirah, including the cotton ones, with a seedha palla to every assignment -- politics/election/music/art/city reporting/ground reporting with comfortable long full sleeved tops, pullovers in winter, and T-shirts in summer. It's a breeze at work and on public transport -- even on the metro.

Malini ji generously points out that the seedha palla envelopes the symbolic and literal meaning of the aanchal.

She brings in a vital association of the seedha palla -- as aanchal -- and how the aanchal protects a mother's lap (goad), and nurtures motherhood. She puts in a cultural reminder -- that the "goad" (mother's lap) is in the front, and not at the back. Hence, the aanchal and seedha palla (that serves as the aanchal).

She adds that when one keeps the aanchal on the chest, which is the meaning of the seedha palla, it covers the chest, it protects one, totally.

Here are other plus points. One, in the way it transforms the saree, the women, and celebrates the weaver.

Two, it doesn't reveal (remember cliches such as 'heightens the sensuality'-bit for a saree marketed in film, media and entertainment) what's to be gracefully covered (as the body undergoes changes).

Three, it is handy, comfy, handsfree, easy on movement, and hence easy on work during festivals, weddings, rituals etc. The seedha palla is simply great for moving around pooja thhals, oil lamps, prasad, food, utensils, or even lifting up kids and running after them, even while the head is covered in the seedha pallu (in the presence of certain elders). It is great for working on the agricultural fields, in the kitchen, at desks, in Parliament.

Four, the hanging curve of the saree at the back before the palla comes to your right shoulder -- beautiful -- doesn't reveal what's not to be revealed.

I watched videos and visuals (for this article) of Rajput women from Gujarat who performed the talwar raas wearing the aanchal/chunari draped over the right shoulder. It made me wonder what perhaps would have been the role of this style of the palla for the woman Dharma preservers of different communities, in the past.

There is a striking and beautiful picture doing the rounds, a picture of a group of beautiful women of India wearing a selection of the most stunning textiles and designs of India , spectacular sarees all.

That they happen to be the movers and shakers, decision-makers, part of the highest decision making body in our democracy, the Union Cabinet of Ministers, is a crowning glory.

There is so much that can be said about this picture and the sarees, the textiles , the designs, the motifs, colours , the deep history of each weft and warp; there was a Gadhwal from Andhra Pradesh, a Banarasi from Uttar Pradesh, a Kanchipuram from Tamil Nadu, Tussar from Assam among others. Each has a unique story of its own but that’s not what we will talk about today.

Here we will talk about the aanchal or pallu, the drape of that part of the saree which shows off the intricate designing and weaving of the border and the end portion.

A bit of background. Draping a piece of unstitched cloth around the lower half of the body, one across the upper half and one tightly bound across the waist , the antariya, the uttariya and the kayabandh has been the fountainhead of Indic design and clothing, for both men and women, the source code from which all else is derived. That is a story in itself written about by this author many a time.

Drapery is and has always been the key to the clothes we wear. With the passage of time, the antariya has become the modern saree ensemble’s petticoat , the uttariya itself has morphed into the draped saree proper and the kayabandh has receded into the background remaining only for decorative purposes around the waist. Stitched cloth , which was a result of outside influence has its representative as the blouse or choli.

In the 20th century, the numberless ways of draping sarees across India and the Indian subcontinent were heavily influenced by the film industry, especially the increasingly popular and influential Hindi Films. Which brings me back to the picture I opened with; from the 1960s, it slowly became clear that the seedha palla where the beautiful aanchal was displayed over the shoulders and chest was elected as the symbol of backwardness, regressive attitudes and lack of fashion sense. The Lalita Pawars or stick in the mud mother-in-laws of the films wore seedha pallu and terrorised their daughters and bahus. The trendy Sharmila Tagores and Saira Banus wore their pallus short over their left shoulders, with form fitting blouses and tightly draped sarees. The trend stuck and the seedha pallu, pleated or just thrown over the shoulder has become the symbol of the “modern”, shoving every other drape and style to the background.

Contrary to general opinion, seedha palla is not confined to Gujarat but popular across India. UP, Rajasthan, Bihar, Jharkhand, you name it and you will find it there. I come from Bihar and Jharkhand. When I was growing up in the 80s, seedha palla was de rigueur in Bihar especially for puja, parab-tyohaar, baraat-shaadi and any other special occasions. It is still worn by my mother's generation, though it started being seen more as a backward and "ganwaar" day-to-day dress from the 1990s. It is back in fashion, now, although not in Bihar/Jharkhand where the saree itself is losing ground exponentially. Even today, however, vivaah is with the bride and her mother in a seedha palla saree.

I never met my great- grand-mother, the matriarch of a large brood of children, grand-children and great-grandchildren. Widowed at a young age she ran the family lands, kheti-baari, as we call it, with an iron hand. My childhood memories however, are dominated by a large framed photograph of a stern woman in a white saree, with the pallu drawn seedha down her right shoulder, which my grand father kept in pride of place in the public room of the large house. She would have decimated anyone with foolish ideas about drapery with one glance. And she would have been proud of Darshana Jardosh.