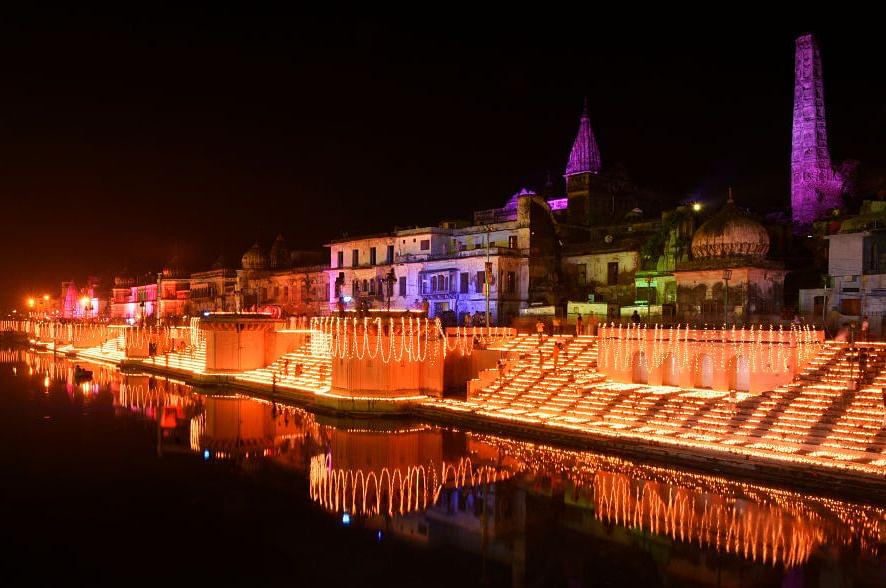 There is a commotion in Ayodhya, again. But this time it’s different from that in the turbulent 1990s. Back then it was about bringing down Babri Masjid, an act of destruction of the structure that was considered a symbol of oppression and slavery. Today, it’s about building and creating.

The aim is to make Deepavali celebration in Ayodhya the grandest in the country. And it seems that this goal has possessed everyone, from officials to workers who have immersed themselves in tasks they have been entrusted to carry out, while the city’s residents wait with baited breath to witness the most dazzling experience of their lives.

“This time it will be bigger and grander than last year’s celebration. Only over 170,000 diyas (earthen lamps) were lit in 2017. It will be double this year. Ayodhya’s Deepavali will become a big affair from now on. People will come from all parts of the country to watch this event,” says a hopeful and excited Ram Swarup Singh, an auto driver ferrying visitors from Deokali Flyover in Faizabad to Ayodhya.

The government had planned to light two lakh diyas, but could manage to place 1.71 lakh only, of which the representatives of the Guinness Book of World Records found that a few thousand could not remain illuminated for the required duration of five minutes.

“On one of the ghats, a laser light show was going on. They were facing a technical glitch. The workers swept that area with a broom and removed the diyas as well. So, our bid failed by a small margin,” says Shailendra Sharma, an associate professor of Avadh University, who has been given the responsibility to clinch the world record this time.

“Around 80 coordinators will be overseeing the lighting of diyas on the 12 ghats of Ram Ki Paidi. Over 4,000 volunteers, including NCC (National Cadet Corps) cadets from colleges, inter-colleges, universities across Uttar Pradesh, have already decorated the ghats with 3.35 lakh diyas. Tomorrow, 1,000 more volunteers will be joining. They will make sure diyas remain illuminated for a long time,” Sharma says.

Over 12,000 litres of oil has been procured and is ready to be put to use today by volunteers. The first diya, a 14-foot one, will be lit by Chief Minister Yogi Adityanath himself. After all the diyas are lit, the Chief Minister, officials, and people of Ayodhya will enjoy a 45-minute digital Ramlila that will be flashed on the water fountain bang in the middle of Ram Ki Paidi, with the help of laser and other lights.

This initiative has given a fillip to the local economy. The responsibility of diyas—from procurement to lighting—has been given to Ram Manohar Lohia Avadh University, which has contracted potters from the surrounding villages of Jaisinghpur, Darshan Nagar, Pura Bazar, Sohawal. Jaisinghnagar potters alone are supplying over two lakh diyas. “There are 35 potter families in the village, and every member of the family—children, women, men, the elderly—worked round the clock to prepare diyas,” says Vinod Prajapati, a potter in Jaisinghpur.

“We got an order of 45,000 diyas. But we are making extra 5,000 diyas, which we will give to organisers as an offering for Bhagwan Ram,” says Jag Ram, a potter of Devai village. Such selfless contribution from poor villagers is a testimony to the spirit of volunteerism that has come to define Deepotsav in the city.

These poor families will get over Rs 4 lakh for their work in the past one month, which is significantly higher than what they usually make. Similarly, around four lakh wicks for diyas are being made by women from self-help groups.

Along with diyas, Ram Ki Paidi is dotted with beautiful rangolis chalked by more than 60 teams from colleges and universities that have come from different parts of the country. Close by, in Ram Katha Park, noted playback singer and Padma Shri awardee Anuradha Paudwal is mesmerising the audience with Ram Vandana, Gayatri Mantra, and other bhajans (songs with religious or spiritual themes).

Just outside the park, around 25 workers are busy making a plaster-of-paris (POP) structure of Hanuman. “It took us three days to make this one. The other big POP statues of Ram and Hanuman at Ram Ki Paidi took us seven days to build,” says Ratnagar Tokre, a designer who has come all the way from Palghar. His other two co-designers are from Nashik. The rest of the helpers are from the city.

The residents of Ayodhya are elated that, finally, this spiritual town is getting its due. “I feel very proud that people from all over the country are coming here for Deepavali. A lot has changed for the city since Yogi-ji came to power last year. First, he converted it from a nagar palika (municipality) to nagar nigam (municipal corporation). Earlier, Ayodhya was just seen as a part of Faizabad, but slowly the former is overshadowing the latter. Hopefully, Yogi-ji will make it into a Janpad (district) soon,” says Sunil Kumar, who drives an Ayodhya Municipal Corporation pickup truck that is working overtime to ensure cleanliness. For Deepotsav preparations , Kumar has to put in two extra hours daily, but he isn’t complaining. “It’s nothing if it helps Ayodhya emerge on the world map and people like you come to visit. The city will benefit,” he adds.

Not everyone sees the upcoming grand celebration in a positive light, though. Janaki Lal Gupta, who makes marble idols of Hindu deities near Hanumangarhi Temple, asks rhetorically, “This is all temporary, isn’t it?”

“Chaar din ki chaandni hai (These are four nights of moonlight). All these contractors have been hired to bring their fancy decoration material, which will be disbanded as soon as the event is over. What is the city getting in the long term?” he asks.

Ram Sharan, 75, a rickshaw puller, sees the Deepotsav celebration as ostentatious. “They have removed all jhuggis (a slum dwelling typically made of mud and corrugated iron) on the Faizabad road right up to Ram Katha Park. How many crores is the government spending on the event? If it had distributed the money to the poor instead, it would have received their blessings. Rather, the police has disbanded their shanties,” he says.

Arvind Maurya, an auto-rickshaw driver, differs. “Everyone lights a diya in his or her home. This is Ram’s city. It’s not that big a deal. Ram ki nagari mein itna to hona he chahiye (At least this much is justified in Ram’s town),” he says. On the money spent on the event, Maurya says, “When the government is spending (Rs) 50 crore, what’s an extra (Rs) 2 crore? This will help the city in getting tourism. Won’t the poor like me benefit from this?” he asks.

Barring a few exceptions, most of Ayodhya’s residents consider the current political dispensation in Lucknow as well-intentioned. Chief Minister Adityanath has visited the city seven times since he assumed office in March last year. The government is laying a strong emphasis on ensuring sanitation and improving power.

The government is carrying out a lot of work. It is building facilities at the Ram Katha Gallery, constructing a multipurpose hall at Digambar Akhada, landscaping and developing Guptar Ghat and Laxman Kila Ghat, installing solar lighting at five ghats and many other places in the city, developing drainage as well as a solid waste management system, developing streets from Chowk Ayodhya Road to Hanuman Garhi, Kanak Bhawan, and Dashrath Bhawan for pedestrians, and much more.

Monu Gupta, a shopkeeper near Ram Ghat, says the power situation has improved, thanks to underground laying of cables. “The situation is still not ideal, but things are improving. On the cleanliness front, a drastic change has happened, but a lot needs to be done.”

Rishikesh Upadhyay, the first Mayor of Ayodhya, told Swarajya that there is a special focus on cleanliness. “Chief Minister Shri Yogi Adityanath-ji declared Ayodhya a municipal corporation. Under his and Prime Minister Narendra Modi’s guidance, we want to make the city swacch (clean) and smart.” The corporation also helped organise the Ayodhya Arts Festival last month. The curator of the festival, Shantanu Gupta, who is in the city for Deepotsav, told Swarajya, “Chief Minister Yogi Adityanath has returned the honour, the grandeur, and the respect that city of Ayodhya deserved for so long. It will give a huge boost to tourism in the region.”

Uttar Pradesh Chief Minister is welcoming South Korean First Lady in Ayodhya today (6 November). Around 15 groups of artists from various parts of the country and abroad will carry out a shobhayatra from Saket College to Ram Katha Park, depicting the arrival of Shri Ram to Ayodhya after 14 years of exile. Artists in the shobhayatra will perform different acts of Ramlila in a series of tableaux that will travel over three kilometres. Around 150 artists are taking part, half of whom are foreigners. Artists from Laos, South Korea, Cambodia, and Russia will be leading the procession. These artists have been performing Ramlila at Awadh University for the last couple of days.

In the evening, the Chief Minister will do a symbolic rajyaabhishek (coronation) of the artist dressed as Ram after he lands with other artists, who will be playing the roles of Sita and Hanuman, from a helicopter, symbolic of the pushpak viman. South Korea’s First Lady and the Chief Minister will lay the foundation stone for building an extension of a memorial to Queen Heo. It is believed that Heo was Ayodhya’s princess, who went to South Korea and married the prince. A substantial number of Koreans, including the ruling President and the First Lady, believe they are the legendary queen’s descendants. Chief Minister Adityanath will participate in the Maha Aarti at Saryu Ghat, which will be conducted by Mahant Sashikant Das, who performs the daily aarti with 1,051 diyas.

Baba Govinddas, sitting on bank of the river Saryu, is all praise for the Chief Minister. “How many CMs (chief ministers) came before Yogi? No one cared for the city. They didn’t even visit Ayodhya. Wo apne he raj-kaaj mein simte rahe (They remained enveloped in their world of politics). Now, Yogi is transforming Ram’s city, starting with the Deepotsav,” he says.

Also Read: All That You Wanted To Know About Princess Suriratna – The Korean Queen Whose Legacy Is Being Celebrated By Adityanath Today