Hurt By Neglect, Devotees Come Together To Celebrate Their Temple 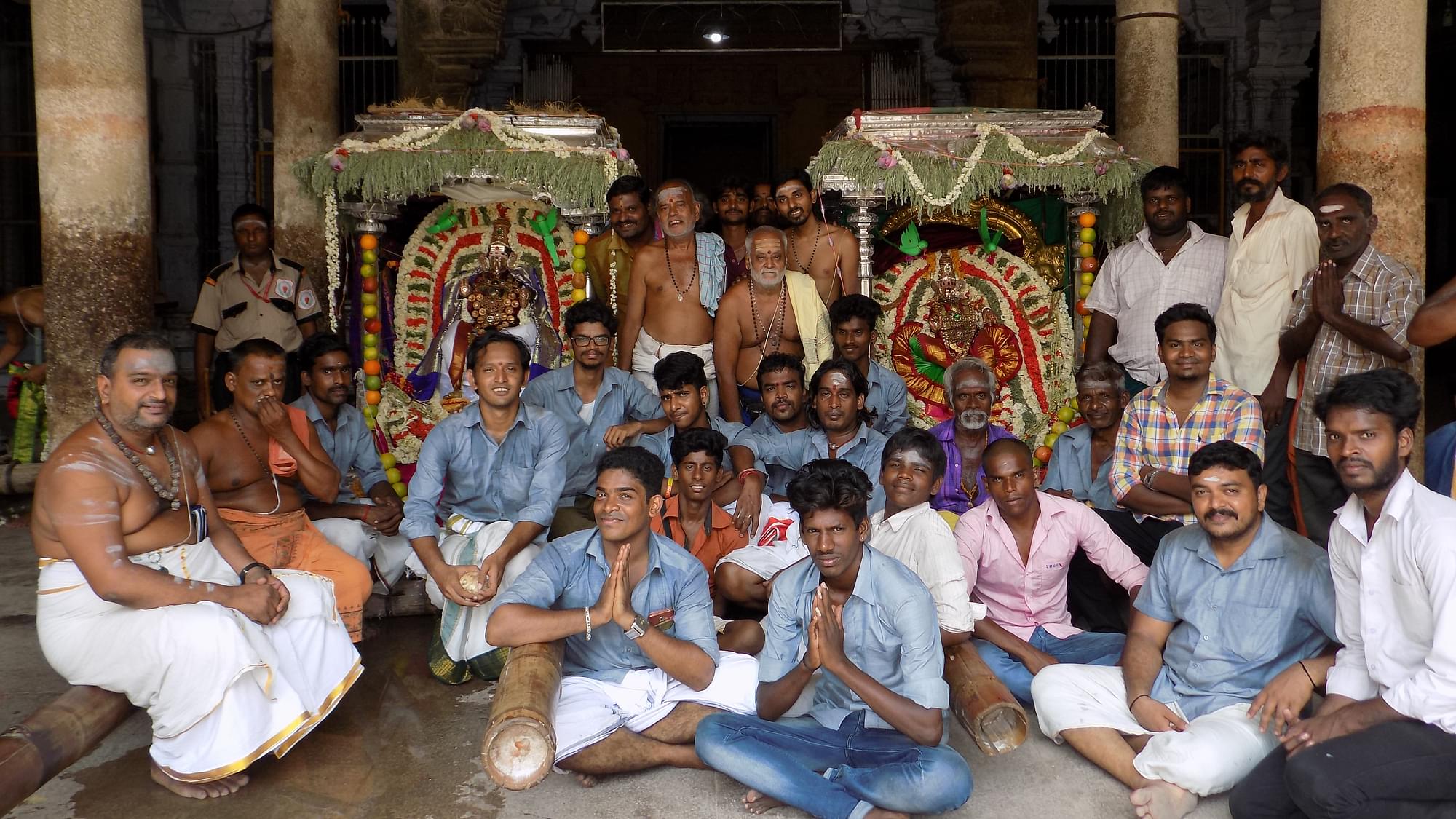 A committed group of temple enthusiasts offers a lesson in reclaiming a temple.

In a tiny suburb of Tiruchirappalli, adjacent to the island of Srirangam, which hosts the famous Sri Ranganathaswamy Temple, stand the majestic shrines of Jambukeshwara and Akhilandeshwari in the Thiruvanaikaval Temple.

Among the many splendid structures that dot Tamil Nadu state, and a fine example of the fruits of royal patronage, Tiruvanaika, as it is also called, was built by Kocengannan, a Chola king, and is among the five elemental temple spaces, representing water.

If you don’t know about the temple, the chances of you landing there even while visiting nearby Srirangam, are small, since this temple is not as famous as the island temple. This was precisely what led a group of young people, who feel a deep connection to this shrine, to take it upon themselves to ensure that this royal sanctuary of art, divinity, and history gets its due.

I was ignorant about the shrine too, when I registered for the Srirangam trip organised by RATHAM, whose efforts I last wrote about. But now I write this story so that any temple can take inspiration and replicate the efforts of this group in giving a temple the attention it deserves.

Once you enter the shrine, the temple elephant Akhila, who stands there in all her majesty, immediately catches your attention. But so large are the mandapams, and such ornate the work, that the elephant appears tiny. But not tiny enough to be able to enter the central shrine, whose design is that way on purpose, if you believe the sthalapurana or the myth of the land.

As an elemental shrine (panchatatva sthanam) representing water, the sanctum sanctorum, which one has to enter ducking and staying low, is perennially moist as the water around the main deity, although minimal when we visited, rises above it during the monsoon.

As we looked around the temple, and as architect and conservationist Madhusudhanan Kalaichelvan took us on tour of the various inscriptions and a door that was apparently opened after decades to the sight of some vahanams (traditional vehicles of the deity), he introduced us to the person under whose supervision both the vahanams and inscriptions were now being worked on. Sudharshan, a research scholar at Annamalai University, was part of this group who were rendering services to the temple in a bid to conserve it, preserve its antiquity, and also popularise it.

Sudharshan, who was involved as a lay devotee at the Srirangam Temple, met Santosh around eight years ago, when Santosh invited him to be part of this group. Sudharshan joined them for the Shree Padam services they were rendering at the Jambukeshwara temple shrine.

Shree padathanagis or bearers of the Lord’s feet are those that offer the service of carrying the deity seated on the vahanam (vehicle) during the utsavas (ceremonial processions). This is another unique aspect of this temple as it has no restrictions like in other prominent shrines, which permit only people belonging to a particular caste or community to carry the idols (Iyers in Vaishnavite shrines and Brahmins in Shaivite shrines, for instance).

“Swamy knows and seeks only devotion. Which is why anyone can volunteer to offer this seva here,” says a gleaming Santosh, who spearheads this young group. Moreover, in today’s times, when there are few people ready to volunteer in temples or devote time to temple activities, restrictions are certainly not the way forward, he explains. “Only if we rise beyond our differences and join hands can we revive our temples, our culture,” he says.

Santosh’s childhood was spent around the temple and what began as a simple act of volunteering is now the epicentre of his life. An assistant manager at a bank and currently posted in Puducherry, Santosh visits Tiruvanaika on every important occasion, which happens to be “almost every alternate week as we have functions almost all 12 months of the year”, he says, adding that “all else including our respective careers comes second, the temple comes first”.

The group, only three of whom, including Santosh and Sudharshan, are graduates, have so far refurbished six vahanams at a cost of around Rs 6.5 lakh, every penny collected from the households in the temple town.

There is nothing that this group seeks in return and almost next to nothing that they get as government reimbursement for the services rendered. And even that small sum they receive is invested by these folks in either buying things for the temple or pooling it to raise funds. “Around 50 rupees or so is the contract payment for one session of service rendered. But since that is not why we are here, we offer it back to the temple,” Sudharshan tells me.

Whether it’s cleaning the temple, decorating it for various utsavams, or carrying the deity on their shoulders for hours, they find nothing but joy in their work.

“Every time I am in town, we meet up and have a meal together to ensure we all are motivated and continue our work with equal zest,” says an excited Santosh, whose efforts for over a decade and a half have begun to pay off.

“I was doing the groundwork, but once Sudharshan was on board, we went digital,” Santosh tells me. They decided that if they had to bring people to the temple, they would have to take the temple to the people. So while Santosh had been popularising the temple ceremonies and functions by sharing posters and pamphlets and going door to door inviting people, Sudharshan, who is pursuing his PhD in computer science, said it was time to take the temple to the people. So in 2015, they started a Facebook page, and Ram Kumar, another team member and an archaka (priest) at the temple, started updating pictures of various ceremonies religiously. “Regular updates every day were posted with images, and people from all over the world began to join the page, and in a matter of three to four years now we have around 50,000 to 1 lakh followers”, he says, delighted at the way in which their efforts are bearing fruit.

Their efforts, they are glad to acknowledge, are paying off, even if that means they no longer get exclusive darshans of the deity. “There were days earlier when I would be holding the ceremonial lamp, and there would hardly be four to five people in the sanctum, and we would walk out of the Akhilandeshwari shrine chitchatting. But now, on certain days, I myself have to wait for an hour to get Akhilandeshwari’s darshan,” he quips, unaffected.

The Thiruvanaikaval Temple, like most others, is under the administration of the Hindu Religious and Charitable Endowments department, but that hasn’t stopped the young men from participating actively in its functioning. On the contrary, their work is a demonstration of how participation is key to any democratic setup operating at an optimum level. Having been associated with it since childhood, and seeking no monetary compensation of any sort of reward, the only motto being the welfare of the temple, the group receives cooperation from the authorities too.

And the group’s involvement is not just appreciated but also invited. “Even with the ongoing renovation work, whenever we have found something that has not been created true to either the temple history or the aesthetics, we have always brought it up, and the authorities have welcomed our suggestions,” explains Sudharshan, whose efforts have also resulted in the documentation of temple inscriptions.

Having stumbled on quite a few of the scattered inscriptions, Sudharshan involved Kalaichelvan and conducted an estampage workshop to read and document as many inscriptions as they can lay their hands on. The group participated in the workshop, spending two days documenting the footprints of history. The inscriptions have been decoded and are now in the process of being compiled into a book, which they hope will be completed and released around the time of the Kumbhabhishekam due by year-end.

They also take cognisance of any repair or maintenance work that the procession deities may require, contact the concerned sthapathis (temple architect), make recommendations to the authorities and, once permitted, raise funds for the same. Many sculptures that were found strewn around the temple premises, it is hoped, will be housed in a museum that the temple will host there. “We will do whatever it takes to get the temple its due fame,” says the group.

Where there is a will…

This is just a few devotees who wish that the temple be visited more, that its grandeur be experienced by more people, and that its beauty touches as many hearts as possible. Today the temple is seeing footfalls rise, funds pour in, and a lot of work being done consistently. Surely, this can serve as an example and help revive many of our temples that are not in the condition necessary to survive the passage of time.