Immortalised In Stone: Revisiting The Ancient City Of Amaravati Through Sculptures Of The Era 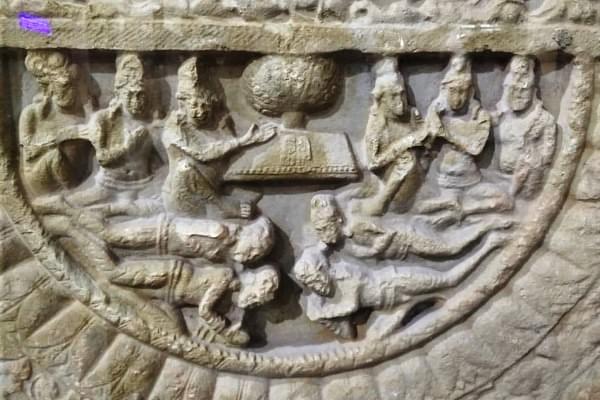 Amaravati, now a small town near Guntur, in Andhra, was once the capital of the Ikhsvaku and Pallava kingdoms. It may earlier have been a regional capital of their predecessors, the Satavahanas or Andhras, and historians think it was an ancient city called Dhanyakataka.

History of the Sculptures

Amaravati is historically important because it is the oldest surviving art in the medium of stone, of the historical period, in the southern part of the peninsula. There are some cave paintings by pre-historic people which are older. But very little art of settled communities of the Sangam age in Tamil Nadu or its equivalent age in south India survive, except a few scattered items of pottery.

Most of the art of this period must have been of brick, clay, wood, or on clothe, and none of it has survived the vagaries of time.

Even this earliest attempt is astounding for its creativity, in theme, composition, and sensitivity. The art exhibits a classicism that continues on into the age of the Pallavas in the south.

The stupa had a glorious age of about four centuries under the Satavahanas and their feudatories. Art historians classify its sculptures as belonging to four different eras stylistically, and two periods, based on the philosophy of the dominant sects of Buddhism. Sculptures of the earliest era were governed by the Theravada sect, which forbade the depiction of Buddha in human form. He was instead represented by the Bodhi tree, a throne, his footwear, a stupa, or a Dharmachakra, and we see scenes of devotees offering worship to these objects.

In the later Mahayana period, Buddha is seen in human form, tales of his life including birth, life in the palace, renunciation, miracles, sermonising, and Mahaparinirvana (his death) are depicted. This period also saw the extensive depiction of jatakas, the tales of Bodhisattvas; that is, the previous lives of the Buddha.

Buddhism declined with the rise of the Shaiva and Vaishnava Bhakti movements in south India, and Amaravati was abandoned as a capital and a city in some unknown period. It was rediscovered in 1797 by Major Colin Mackenzie, of the East India Company’s army. Over the next hundred years, several excavations by various archaeologists followed. Most of the sculptures were transported to Machilipatnam, and thence to Madras and London for safekeeping and study.

Uniqueness of the Art

In the Amaravati panels, we see the greatest efflorescence of Buddhist art in the medium of stone. The space of the sculptures is governed by the architectural elements of the stupa that were decorated. The stupa itself is made of bricks, arranged in a large cylindrical dome. The lower walls of the dome and the railing were built with limestone panels and consisted of rectangular pieces, circular medallions, vertical pillar slabs, and free standing sculptures.

There are jatakas that are narrated here which have not been handled elsewhere, like Ajanta or Sanchi.

As Swaminathan says, “The quintessence of Amaravati art is subtle suggestion, and emphasis through contrast, in depicting the fight of conscience against sin, in showing in the same frame a king who becomes a monk, almost in sutra form.”

Some of the stories are hackneyed, and lack depth or complexity, but the artistic manner of their narration is exquisite. Let us look at a few.

Upon Buddha’s death, called the Mahaparinirvana, the celestials themselves descended to Earth to transport the one object that marked him as a bhikshu – his begging bowl, to the heavens, and give it a deserving honoured place. This simple vessel, revered and treasured, was accorded greater respect than a king’s chariot would receive on a tour of his capital.

Sivaramamurthi describes this riotous celebration as the ‘Chaos of Joy’. This is depicted in a medallion sculpture, less than 3 ft across, with the begging bowl as the centre piece, carried heavenwards by forty celestials. What motivated the artist to pack 40 people in such a little space, all facing the bowl on its ascent, from every conceivable angle, posture? They are all flying, depicted not by flapping wings, but by natural ease, as though swimming upwards in the air. Two ladies float above, welcoming with garlands. Everyone is clothed, jewelled with anklets and bracelets, and turbans or coiffures, a veritable buffet of ornamentation for the connoisseur.

Any one of these poses might seem awkward or uncomfortable individually, but collectively produce a balance that seems concordant and intuitive. And therein lies the artist’s genius!

The begging bowl shows a single episode. The Mandhata jataka shows the story of Mandhata, the chakravarti, the ideal monarch, seated on his throne under a Parijata tree.

Bordered square panels, three below, three above this central scene, depict different stages of his rise and fall; as a king, as a chakravarti with his emblems, the futile efforts of nagas and rishis to stop his ascent to heaven, the ascent itself, and Mandhata sharing the simhasana of Indra. The last panel is unrecognisably damaged.

The partitioning of the scenes is simple, but the renderings animated. The central scene is reminiscent of the begging bowl, in postures and angles of the supplicants, while Mandhata poses in regal splendour, the cynosure of attention.

Shaddanta Jataka, the story of a Bodhisattva as this eponymous elephant, with six tusks, crowds seven scenes into the same space as the begging bowl. There are no artificial divisions here, the scenes meld into each other seamlessly.

The lowest scene shows Shaddanta sporting with his queen elephants, but offering a lotus to his favorite, Mahasubaddha, which enrages his other queen, Chullasubbadha, who leaves the forest (shown above, to its left). Reborn as the queen of Varanasi, Chullasubbadha announces an award to whomever can bring the six tusks of Shaddanta. A hunter, Sonuttara, who was once rescued by Shaddanta, greedy for the reward, ungratefully seeks Shaddanta. Being noble and generous, as is befitting a Bodhisattva, Shaddanta allows Sonuttara to saw off his tusks, (centre), but when he can’t, pulls them out himself (to its right).

Finally, Sonuttara leaves the forest carrying the tusks (top, centre). Not shown is the Chullasubaddha in the palace, fainting in regret and anguish at her cruel desire when she sees the sawn-off tusks.

While the story is trite, the division of space and rendering of scenes are masterly – “narrating a long tale in a short compass.”

Each sculpture shows some such special feature, a different way of thinking, an inventiveness of an artistic language, that inspired generations that followed.

There are several donor inscriptions in the panels, mostly by merchants and other commoners. These are in the Prakrit language, in the Brahmi script, similar to the edicts of Samrat Asoka.

Life of the Amaravati Era

Sivaramamurthi pays a tribute to the sculptors of Amaravati, lyrical in prose, and insightful in description.

“Nature revealed herself to the Amaravati artist, he writes, her most fascinating phases and he has not in vain studied her charming aspects and moods.

“He was as much peasant at heart as courtier in his taste. He knew the simple life of the poor, and grandeur of the court. His chisel carved thatched hut with sympathy, mighty palace and city gateway with awe, monasteries with love and reverence.

“Life was full of throbbing interest, for these masters, and they studied it closely. The life of the period was rich. Every item of daily life life was governed by aesthetics and the artists transferred these to imperishable forms on marble.

We thus know of the life of the age in all its details : the dress they wore, the ornaments they loved, the furniture they used, the houses they occupied, the courtesies they observed, the battles they fought. In fact, the life they lived.”