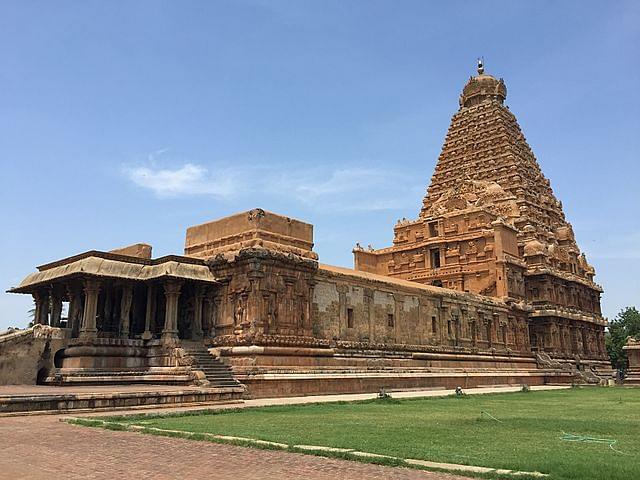 Ancient Indian temples are some of the greatest artistic achievements of mankind, celebrated the world over, but not enough has been done to understand their history.

Searching through the uncertainty and confusion of the present, knowledge of the past provides illumination, which is why history is important. We not only need the history of kings but also of education, and of art and architecture.

In recent years, textbooks have created a false picture of how education worked before the arrival of the British, and it was accepted that Indians had been largely illiterate. This changed when Dharampal (1922-2006) wrote The Beautiful Tree, which, using British documents from the early 1800s, showed that pre-British education was fairly universal, indeed more so than what Europe had in that period.

Dharampal explains that the temple and the mosque of each village had a school attached to it and the children of all communities attended these schools. In addition, rich temples had academies where more advanced subjects were taught.

The archaeologist, R. Nagaswamy, has provided evidence of advanced higher education during an even earlier period. He has written on 10th century inscriptions on the walls of the Sundaravarada Temple at Uttiramerur in Kanchipuram district that describe the administration of the local assembly and governance of school and college. This temple was built around 750 CE in the Pallava rule, with subsequent renovations by Rajendra Chola in 1013 CE, and the Vijayanagar Emperor, Krishnadevaraya, in 1520 CE.

The description of the Vedic college’s administration includes the qualifications one needed to become a teacher. For the sake of better governance, and presumably to eliminate nepotism, it was stipulated that the teacher could not be a native of the village.

The teacher was required to have studied at least one Veda, in addition to mastery of grammar and various darśanas, logic, and etymology. The teacher was also supposed to know mathematics and astronomy-astrology.

It is an interesting sidelight that the teacher was initially appointed for a period of three years, at the end of which it was assessed if another term of appointment was warranted. This matches how university appointments are made in our times. The endowment for the teacher was created by individuals in the village and was administered by the village assembly.

When the British arrived, their education officers estimated there were 100,000 schools in Bengal alone, that is one school for about 500 pupils, and the figures were similar in other provinces. These numbers indicate that the literary rate was perhaps 50 percent, if not higher. At the end of the British Rule the rate had declined to about 12 percent, paralleling the pauperization that occurred in India during this rule.

The British education officers were aware that their policies were leading to the destruction of indigenous education in the country. For the British, education was just a means for creating an intermediate class of English-education Indians that would assist them in the governance of the rest of the population. Dharampal quotes a contemporary document that explains the process:

Fees were raised to a degree, which, considering the circumstances of the classes that resort to schools, were abnormal. When it was objected that minimum fee would be a great hardship to poor students, the answer was such students had no business to receive that kind of education… Primary education for the masses, and higher education for the higher classes are discouraged for political reasons.

The British did something similar for irrigation by replacing the system of local canals and ponds, whose upkeep was the responsibility of the area villages and towns, by larger canals whose water could be controlled by them. The local systems fell into disuse, the ponds silted up, and this was a contributory cause of the horrific famines that hit India in the 19th century. The traditional system of governance of the irrigation system is also described in the Sundaravarada Temple inscription.

The education system that the British fostered ended up erasing the collective Indian memory of scientific and social processes. It is not surprising that westernized Indians think that the British system of education, and the English language, is a gift for which India should forever be grateful.

Let’s imagine what might have been if the Indian system had been allowed to evolve. Just as some of the great American universities are run by Christian Churches — as in Duke, Georgetown, Baylor, and Notre Dame – rich Indian temples might have created their own universities. The British ensured that this did not happen by confiscating lands and properties of the temples by the infamous Religious Endowment Acts of 1863 and 1926. Further draconian laws to control temples have been enacted since 1951.

Can temples still play a role in universal education? It appears not, as long as they are governed and administered by the government. Thoughtful Westerners think that it is disgraceful that Indian temples are run by the state.

The reason normally given by the government for takeover of temple administration is to improve its management, but in reality the temples are used as a cash cow. Temple properties have been sold and usurped; there is little oversight and much corruption. In any event, the temple funds are not being used for the larger good of the tradition.

Freeing of the temples was one of the issues before the general elections of 2014 that the BJP used against the Congress party. But although the BJP won, nothing has been done to this end, proving the dictum that no one wishes to give up power.

From an administrative point of view, running temples is the worst thing a government ought to be doing. Shouldn’t it be more worried about the epidemic of farmer suicides, lack of basic civic amenities and grinding poverty in vast regions of the country?

My personal wish is that good people would come up with model legislation for local temple governance, and one hopes that this will include creation of colleges and universities, wherever applicable. Once adopted in one state, it is likely to create momentum for adoption in other states.

From the point of view of history, ancient Indian temples are some of the greatest artistic achievements of mankind, celebrated the world over, but not enough has been done to understand their history and how that fits into the larger context of Indian culture. This is so because the current temple managements have neither the vision nor the agency to do this.

The evolution of the temple architecture is a fascinating chapter in the history of ideas. One of the most exciting things that I did in my own scholarly life was to discover the connection between the Agnicayana ritual of the Vedic times and the later design of the temple. I was also fortunate to discover overlooked connections between the great Prambanan temple of Java, Indonesia and certain tantric ideas that were then current in India.

According to the art historian Susan Huntington, Indian rock-cut and freestanding temples reveal “to the viewer not only insights into his own position in the universe, but into the workings of the cosmos as well.” She adds that the Brhadeśvara Temple at Tanjore would be on size alone “among the foremost architectural creations in the world prior to the twentieth century.” This temple built in 1010 CE by Emperor Raja Raja Chola was both an engineering and artistic triumph.

If Indian culture is to find its natural place in world processes, temples need to be freed of government control. This will facilitate the development of temple universities devoted not only to artistic and religious traditions of India but also to contemporary problems of science, technology, and society.