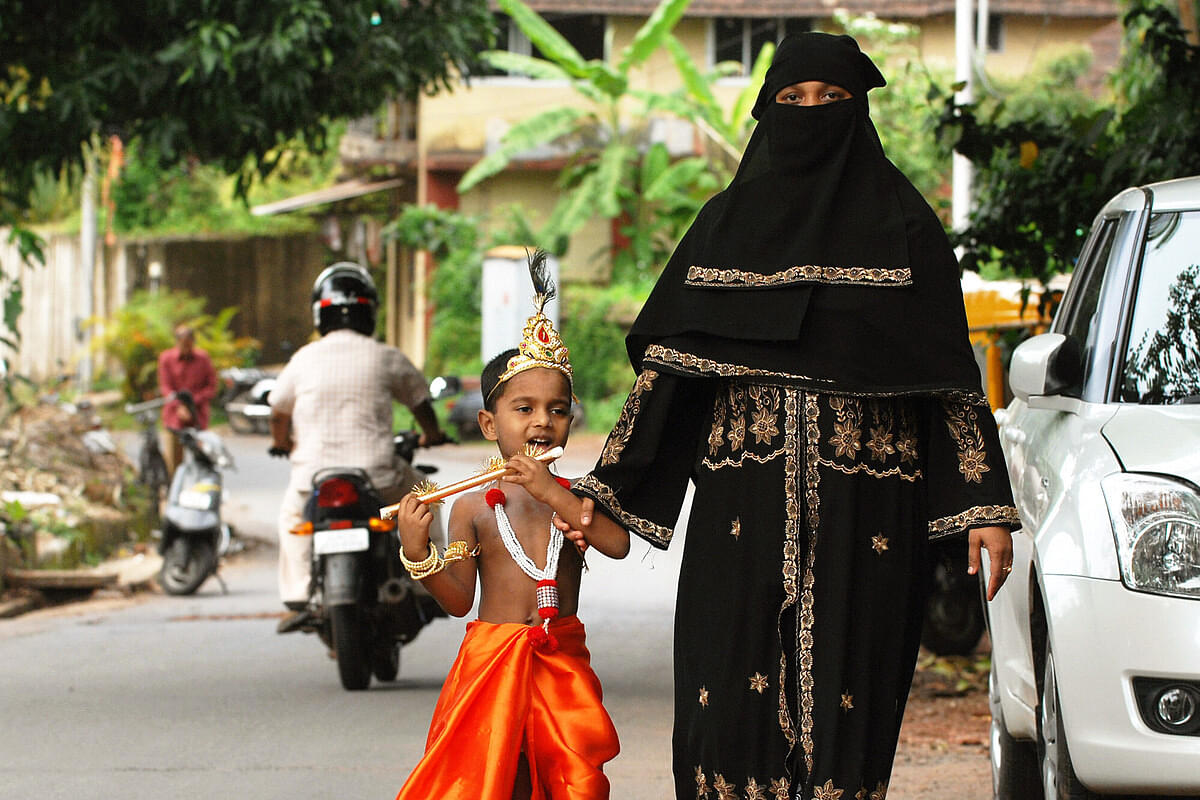 Muslim woman with her son dressed as Krishna (Rajtilak Naik/Flickr)

Come Krishna Janmashtami, and we see photos of veil-clad Muslim women with their children dressed up as little Krishna circulating on social media.

Some discredit the whole exercise as a sham — a kind of Gandhian opiate to keep gullible Hindus blinded from the real danger of radical jihadism.

Of course, the violent and murderous attacks on Hindus have increased.

Individual executions and terror killings seem to be the favoured ways of the Islamic radical groups now.

Obviously, Hindus being the last standing pagan people in the world cannot let their guard down.

But it will be unfair to dismiss the entire phenomenon as a sham. There is a genuine civilisational process happening here, and it is important we acknowledge and understand it.

It is undeniable that monopolistic, exclusivist and expansionist religions have an agenda of conversions. A significant section of them are involved in a concerted campaign to convert Hindus.

The conversion happens through coercion or fraudulent means or through supremacist propaganda that devalues one religion and elevates another.

Conversion is based on violence, as famously said by Swami Dayananda Saraswati, echoing the thoughts of Mahatma Gandhi, who too considered conversion against the principle of both 'ahimsa' and 'swadeshi'.

Conversion involves money power, political power, insinuations and perpetuating stereotypes and prejudices against another religion. It starts with psychological violence and ends with genocidal violence.

And importantly, its results are fast and hence dangerous.

Even an exclusivist, expansionist, monopolistic religion, given a long period of time, gets transformed in its core for the better and for the betterment of its own adherents.

But they transformed the nature of Islam. Parveen Sultana shows the world that one can sing beautiful bhajans to goddesses and still be a Muslim.

Abdul Kalam showed the world that a very devout Muslim who performed his namaz five times a day could also lead the university students to sing Saraswati Vandana.

The recent pictures on social media of prominent Bollywood personalities, though not in the least in this league, still represent, for sham or out of sincerity, this civilisational transformation.

They are telling the world that a Muslim can install the idol of Ganesh in their house and worship him.

One should remember that this did not happen even with Christianity, with which Islam shares a memetic kernel to a significant extent.

A Muslim has never seen Jesus as the earthly descent of Allah — at best he is a messenger. But Ganesh when worshipped is always worshipped as the manifestation of the highest divine.

And in India, even prominent Muslims in public life show, that they can worship such a form of the highest divine and yet they can also be Muslims, devout good Muslims.

This is Islam transforming. This is silent and steady. This is not fast and flashy. But this happens.

When Gandhi asked Hindus and Muslims to sing Ishwar Allah Tere Naam, he was trying to accelerate this civilisational process.

When a person belonging to an expansionist exclusivist monopolistic religion sings this line, it is an acknowledgement of the validity of theo-diversity.

Perhaps, one person who understood this aspect of Gandhi more than many Hindus was Jinnah. With his characteristic notoriety, when he said that ultimately the aim of Hindu Maha Sabha and that of Gandhi were the same — he, in a way, meant this.

That this transformational process is happening does not in any way obliterate the dangers of the war of proselytisation waged on the Dharmic family of religions in India.

It is very much there and is also increasing disproportionately to the transformation that is happening.

But we have to understand this strength of India — the civilisational and spiritual change that it is effecting on monopolistic religions by appealing to the spontaneous spiritual goodness of human hearts. We need to fortify that. We need to create an environment which can facilitate that change naturally faster.