Is It The Job Of The State Of Kerala To Hurt Sentiments Of Hindu Devotees? The Centre Must Intervene In Sabarimala 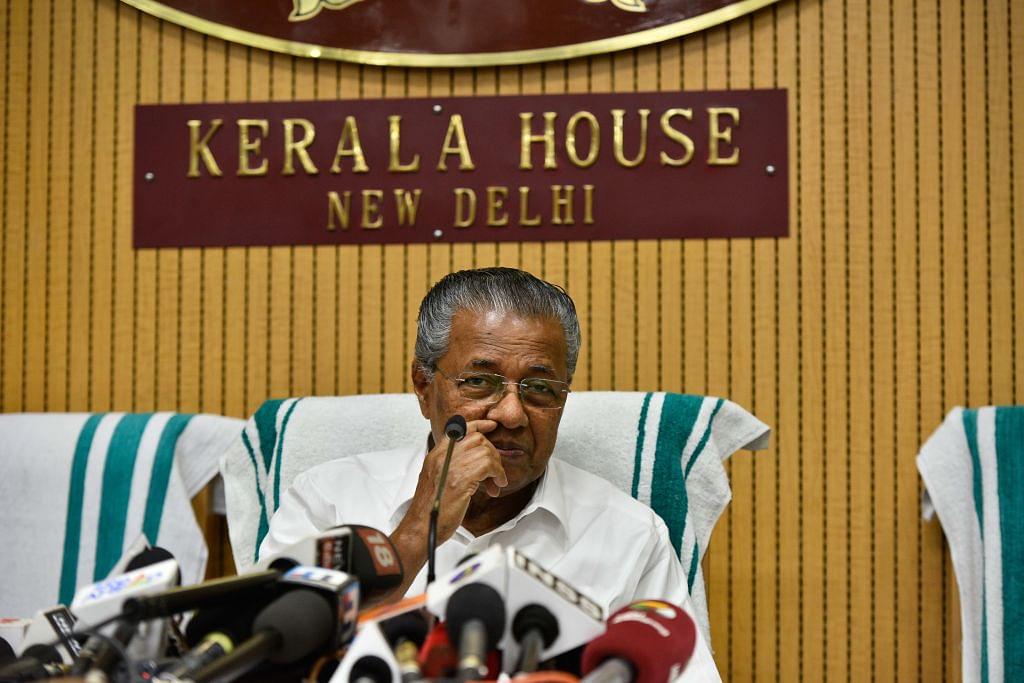 Thousands of Hindu women devotees marched in Kerala, chanting Swamiye Saranam Ayyappa, to protest against the interference of the ‘colonial court’ in their traditions. The court with the same 'civilising' mindset as our erstwhile colonialists, was unmoved, and then the totalitarian communist administration of Kerala jumped in. Police in riot gear pummelled peaceful protesters and the entire power of the state has been deployed to force the entry of a few women into Sabarimala.

Who were these women? Were they devotees of Ayyappa, who had been longing to pray at the temple? There is Rehana Fathima, a Muslim activist, who on social media displayed her contempt for Hindu symbols. Her motivation was not devotion but government support. She was later expelled from the Muslim community for her intention to hurt the sentiments of Hindu devotees.

Another was the Christian Mary Sweety, again no great Ayyappa devotee, who allegedly refused to even chant Swamiye Saranam Ayyappa on being asked. Are these the characteristics of devotees — or are these the symptoms of those who hate the Sabarimala Temple and only wish to desecrate it? Thousands of police personnel have been deployed by the state to ensure the entry of a few women, trampling over the devotions of lakhs of women devotees. What is this “right to pray” that the court is hell-bent on giving and the police state is determined to enforce?

Padma Pillai is a Keralite and an entrepreneur, who runs a marketing firm, employing more than 200 people. She is an epitome of women’s empowerment and has been one of the leaders of the #ReadyToWait movement, which supports the restrictions on women from a certain age group entering the Sabarimala shrine. According to her “even before 1991, when the court passed an order requiring the police to enforce non-entry of women of an age-group into Sabarimala, such women devotees were not going to the temple. It is an age-old tradition followed by the devotees respecting the brahmacharya form of Lord Ayyappa. It is part of the devotion to Ayyappa that women wait.”

But the colonial state sees its job not in representing the people but in fixing them. If the Sabarimala case was even remotely about the right to pray, thousands of women devotees would be on the streets demanding that right just as, for instance, hundreds of gay activists marched for removal of section 377.

However, Sabarimala is not a civil rights issue. It is a case of sacred, not a civil, site. Going to a particular temple to pray only matters to those who believe in the temple and its maryada, its particular legend. No women devotees are marching to enter Sabarimala. So the court judgement is not for a “right to pray” for devotees — logically the only group, who would be interested in praying to Ayyappa. Rather it is to create the right to desecrate for non-devotees, those who do not believe in Sabarimala at all. The agenda is entirely different. The communist government of Kerala has arrested hundreds of Hindu women devotees, presumably because they are not grateful enough to have received “the right to pray”. It is hard to find a greater example of overbearing colonial patriarchy.

What is the nature of the hurt that Hindu women devotees feel about the state interfering in Sabarimala traditions? As Padma Pillai says, “my mother is now 73. She waited till she was 53 years. The actions of the state are deeply hurtful to her and she, even in her frail state, wanted to go and prevent the desecration of the shrine by non-devotees.”

The Ayyappa tradition is also highly supportive of women, which is why thousands and thousands of women are out on the streets against the court intervention. The menfolk, who undergo the pilgrimage to Sabarimala take on many restrictions which are beneficial to the society as a whole. Pillai mentioned that “the men also observe brahmacharya and give up habits like drinking. They address all women as mother. Entire villages are benefited by the Ayyappa vows of the men. Women folk feel that if the traditions of Sabarimala are diluted, men too will also not take their vows seriously.” From a penance, the state is determined to turn Sabarimala into a picnic riding roughshod on the sentiments.

Given the strong sentiment of the Hindu women devotees why is the state hell-bent on violating the traditions? Article 295A states that anyone who willfully injures sentiments would be subject to prosecution. Hundreds of thousands of devotees are aggrieved and hurt by this judgement. Just because a court has ruled that women between ages 10-50 are not banned from entering Sabarimala does not mean that the state needs to employ thousands of police in riot gear to force the entry of non-devotee women who are going there with the express intention of violating the sentiments of devotees. As a hypothetical example, there is no ban on burning of the Quran. But, if someone were to do so, the state would arrest them under 295A for injuring sentiments.

Just because something is not banned does not mean that it is the job of the state to facilitate its happening. The temple can be self-policed, just as it was before 1991. Why is the state hell-bent on ensuring the desecration of the temple unless the agenda is not “right to pray” but to break the faith of the Sabarimala Temple tradition of lakhs and lakhs of devotees. As Pillai says “not even a single devotee woman will go”.

This is a colonial civilising mission in overdrive. The ‘Jallianwalla Bagh state’ deploys riot police to ensure, what in the sentiments of the devotees, is the abject desecration of their shrine. Shouldn’t the government of Kerala arrest itself under section 295A for hurting sentiments? And if it is unwilling to do so, isn’t it time for the central government to intervene to protect religious freedom?