Kolkata Needs No Patron Saint, Especially One Associated With Genocide 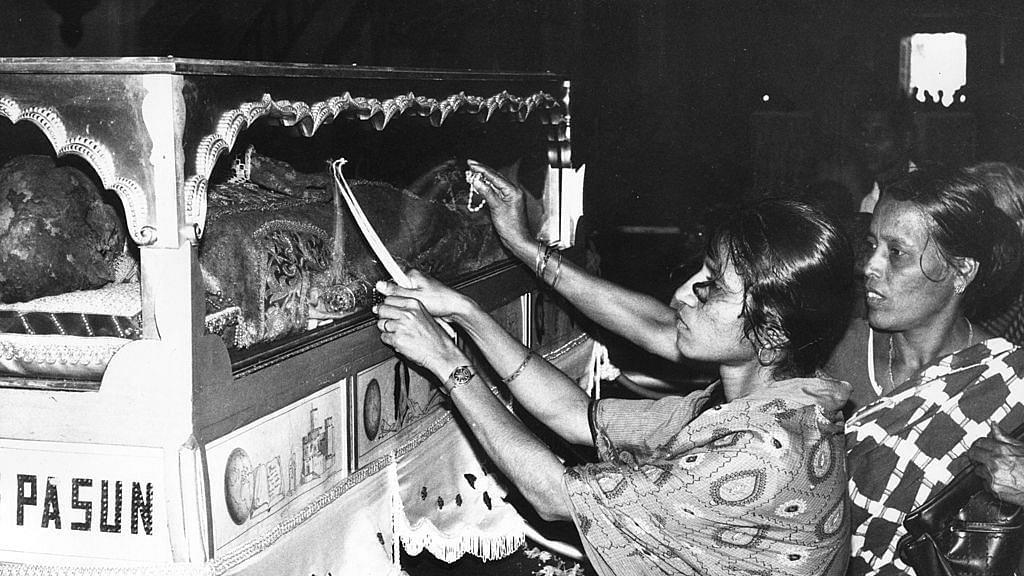 The first in a long line of pilgrims raising candles to the glass tomb cover of St Francis Xavier in the Basilica of Dom Jesus, Goa, India. (David Warren Dorset/Keystone Features/Getty Images)

Earlier this month, Mother Teresa, who had attracted considerable criticism during her lifetime and controversies after her death over ‘miracle cures’ attributed to her, was declared a ‘patron saint’ of Kolkata. The occasion was the first anniversary of her canonisation by Pope Francis at the Vatican last year.

At the ceremony to mark the first anniversary of Albanian nun being declared a ‘saint’ by the Vatican, the vicar general of Kolkata’s archdiocese read out a decree making Teresa a patron saint. Kolkata archbishop Thomas D’Souza and Vatican’s ambassador to India Reverend Giambattista Diquattro were present when the announcement was made.

And, in that ceremony, it was also revealed that ‘saint’ Francis Xavier, co-founder of the Society of Jesus, has been the patron saint of Kolkata ever since the Kolkata archdiocese was set up in 1876. Xavier has many educational institutions, including a school and college in the city, named after him.

Kolkata has been associated with many religious figures, the foremost among them being Sri Chaitanya Mahaprabhu, Ramakrishna Paramahansa, Swami Vivekananda, Rishi Aurobindo, Maharishi Debendranath Tagore and Raja Ram Mohan Roy. Their contributions to the society need no mention. But no Vaishnavite organisation (the ISKCON, for instance), or the Ramakrishna Mission, the Aurobindo Ashram or the Brahmo Samaj (founded by Raja Ram Mohan Roy and Maharishi Tagore) have ever thought it necessary to appropriate Kolkata and name their founder as ‘patron saint’ of the city.

“Kolkata is a multireligious, multilingual, cosmopolitan city. It is totally inappropriate for the Roman Catholic Church to name Mother Teresa as the patron saint of this city. This is an insidious attempt to appropriate Kolkata’s religious identity and portray to the whole world that Mother Teresa was the only religious figure that this city had. We see in this a very sinister design and read it as a sign of aggressive evangelism by the Catholic Church,” said Vishwa Hindu Parishad leader Shourish Mukherjee. “As it is, Kolkata has donned the colours (blue and white) of the Missionaries of Charity. Making Teresa the patron saint of this city conveys the impression to the rest of the world that Kolkata is a Catholic city and eternally beholden to the Albanian nun,” Mukherjee added.

But more vehement objections are being raised over Francis Xavier who, it has now come to light, was declared the patron saint of this city way back in 1876. Francis Xavier not only had no connection with this city (apart from a prominent educational institution founded by Jesuit priests in 1860 and named after him), he was closely linked with the infamous Goan inquisition. The inquisition in Goa, initiated at the request of Francis Xavier, was brutal and directed against Hindus, Muslims and even Christians, who were deemed by the orthodox and regressive Portuguese church of that time as apostate.

The inquisition in Goa was particularly brutal and resulted in the deaths of thousands of Hindus and Muslims and some ‘apostate’ Christians. Many inhuman restrictions were imposed on Hindus and Muslims, and large numbers were brutally tortured and forced to convert to Christianity. Francis Xavier, who landed in Goa in May 1542 with the sole objective of converting locals to Christianity by force, had written to King John III of Portugal in 1545 strongly urging the latter to install the inquisition in Goa to punish pagans and idol-worshippers, ensure all locals convert to Christianity and also to punish those who were not following the tenets of Christianity very strictly. The Portuguese king agreed to Xavier’s request and the inquisition (which was already on in that country), was extended to Goa in 1560.

No official records of the inquisition in Goa exist since all were burnt after the inquisition was finally abolished in 1820. But enough accounts by victims and travellers of the horrific acts committed from 1560 till 1820 exist. One such account is that of 17th century French physician and writer Charles Dellon, who was a victim of the inquisition and wrote a book – Relation de L'Inquisition de Goa – in 1687.

In his book, Dellon listed many of the laws and prohibitions framed by the inquisitors in Goa. He listed over 42 practices of the Hindus that were prohibited: wearing ponytail by Brahmins, wearing the sacred thread, greeting with folded hands, growing the tulsi plant in front of one’s house and use of flowers and leaves during ceremonies. Hindus were also prohibited from worshipping idols and were forced to assemble in churches periodically to listen to Catholic priests abuse Hindu beliefs and practices.

The extent of the pogrom against Hindus brought about by the inquisition that Francis Xavier has asked for can be gauged from an order issued by Antonio de Noronha, the Portuguese viceroy in charge of all Portuguese colonies in India, in 1566. The order, a copy of which survives in Goa’s archives, translated into English reads: “I hereby order that in any area owned by my master, the King (of Portugal), nobody should construct a Hindoo temple and such temples already constructed should not be repaired without my permission. If this order is transgressed, such temples will be destroyed, and the goods in them shall be used to meet the expenses of the holy deeds as punishment for such transgression”. In the Bardez area of Goa alone, 300 Hindu temples were reportedly destroyed in just one year (1567).

The inquisition in Goa intensified from 1567 when rituals governing Hindu marriages, sacred thread ceremonies, cremations and other practices were prohibited. Priests belonging to the Society of Jesus (or Jesuits, as they are called) – an order co-founded by Xavier in 1539 – acted as agents of the Portuguese authorities and the inquisitors. According to accounts, the Jesuits played a major role in forcibly converting Hindus and Muslims to Christianity, identifying Hindus who resisted conversion for punishments and torture and in listing Hindu temples and mosques as well as dargahs for demolition.

There are other well-researched accounts as well of the inquisition, one of them being Dr Alfredo DeMello’s Memoirs of Goa. DeMello, in his book, quotes a letter written by Xavier to his fellow Jesuit priests after baptising a few converts from Hinduism: “Following the Baptisms, the new Christians return to their homes and come back with their wives and families to be in their turn also prepared for Baptism. After all have been baptised, I order that everywhere the temples of the false Gods be pulled down and idols broken. I know not how to describe in words the joy that I feel before the spectacle of pulling down and destroying the idols by the very people who formerly worshipped them”. DeMello’s book has been extensively quoted in this blog.

This article by Indic scholar Stephen Knapp also lists the atrocities perpetrated on Hindus and Muslims by the Catholic rulers, priests and inquisitors in Goa. Another account is provided by Richard Zimler is his historical novel titled Guardian Of The Dawn. Many articles (like this and this) have been written documenting the brutalities on Hindus and Muslims (as well as Christians considered to be ‘apostate’ simply because they had kept alive some of their old Hindu practices like wearing bindis on their foreheads or greeting others with a ‘namaste’) during the Goan inquisition. Many historians, writers and columnists have also written accounts of the inquisition.

What is galling is that not only has the Vatican ever apologised despite many calls (read this) for the same, the Catholic Archdiocese of Kolkata continues to keep Francis Xavier as the patron saint of Kolkata. “This is shameful and the Kolkata Archdiocese should immediately revoke its association with Francis Xavier who is so closely linked to the horrendous inquisition in Goa and had a deep seated bias against non-Christians. Not only does this city not need any patron saints, the name of Francis Xavier should not be associated with Kolkata,” said Vishwa Hindu Parishad’s Mukherjee. Kolkatans, who are aware of the horrors of Goan inquisition, echo Mukherjee and say that the alleged crimes of priests like Xavier should not be whitewashed but should be publicised and history ought to be told truthfully.

Also read: The Vatican Has Never REALLY Apologised For Any Of Its Crimes, And Neither Will It For The Goan Inquisition