Lords Of The Wrestling Ring: A History of Mysuru’s Vajramushti Kalaga 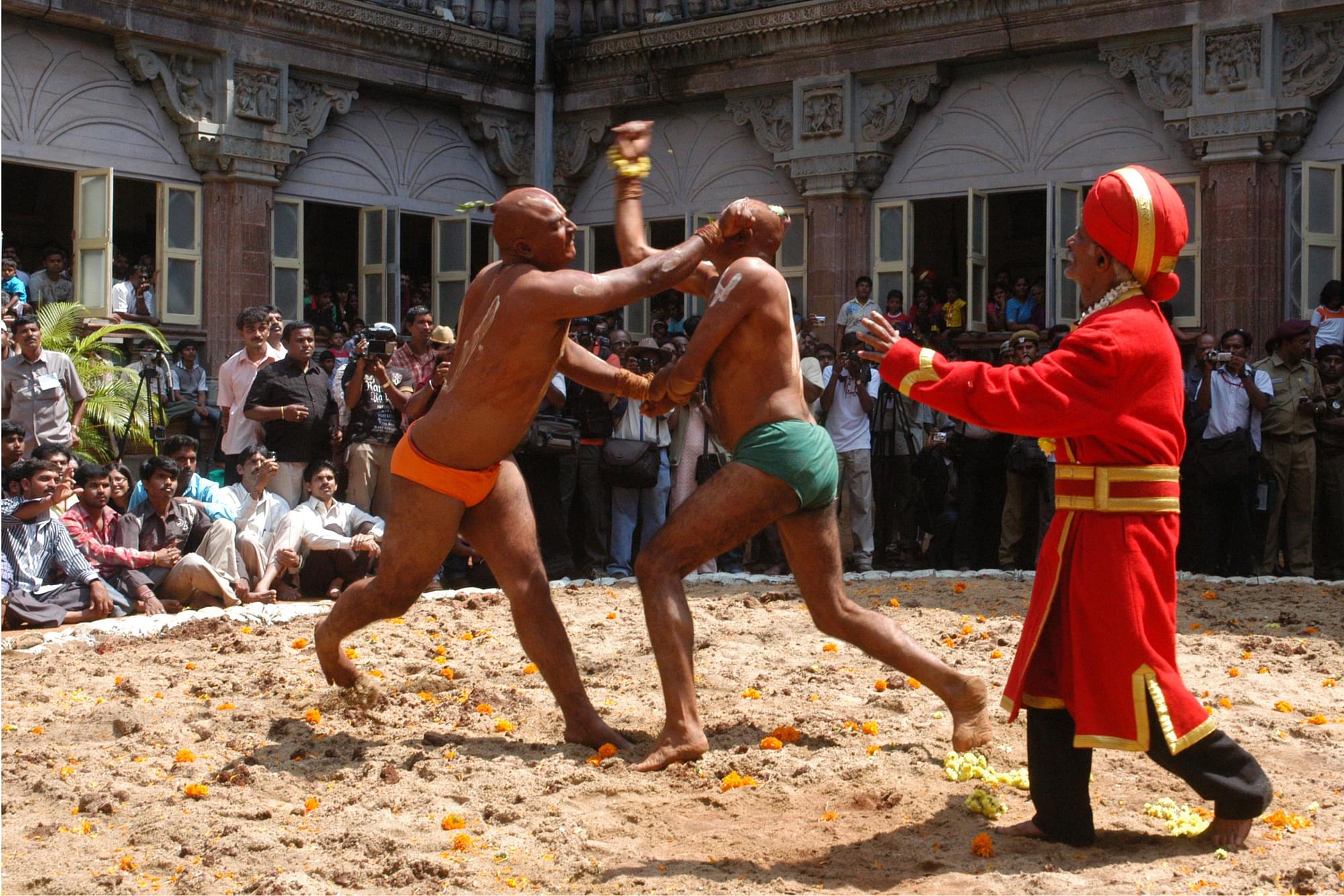 Coming into this royal city during Navaratri is like entering a wonderland of traditions, customs and relics. But within the cultural ambit which contains famous elements such as Mysore Pak, yoga, wrestling contests, religious symbols, and the Jamboo Savari, there is also an aspect which is cruel and macabre — the ‘Vajramushti Kalaga’(diamond fist duel).

In this special duel, at least four pairs of Vajramushti Jetties (wrestlers) engage in a duel with their opponent who has been previously paired with each of them. Each of them is armed with a ‘Vajramushti’ or a knuckle-duster.

This ancient weapon fits into the fist of the Jetti, has sharp jagged edges on the exterior, and in the past used to be made of ivory with diamonds as cutting-edge weaponry embellishments. The diamond was believed to be the weapon of last resort for the self-defence of a royal family member.

But during the time of Sri Krishnadevaraya — the king of the Vijayanagara empire — a new tradition woven around the Vajramushti began.

Navaratri will come to an end and conclude with the celebration of Vijayadashami only after a drop of blood of any of the jetties falls on the mud of the wrestling ‘Thotti’.

This tradition is continued even today. On the ninth day of Navaratri, this bout is held in the privacy of the quadrangle of Amba Vilas Palace in Mysuru. Only those who matter are allowed to witness this bout.

Who Are The Jetties?

“We are traditionally from Gujarat and settled in old Mysore area for over 600 years since the advent of the Moghuls. Many of our ancestors are settled in Maharashtra and are still practicing wrestling. Not much of Vajramushti is alive in that state.

However, they call it ‘Vyagranakha’ (in Marathi they call it Waghnakha) which even Shivaji wielded to kill Afzhal Khan, the general of Aurangzeb.

That weapon is closer to the Vajramushti in Mysuru, only with some modifications and material used in making them. Traditionally, once it is worn by a user, a drop of blood has to be applied to the weapon of oneself or that of the opponent, but that tradition has vanished for two reasons: Firstly, there are no Vajramushti Malla Yuddhas anymore.

Luckily, only one event is there in Mysuru during the Dasara celebrations, and secondly, the Vajramushtis as weapons have also dwindled in numbers and they do not make them anymore,” Hanumanth Jetty, an elder of the Jetti community says.

The Vajramushti jetties, a special breed of wrestlers, know every nuance of wrestling. Only as they grow more proficient, they graduate into Vajramushti Jetties.

“We are only a few in the last line of the Vajramushti Jetties. Our ancestors have migrated from Gujarat and made four places their home such as Chamarajanagar, Mysuru, Bengaluru and Channapatna, which are places where the Wodeyars of Mysuru Sansthanam ruled. Normally, our day begins at 3.30 am. We are quickly through with our morning duties and rush to the Anjaneya temple near the palace and go to our Akhada where we practice till 7 am. Though we do not engage in actual Vajramushti bouts holding the knuckle duster, we do practice the movements. Only one or two are available for practice in Mysuru. The situation in other cities like Chamarajanagar, Channapatna and Bengaluru are no different,” says Krishna Jetti of Bengaluru.

Elder Mallas (Jettis as called in Kannada), however, are not happy about the way in which the Vajramushti bout is conducted.

“There is a Vajramushti school called Jayatimalla in Vadodara where Vajramushti trainers feel that the Vajramushti should be practised by applying the basic tenets of Malla Yuddha. The Jettis must attain control over the opponent and strike with the Vajramushti on the scalp, gently, to draw blood. Vajramusthi itself is not a martial art weapon but it has to be used in combination with classical Malla Yuddha,” veteran Kusti Malla Venkappa Malla of Bengaluru says.

Tiger Balaji, a senior Ustaad of Vajramushti Kalaga, recounts the experience of the day on which the Vajramushti bout is held (on Navami).

“There is a schoolboy-like enthusiasm, when on a major part of the day, our hearts go thumping. It is not the fear of defeat, but the fear of failing to match up to traditional standards, that keeps us focussed. The day starts usually at 4 am. All the probable Jetties who are expecting to be picked by the council of selectors spend the entire early morning session in the Anjaneya temple and pray for courage, energy and strength. Later, they have a hearty vegetarian breakfast and proceed towards the inner sanctuary of the palace where the selection committee would have already had a sitting to call out the names of the participants. There is a great deal of secrecy maintained in announcing the names of the participants as it was a sacred act. We bear in mind that our actions at the Kushti Thotti will have a bearing on the beginning of Jamboo Savari”.

In fact, the bout sometimes ends so fast that it hardly looks like one. The jetties give out a war cry that is chillingly horrific before they strike at the opponent. Since the rule is to draw the first blood from the scalp, each jetty is trained to make just a scratch with the sharply sculpted Vajramushti on the head of the opponent. There is no animosity but only religious fervour and skillful pursuit of the art of Vajrmushti Kalaga. However, it is not a friendly bout. Each of them earnestly try to draw the blood of their opponents, which is, of course, the fruition of this age-old tradition.

Preparations for the Vajramushti event will start happening just after the Mahalaya Amavasya observation in the palace. The fixtures will be drawn taking seasoned Vajramushti Jetties from Mysuru, Bengaluru, Chamarajanagar and Channapatna and the bout will be held at the first ‘Ghalige’ (a measurement of time in Hindu Almanac) of the Dashami thithi.

Why only Jetties from these cities? These are the cities and towns that have Akhadas that train the Vajramushti Jetties during the last 400-odd years since the Wodeyars of Mysore Sansthanam took control.

The jetties who are trained in Vajramusthi train alone as the Vajramushti is a deadly weapon and cannot be used during the practice. The jetty has skills that are handed down from generations. Those who are paired must be of equal height and body weight and before the bout, they should tonsure their head. This is to give all the four jetties equal chances for drawing blood.

The Vajramushti As A Weapon Is Deadly

The Vajramushti is generally made of ivory or buffalo horn. This is specially designed for the Dasara bout, but those used in a real war situation will have an iron casting with spikes on each side and the user can punch, pierce and cut, with it. It is also called Bhukhandi in Gujarati and Indra Mushti. Those soldiers specially-trained to handle the Vajramushti go down with the weapon in victory and death, as the weapon is tied to his fist with a leather thread. There were special warriors who were two-handed Vajramushti fighters. According to palace historians, the equivalent of a Vajramushti was in use in ancient Greek and Rome, particularly in the arenas of boxing for recreation as in the coliseum.

Vajramushti was first mentioned in Manasollasa, a manual of warfare in the time of King Someshwara III of the Chalukya dynasty (1124–1138). British soldier James Scurry, who was in captivity under Tipu Sultan in Srirangapatnam, gives the first account of a Vajramushti in English.

Pairing of the Jetties were done traditionally at the royal court in the past before the Mysore Sansthanam had acceded into the Indian Union in 1950.

Even now, royal approval is needed, though ceremoniously. Referees for this match are appointed by the Palace Board. Any Jetty who tries to hold his opponent by the hands and tries to draw blood is disqualified. But none of that has happened in the past, recalls Tiger Balaji, a former Jetty and a referee even in the 2019 edition of Dasara.

Today, however, the Vajramushti Kalaga has been reduced to just a ritual.

Palace records show that the Jetties come from the family of Jetties from Delmal in Gujarat and sometime in the 11th century, they had settled in Mysuru, Bengaluru, Chamarajanagar and Channapatna where they built their Akhadas — these families had become friends of the Hoysalas, who ruled Mysore then.

The present generation of Jetties belongs to basically four families in the four cities.

Madhava is now well known as a Vajramushti Jetty. He is the son of the great grandson of Kari Jathappa. This family had been in the service of the royal family right from the time of Mummadi Krishnaraja Wodeyar. Apart from being the Vajramushti Jetties, they also worked in the palace in various capacities like courtier, suppliers of various things specially for the royal family.

Tiger Balaji, who is well known for his Vajramushti prowess, belongs to the family of Kari Jathappa, is presently the referee of Vajramushti events. He remembers Rama Jathappa, his great-grandfather, who was supposed to be invincible in Vajramushti Kalaga.

Tiger Balaji has a fleet of autorickshaws for a livelihood. Officials in the Palace Board of the Government of Karnataka say that though the Dasara Kusti (mud wrestling) gets Jetties from all over Karnataka and from the neighbouring states, for Vajramushti Kalaga, only four are shortlisted each from the four families. The panel that pairs the Jetties for the Vajramushti Kalaga includes Ustaads from four families or rather four cities.

Dashamandi Srinivas Jatti, Tiger Balaji, Madhav Jatti, Chamarajanagar’s Bangaru Jatti, Bengaluru’s Krishna Jatti and Channapatna’s Ustad Purshottham are among the Jetties who have become legends in their own times. Tiger Balaji, who was a favourite of late Shrikantadatta Narasimaraja Wodeyar between 1980-1988, had defeated all jetties who challenged him in Vajramushti bouts.