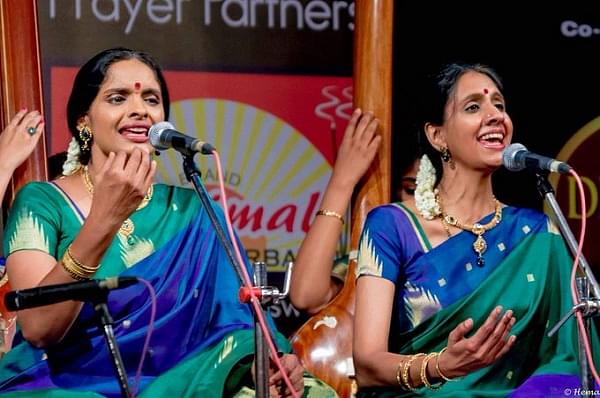 The United Nations Educational Social and Cultural Organisation (UNESCO) has included Chennai in its list of Creative Cities for its contribution to music.

In a message, he was quoted as saying, “Congratulations to the people of Chennai on the city's inclusion in the UNESCO Creative Cities Network for its rich musical tradition. Chennai's contribution to our rich culture is precious. This is a proud moment for India,” on 9 November 2017.

There are sabhas and sabhas, led by the Music Academy, hosting hundreds of classical music concerts throughout the day.

Come 15 December, it would be a 6 am to 10 pm affair, nonstop. Of course, there would be the mandatory stops at canteens attached to the sabhas, where all and sundry will dig into the delicacies on offer with a hot cup of trademark filter coffee that is Chennai’s own Kumbakonam variant.

We will get there when it happens. The early start to Margazhi Music Melodies with the “All Are Welcome’ tag is a huge bonanza to have with the ‘stars’ singing early in the season, when their voices are fresh and not afflicted by the mild margazhi nip in the air.

Not necessarily Ranjani and Gayathtri now, the two erstwhile violinists are today singing in one voice. Close your eyes, and hear them. There is such synchrony in their rendering that one might be forgiven for thinking that just one musician is singing and not two.

Bless whoever it was who goaded them into taking to singing, than accompanying vocalists. It would appear that Akkarai sisters, S. Subbulakshmi and S. Sornalatha too are following RaGa’s footsteps or more appropriately, vocal chords, even while they accompany major artistes on the fiddle.

Opinions notwithstanding, the truth of the matter is that it is vocal renditions that tower over instrumentals.

Even instrumentalists have their grouse in this regard, that for the rasikas, they come a long way behind, or as mere appendages.

Sangita Kalanidhi Kanyakumari, a violinist who played shadow to the legendary M L Vasanthakumari, was openly critical of ‘step motherly treatment to instrumentalists’.

A century by a batsman always tips over a 5-wicket haul by a bowler, and that is as natural as it comes with the turf.

On 1 December 2019, Bharatiya Vidya Bhavan (notwithstanding the consistent downpour in Chennai) saw a packed hall around 6 pm for a 6.45 pm ‘RaGa’ start.

The balcony sported squatters on the aisles, discomforting those seated. The luckiest possibly was the female artiste who was winding up her 5 pm concert.

She had a full house for the last 30 minutes. The millennial girl squatting next to me was bemused.

“If we ever make it to the platform, we should somehow wangle a concert time before that of RaGa or Sanjay Subramanian. Our day would be made. We can boastfully claim to have performed to a full house, at least for a few minutes. That possibly may be the only way, we can avoid singing to empty seats, ” she was heard saying.

What is so magical about the RaGa sisters? What is the ‘X’ factor that draws rasikas in droves?

An elderly next to me, struggling to squat, says, “It is so uncomfortable for me. And I surely can’t seek out a seat and dislodge anyone, no matter how younger they are. It would be unfair. But when it comes to RaGa and Sanjay Subramanian, it’s a no-miss. The lilt in their tuneful singing is too alluring.”

As they open the concert at 6.53 pm with Tyagaraja’s Sri Janaki Ramana, a crazy thought crosses the mind. Imagine the formal launch of the Sri Janmabhoomi temple at Ayodhya, after the Centrally mandated Trust gets down to business.

What if ‘RaGa’ are called in to perform for the auspicious start. And Tyagaraja’s Rama Bhakti, devotion, dedication and 700-strong repertoire, can provide a perfect launch, to make it an occasion for the 33-crore gods to remember. Why not? Who knows?

Of late, RaGa are inclined to assert that the acoustics must be close to perfect, as the hall and logistics permit. Tiruchur Brothers are particularly finicky in this tuneful turf.

They rarely hesitate to take time before they sing. Nothing is wrong with it. How can artistes who pride themselves in their performances, perform with less than congenial acoustics support.

They are right and are entitled to expect it. Sir Donald Bradman, when taunted with comparisons to Victor Trumper who did not care for ‘pitch-perfect or tools of trade’, responded to the provocative commentator saying, “Excuse me, go try playing on a torn billiards or snooker table. This is my life. I have sacrificed my all for it. And the audience has come not to see me struggle to perform: the conditions do not belong to this level. And comparisons are odious. To each his own”.

It would, therefore, be unfair to compare them with say, ‘SS’, who comes, squats and delivers, no matter the ambience or acoustics. He sets it for himself. To each his own, for sure.

The raaga alapana in Narayani (they revealed, please) was regal and resplendent. This is where their magic belongs. It seems as though the mother had brought them up on a diet of honey and that was paying sweet dividends.

The delineation of a raaga will reveal or expose class or the lack of it. In the name of Manodharma, I have heard artistes imaginatively cut the raagas to ribbons, rendering it difficult to piece them together again.

The late legendary critic, P.V. Subramaniam, can be cruel with his pungent tongue and blood dripping pen.

As they break into the fast-paced Thunai Purintharul, the Papanasam Sivan classic, one feature that catches the eye is the huge share, not mere sprinkling of the younger lot.

Of course, the elders cannot be denied their space. We live in times when wobbly knees have become the rule and the Mylapore genteel, who make it big to their home terrain, wrestle with their physical discomfort and metaphysical inclination to stay beyond 8 pm.

It is a tough choice. A pause in the concert, is time for a grievance. Why cannot these sabhas have such major artistes at least at 5.30 pm and conclude by 8pm. Do we not matter anymore?

As a Sabha Secretary friend (one has to have the ‘network’ to gain entry, when it matters, you see), bemoans,

No Sabha has been able to arrive at optimum concert time for the last two concerts of the day, which are paid ones, once the business side of the season commences. Even Music Academy cannot claim to have mastered this schedule. They have groped from 3.30 and 6.15, to 3.45 pm and 6.30 pm and are still experimenting. But I do agree that we need to explore whether, at least for the likes of RaGa and Sanjay Subramanian, we can make an earlier start, allowing the elders to beat their dinner time regimen with loads of capsules.

Gopalkrishna Bharathi’s Innamum Sanketha Padalamo, raised a doubt in me — whether one of the sisters had the beginnings of a sore throat.

But the thin coarseness added to the beauty of the sweetness and did not detract. That is where class comes. They manage to elevate themselves. They pick up kritis that fit the day and throat.

These top artistes have a lot riding on them in terms of expectations. Climate change is no hoax as Donald J trumps. It is real, and December in Chennai can be tricky to vocalists. And they may have their hands, sorry, throats, full of concerts to deliver.