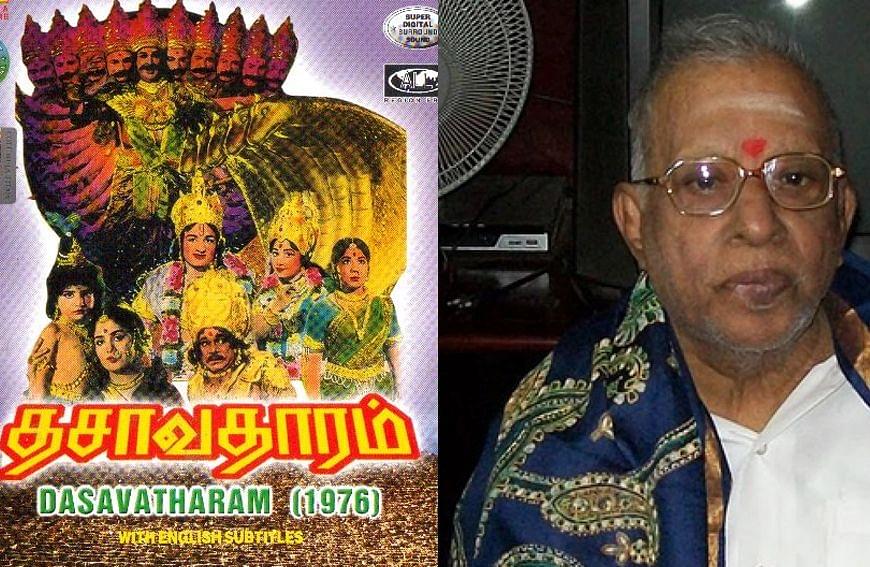 Ideally this should have been posted on Narsimha Jayanathi. But somehow it got missed out. Apologies, dear reader. I was watching an old movie. When you have a block that stops you from writing even though you so desperately want to write, then, to me, watching old movies — Puranic movies, I mean purana (old) Puranic movies in Tamil helps. Kindling childhood nostalgia can be a way of breaking the writer’s block.

The movie I watched is 'Dasavatharam' (1976) by director K S Gopalakrishnan (1929-2015). It was released just as emergency was imposed and K Kamaraj, the great nationalist leader, had died broken-hearted at the utter disregard Indira Gandhi had shown for democracy. This movie was dedicated to him.

The movie 'Ten Commandments' had recently been screened in our district. From most of the Christian schools, the students — all students, Christians and non-Christians — were taken to the theatre and made to watch the movie. Hey, no one complained. You get your classes off! You walk to the theater in orderly lines and you get to taste the stick-borne ice cones that were otherwise strictly forbidden in the school campus. What’s more, the show would be at around 10.30am to 1.00 or 2.00pm and so you got to be out of the school for the entire evening. But what I distinctly remember still is how there was an indirect hint by the teachers and direct taunts by fellow Christian students that the Egyptians were “kind of Hindus”. They worshiped many gods and idols and were “pagans”.

So when this Puranic movie was released, it was like a Hindu answer to the 'Ten Commandments'! But of course the Hindu schools did not reserve tickets in the theater and compel students to watch it. However, almost all Hindu families in our area had seen the movie.

In retrospect, one cannot compare the movie even by that day’s standards with the 'Ten Commandments' in terms of the special effects or over-all screenplay. Yet, there was something in the movie that made us all spellbound then. Almost everyone's favourite in Dasavatharam was the Narasimha Avatar.

I have seen a recent rendering of the same story. The Hindu Puranic movies and serials have not improved. In fact they have deteriorated. They almost always look like kindergarten school dramas acted by grown-ups, only now with the background of computer-generated Vaikundas and Indralokas. However, late Gopalakrishnan was known for his dialog delivery and compared to what we have today, the Prahalada episode in the Dasavatharam movie is superior in every aspect.

One should remember that the 1970s was known for the Dravidianist attacks on Hinduism — particularly the so-called 'rationalist' attacks. Dravidianist rationalists are an unique breed in the world. They can never understand poetry nor the language of the Puranas. They demand that the language should be taken literally and then they label the Hindus as irrational.

Now in the movie, the director had presented M R Radha, a Dravidianist actor known for his visceral hatred for Hinduism, as Hiranyakashipu and made him speak all his 'rationalist' arguments and then, through the words of Prahalada, he answered those questions.

This was a bold, innovative method then to counter Dravidianism. For the movie-going people it was easy to identify M R Radha and Dravidian "rationalism" with Hiranyakashipu and he being defeated in his arguments by the child, Prahalada. And K S Gopalakrishnan also made an interesting observation. He made Hiranyakashipu say that it was because of his even greater faith in Vishnu saving his child that he gave poison to Prahalada. It was a subtle, subliminal message though a strong one that beneath the fake atheist cover of most Dravidianists there exists an undercurrent of undying Dharma.

Watching the movie now, it struck me at one point that it was not just the director K S Gopalakrishnan who was doing this but the very popular understanding of the Narasimha Avatara slaying Hiranyakashipu has in it a strong rejection of dealing with the natural world in reductionist binaries.

The question that Hiranayakasipu asked Prahalada was, in a way, related to the same mindset that he had in asking for those boons. He wanted Prahalada to answer a definite "rational" question — was Vishnu there in that particular pillar or not. Immortalized not only in Puranic texts but in every regional folk theatre in India and enacted every day in almost a hundred temples on one occasion or other, predominantly in South India, the answer that Prahalada gave was philosophical: ‘He is there in that magnificent pillar as He is in the speck of dust.’

Today in Tamil Nadu these lines are so popular that every one in every strata of the society understands this with ease and has internalized it with comfort. A Harvard PhD in religious studies would find it troubling to internalize what Prahalada said with such an ease.

Epic traditions of Tamil Nadu show such a remarkable unity with the village theater depictions of Prahalada that it is actually hard to say where one ends and the other begins.

Kambar, the Mahakavi, inserted the Narasimha episode into his Ramayana, as Vibeeshana narrating it to advise Ravana. Here Prahalada enters into a great philosophical exposition of the nature of the Divine and its relation to the apparent universe:

The enraged Hiranyakasiphu unleashes torturous persecution of his own son — throwing him from a mountain cliff, getting wild elephants to charge at him; making poisonous snakes bite him, putting him on fire, etc. But Prahalada comes out of all these tribulations unharmed. At this point, Kambar, through Vibeeshana, draws a parallel between the fire not harming Prahalada like the way it did not harm the tail of Hanuman! And in the end, at the climax, where Hiranayakashipu asks him specifically, the child answers:

This is the deeper reality of existence that the shallow materialist and reductionist forget. When such a shallow reason begins its tyranny then it destroys the capacity of humanity to evolve and grow at various levels.

There is divinity in everything that Prahalada could see. His father, on the other hand, could not only, not fathom the deeper residing mystery of all existence but he insisted that the only reality is the apparent one. And what is more, he went on to persecute those who insisted on the presence of a deeper, divine mystery in all existence beneath the apparent forms — going to the extent of a murderous persecution of his own son.

In fact, this is what the Catholic inquisition did. That is what a Stalin does. Both the monopolistic theologies like that of Christianity and Islam, as well as ideologies like Marxism, insist there is nothing sacred inherent in nature — because divine is either transcendental or there is no divine at all. The shallow pseudo-rationalist movement in Tamil Nadu is indeed the most obscene caricatured expression of this fallacy.

But, as Kambar shows, for Prahalada, in his Darshana (view), all physical existence is His body and He is the soul that resides in all. In the Western philosophical tradition, it was the seventeenth century monist philosopher, Baruch Spinoza, who came closest to this view that the Deity was immanent in ‘nature’. It was for this ‘heresy’ that he was condemned. And Spinoza was one of the staunch supporters of reason.

Hiranya is also called Hiranyaksha. Kambar uses this name, translating into chaste Tamil as the gold-eyed one. What does the name imply here? Isavasya Upanishad perhaps gives us a clue. The deeper reality is covered by the golden shining disc. The gold-eyed one, that is Hiranyaksha, is one who cannot penetrate beyond that golden veil — having a shallow view of nature, which in turn boosts his ego in a monstrous way — something that happens to us individuals and to the societies and cultures as well. And the child within us, or the fresh visions that emerge in the society, point out this fallacy.

Often the power structure of the society or the ego of the individual tries to suppress this child within. However, if the child is persistent then the pillar of this naive perception of reality collapses and from it emerges the Divine that defies all categorizations we make, demolishing all the pigeonholes we construct to put reality into neat categories. The Divine that emerges so precisely is the Divine of the continuum — the strand that unites the pearls, as Sri Krishna says in the Bhagvat Gita.

Coming back to the movie, it is astonishing how director K S Gopalakrishnan integrated all these aspects in an average Puranic movie. His genius in using a Dravidianist actor to utter the dialogues of Hiranyakashipu made the movie effectively immunize a vast section of Tamil Hindus against the pseudo-rationalist propaganda of the Dravidianist movement!

What the movie perhaps lacked in the ‘special effects’ section, the dialogues more than compensated for it. Perhaps it is time for Tamils now to revisit the works and values of K S Gopalakrishnan and update and adapt them for the current propaganda war that is happening in Tamil Nadu. Given the fact that the same narrow vision of Hiranayakasiphu is threatening Tamil Nadu in the socio-political and cultural spheres, doing that may make the much-needed Narsimha manifest.