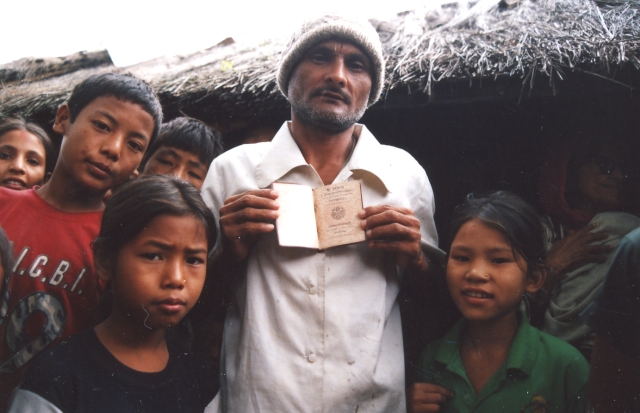 Large numbers of Bhutanese Hindu migrants in the US have been converted to Christianity. The sizable pool of asylum-seekers fleeing ethnic violence in their own countries is seen as a very important target group by evangelical groups.

The mountain kingdom of Bhutan conjures up images of a utopian Shangri-La where the well-being of people is measured by Gross National Happiness; a place where people live in perfect harmony. However, there is a dark story of persecution of the Nepali-origin, largely Hindu community of Lhotsampa in the country that has received scant attention from the media. It appears as if the “happiness” of the country only refers to those left behind after a massive ethnic cleansing.

Today, about 75,000 refugees from Bhutan are spread out in different parts of the US while several thousands more have been transplanted to Europe, Australia and other countries. Still others are eking out mechanical lives in camps in Nepal.

In the early 1900s, a large number of Nepali settlers began to cultivate land in the uninhabited southern areas of Bhutan. According to some, the settlers go back as far as 1600s. As infrastructure projects began to develop in the land, it brought construction workers of Nepali origin who settled down as well. Soon they diversified into small businesses and the number of Lhotsampas swelled. Seeing a threat to its cultural identity, the Bhutanese monarchy imposed its draconian ‘One Nation – One People’ policy in the 1980s, which promoted not only the Dzongkha language and the Buddhist religion, but also the national dress code and etiquette called the Driglam Namzha. 1958 was declared the cut-off year for Nepali immigrants and anyone who could not furnish proof of residency before that was considered an illegal immigrant and asked to leave.

In the years that followed, the Lhotsampas were subjected to severe repression and forcible attempts to assimilate them into Bhutanese Drukpa traditions. As protests grew within the community, the menfolk were rounded up and tortured while the womenfolk were raped and intimidated. Refugees who began to leave the country in thousands for Nepal recount horror stories of abuse. Initially, they resorted to begging for survival. Many died as a result of dysentery and other diseases. Eventually, in 1991 the Lhotsampas were housed in camps set up by the United Nations Refugee Agency (UNHCR) close to the border of India and Nepal. By 1996, the population in the refugee camps grew over 100,000.

According to many of the Bhutanese refugees, not enough has been done by the international community to get Bhutan to accept its responsibility for this humanitarian crisis. However, from 2008 onwards, the US has resettled the maximum number of people followed by Australia, Canada, Norway, Netherlands and Denmark.

Life was initially traumatic for the Bhutanese living in exile in America. Unable to speak in English and struggling to perform even simple chores such as buying groceries in an alien land, the people felt disoriented. According to reports appearing in various US publications, suicide rates have been very high in this community.  A 2012 report on the suicides pointed out that different psychological stressors occur at each stage of the resettlement process. Once refugees are relocated, factors such as inability to find work, increased family conflict and symptoms of anxiety, depression and psychological distress are associated with suicidal thoughts, it said.

Houston in the US state of Texas has absorbed the largest number of exiled Bhutanese. One of the organisations working overtime to help the refugees is Sewa International (Sewa), a Hindu humanitarian non-profit service organisation. Sewa is helping to equip the immigrants with computer skills, English proficiency and professional etiquette. Having lived in a refugee camp for over 20 years, most people lack the basic skills and discipline needed to work at a job. “At the camps in Nepal, they were not doing anything constructive; they were getting their meals; 20 years is a long time and they have got used to that,” says Vasudev Singh of Sewa. “Most of them do not feel motivated to work or follow the discipline that comes with a job,” he adds.

The elementary school children however are faring better. Since schooling is compulsory in the US, these kids are happily picking up English and other subjects unlike the older high school kids who are facing problems in integrating with other students.

Finding volunteers has been the biggest challenge for Sewa. “The children need help with homework and computer skills,” says Laura Frye, a Sewa employee. “We need volunteers who can come in regularly; it is very challenging with so many kids needing one-on-one attention,” she adds.

And yet, there is no dearth of Christian missionaries who are actively working to proselytize the Hindu refugees. According to anecdotal numbers, about 80% of the Bhutanese immigrants in Houston have been converted to Christianity by the missionaries who take busloads of people to churches every Sunday. In fact, the large pool of asylum-seekers in America fleeing ethnic violence in their own countries is seen as a very important target group by evangelical groups. The pastor of a Baptist church was quoted in the Houston Chronicle as saying “We don’t have to go to the nations. The nations have come here.”

Indeed, the churches make no secret of the opportunity to “bring Jesus into the lives” of incoming refugees. “The major social change of immigrating to the US presents a window of opportunity for the Church to capitalize on higher receptivity as refugees adjust to American culture, redefine their identity, and are presented the option to learn about the Church,” says a case study prepared by Latter Day Saints.  The study warns that receptivity to the church and religion in general is often time-sensitive.  It explains that within just a few years “the Church could lose the opportunity to perform missionary work when conditions were most optimal as over time receptivity wanes as communities are solidified and new societal attitudes are more developed”. The study also makes reference to the other ethnic groups that came to the US in the past such as the Hmong, Laotian, Cambodian, Vietnamese, East Africans and Burmese immigrants who were successfully targeted by missionary groups.

Further, the document explains that recently baptized Nepali-Bhutanese converts can aid in expanding missionary activity within the community not only in different cities of the US but also within Nepal itself.

“It is ironical that these refugees with names like Ganga and Radha, are getting completely alienated from their own culture and traditions!” exclaims Iswari Madapura, a volunteer with Sewa. “While a Hindu organisation like Sewa is focussing on teaching computer skills and getting them jobs rather than stressing on Hindu traditions or texts, the Christian missionaries are systematically harvesting their souls,” she notes. According to Ms Madapura, religious conversion undermines the basic human values of trust and respect.  True service is done with a conviction that it is one’s duty to help whenever there is a need, without expecting anything in return and causing no harm, she believes.  On the other hand, “religious conversion destroys the understanding of the innate fullness of the divine in all embodied living creatures.”

With access to enormous funding from donors, the missionaries spare no effort to win over the refugees with gifts and promises of a vastly better life. The emotionally and financially vulnerable have been the first to succumb. Only a small minority of the Lhotsampa have been able to resist the pressures of the Christian missionaries.

Even within families there have been dissensions with the elders refusing to change their religion, while the youngsters do not want to turn away the economical and educational benefits offered by a change of religion. “An elderly gentleman I knew well, who was a Hindu priest, recently committed suicide because he could not bear the ignominy of his whole family converting to Christianity,” says one Buddhist refugee whose family has managed to ward off the missionaries. “The new Christian converts maintain a distance from us and even look down on us,” he reveals.

It is hardly surprising that a number of new converts, armed with American identities and fired with new missionary zeal are going back to Nepal (and even Bhutan) to spread the Gospel. With the advantage of speaking the local language, and trained by the best, these people are inflicting new stresses on vulnerable populations, especially as they label the non-Christian faiths as pagan and regressive. About 2.5 lakh people in Nepal have already converted to Christianity in the past four years, according to a Swarajya article published on December 28, 2014.

If history is any indicator of the future, then the Bhutanese Lhotsampas in America, like the others before them will likely continue to work in blue-collar jobs for years to come. But, not all can forget their country of origin. “There is really no place more beautiful than Bhutan; nothing can come close,” says Jaya Gurung, with a look of sadness.

Most of the exiled Bhutanese have discarded their cultural symbols, their Ganeshas, their Lakshmis, and their festivals in favour of Christian symbols and festivals. In a travesty of fate, the people who fled their homeland rather than giving up their ethnic identities have ultimately surrendered their culture to proselytizing forces.