Raman Raghav 2.0: The Most Depraved Indian Film Ever Made 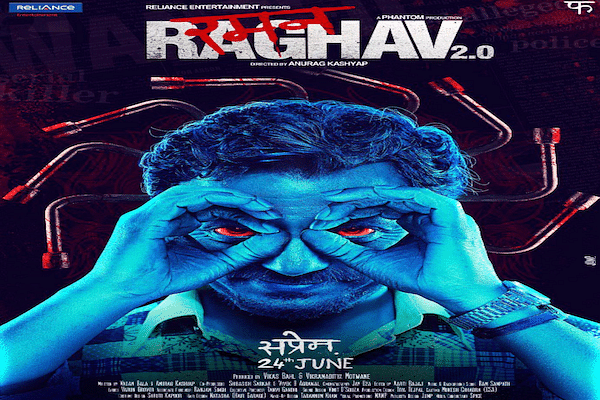 Anurag Kashyap is a nihilist. The world he inhabits offers no hope, no redemption, no justice. Forget about anyone living happily ever after; no one lives even happily. In fact, most of them don’t live too long; they careen towards senseless deaths. Often, they die obscenely petty deaths.

But there is no damnation either. Because damnation presupposes the existence of a soul, and hardly any character in any Anurag Kashyap film has a soul. Neither do his (often extraordinarily crafted) films. Not soul, not heart. You engage with Kashyap’s films intellectually and never feel anything for the characters. Because the director also does not feel any empathy for them.

Which is a pity. But pity is also an emotion that does not exist in Kashyap’s universe.

Raman Raghav 2.0. Even by Kashyap’s standards, this is a particularly soulless film. In fact, it may well be the most depraved Indian film ever made (I use the word “depraved” without any value judgement, only as a descriptor).

Ramanna-the ‘Raman’ of the title-is as psychotic a serial killer as you have ever met and he is obsessed with Raghavan (Raghav), a Mumbai police officer, for reasons that are revealed at the end of the film-though alert members of the audience would have guessed it in the first 10 minutes. Trouble is, Raghavan is a desperate coke addict and a thoroughly nasty piece of work.

Without giving away too much of the story, one can say that both inhabit an utterly amoral world, and both kill innocent people. The only difference between them is that Raman kills because he wants to, almost casually, and Raghav gets a bit worked up before taking the decisive step.

But Raman has reached a stable equilibrium of evil, while Raghav rapidly slides down into the dark, and at the end of the film, has, in a way, become Raman.

On pure cinematic terms, Raman Raghav 2.0 is an exceptional film. From the cinematography- the lighting and framing of every shot is perfect- to the brilliant use of sound, to the editing and the detailing, this is the work of a director at the height of his powers.

There are subtle semiotics at work- Raghav drinking water all the time, the frequent shots of aircraft taking off or landing, Raman often asking for cigarettes and then discovering that he has no matches to light them (while Raghav chain-smokes), Dussehra (Ram Leela) and Muharram falling on the same day.

The way Kashyap has structured the film- a prologue and eight chapters- is absolutely essential. One cannot even imagine Raman Raghav 2.0 without this structure, just as one cannot imagine Kashyap’s breakthrough film Dev.D without its brilliantly innovative storytelling technique.

The performances are flawless. Nawazuddin Siddiqui as Raman is disgustingly creepy, and Vicky Kaushal as Raghav is disgustingly- well, disgusting. Every character and every actor playing that character seems to have been brought together with preternatural precision.

All this superb talent on display-one must give the entire credit to Kashyap, who is a true auteur- raises a very simple question.

Why did you make this film?

(Your grammar may be perfect, but your essay may be useless).

Raman Raghav 2.0 just seems totally pointless. What is its reason to be born or watched? Yes, art has neither moral responsibility nor should it be shackled to some purpose. Art for art’s sake is fine, as far as I am concerned.

Also, because I believe in freedom of expression, I certainly support Kashyap’s right to make such a film. As I am sure he would respect mine.

Why have a long discussion in the penultimate sequence of this film between Raman and Raghav about the meaning of life, the universe and everything that is total crap, and a pitiful attempt at intellectualizing whatever had happened till then?

Warning! Whenever a film has a penultimate sequence that speechifies or tries to tell you what your takeaway should be from the 120 or 180 minutes of your life you’ve given to it, grab a handful of salt. It’s not a great film. Great films do not try to explain themselves.

And Anurag Kashyap has been there, done that. The hugely unfairly, underrated Gulaal is one of the most powerful films I have ever seen. His two-part Gangs of Wasseypur will figure prominently in any history of Indian cinema that’s worth anything. In my opinion, Dev.D should also be allowed a few paragraphs.

There is serious contradiction between presenting an entirely amoral, one-way street and then trying to justify the traffic rules through low-level, pseudo-philosophy. Raman Raghav 2.0 is a tale of two bestial psychos that would anyway shock anyone who is not a normative pervert.

That is where Kashyap fails.

He tries to answer that question: Why did you make this film?

He should not have tried. He could have left the film as it is, and we would anyway have come out of the hall teetering on the edge of manic depression. We didn’t need any explanation for any sort of way, the people he has thought up behave. As cinema, Raman Raghav 2.0 succeeds. As a film, it does not.