Rath Yatra: Many Tales Behind The Story 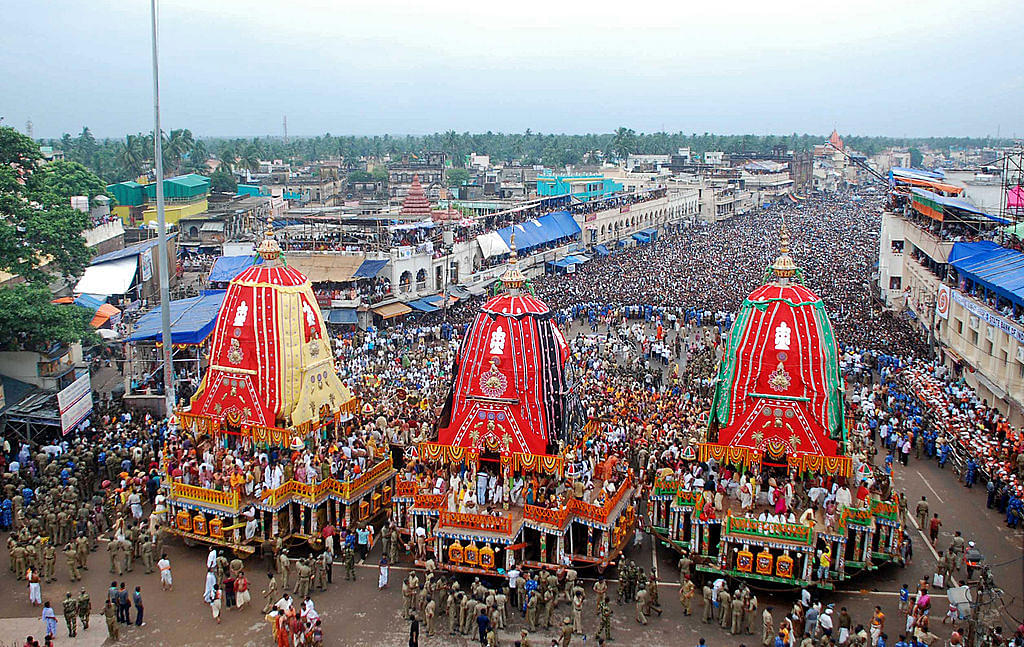 Devotees gather as three giant chariots are pulled during the Rath Yatra of Lord Jagannath in Puri. (Photo credit should read STR/AFP/GettyImages)

It’s that time of the year again, when Lord Jagannath and his elder brother Balabhadra and sister Subhadra, go on their annual vacation, travelling on grand chariots from the Puri temple to their aunt’s place in the Gundicha temple. The reason that the Rath Yatra is also called the Gundicha Yatra! And just like the years before, preparations are grand – be it the building of newer chariots, the special set of clothes that the deities – especially Lord Jagannath who takes on the nine avatars in the time – will adorn during their nine-day stay at Gundicha. Despite accidents and injuries, the loud cheers when the chariots are pulled, and the crowd frenzy seem to be reaching a new high year-after-year.

So what is it about the oldest chariot festival (the other two are in Ahmedabad and Manipur) that keeps it perennially young and relevant? Is it just the legend, which compares the “coming out of the god” to his journey from Vrindavan to Mathura to kill Kansa, after all Lord Jagannath is a reincarnation of Vishnu/Krishna (and the festival recreates it in a manner befitting god). Or, is it the more humane folklore in which after ‘Devasnana Purnima’, the lord falls severely ill for 15 days where he is fed chakta bhogo (made of wheat, sprouts, jackfruit and mango) and modak by the temple’s kobiraj (vaids), and once fully recovered, the lord decides to visit his aunt’s place for a change?

Or is it the idea of the Rath Yatra, which is a ruse for the god to walk out of his abode to meet his people—caste, creed and religion notwithstanding? After all, the first reincarnation of Lord Jagannath called Nilamadhab (due to his colour) was discovered and first worshipped by the Savara (cattle-breeding tribe) king, Viswavasu.

It is a sum total of all, say seasoned cultural columnist Kedar Mishra and temple ritual and cuisine expert Minati Parhi, who believe the Rath Yatra to be the first non-Vedic festival that was devised to bring people of different communities together. In fact, Mishra adds, “the inspiration of the Rath Yatra was from the Buddhist ritual of using hand-made chariots, where they used symbols of Buddha to popularise the philosophy of ahimsa with no attempts to covert people.”

Chinese traveller Fa Hien, who visited Odisha in the fifth century AD, writes about the various chariots of Buddha being pulled along public roads – it is a tradition that is still practiced in Nepal, where god and goddesses are believed to be the different avatars of Buddha.

Although, the motif of the rath, or the chariot, acting as the carrier for gods, per se, can be found in the Vedas themselves. The Rig Veda speaks of the hymn itself as the chariot that reaches to the gods and is also the vehicle of sacrifice that brings gods to humans (Rig Veda II.18.1). At another place, the seers who created the Vedic verses are regarded the makers of such chariots (RV I.61.4). Taitreeya Brahmana (verse I.5.12.5) makes Prajapathi say that the ‘metres were his chariot’ and Gayatri and Jagati became the sides of the chariot and Usnil and Tristubh its side horses while Anustubh and Pankti became its yoke horse and Brahti, its seat. The Upanishads also use the metaphor of the chariot and its rider for the body and the Atman respectively.

Parhi, however, has a different take on the reason behind the origin of the Rath Yatra, which she believes was the outcome of the rise of the Vaishnav cult, which propagated love for Lord Jagannath, without the necessity to change your religion. “Those were days when the Bhakti movement was on the rise, and tired of the restriction of a Brahminical society, people were looking at gods who loved them equally. Krishna or Lord Jagannath (one of the various incarnation of Vishnu) emerged as one who fit the bill – he was perceived more human-like (he fell ill after a ritual of snana, had fights with his wife, Lakshmi, wanted devdasis to entertain him and four meals a day!) and didn’t believe in any sect. The Rath Yatra though based on a legend, where the king dreams of organising such a festival, became the obvious way to have a better stronghold.”

Politically of course, it was a great way to consolidate the kingdom. Some of the best works on Jagannath – and his miracles – have come from people who weren’t Hindus. Like the 17th century poet Bhakta Salabega. A Muslim by birth and a subedar in emperor Jahangir’s army, he turned a Jagannath devotee after surviving a grave injury. It is said that once Salabega was late for the Ratha Yatra and was worried that he may miss seeing his beloved Lord on the chariot. He prayed to the Lord to stay put until he reached Bada Danda (the grand gate).

That day, miraculously, Nandighosha (the chariot of the Lord Jagannath) didn’t budge until Salabega reached the spot. And even today, the Lord waits exactly at the same spot for the same amount of time before starting his journey. Salabega of course, emerged as one of the leading Bhakti movement poets of Odisha with his numerous devotional songs written as an ode to lord Jagannath.

Yet another legend that adds to the universal appeal of the Rath Yatra is the ritual of chera pahara, where the Puri Gajapati (king) comes to sweep the three chariots, before the journey begins. It is said that the practice began after the Gajapati decided to sweep the chariot and the floor so he could qualify to marry his queen Gundicha, another devotee who belonged to the lower caste. The idea behind the ritual, says Pahri, “was that of equalisation. There is no rich or poor in the Lord’s eye. And hence the ruler too has to become the sevak for one day of his life.” The chariots, it is believed, will not move until the ritual is performed.

It was this system of inclusion in exclusion – Sri Mandir is the only temple where even VIPs like former prime minister Indira Gandhi and general Alexander Cunningham have failed to gained entry – that was instrumental in Rath Yatra’s continuation even during the British Raj.

Curiously, the first observation of Puri Temple that William Bruton sent to Europe was that of a monstrous-size pagan divinity – “Jagannath is in shape of a serpent, with seven heads” and the holy pagoda is “the mirror of all wickedness and idolatry”, he had written on hearsay.

Claudius Bucchanan, who visited Puri as part of the Indologist missionaries, said, “The Indian Moloch’, has been recorded by the historian George Gogerly as – “…a frightful visage painted black, with a distended mouth of bloody horror.”

When prominent British missionaries made a hue and cry over the supposed debauchery and cruelty of human sacrifice in the chariot festival of Jagannath, Charles Buller, then Commissioner of Cuttack wrote back to the Court of Directors of East India Company that he had passed several times between ‘Cattach and Jaghanath ... without seeing many objects of wretchedness’ and provided an eye witness account of ‘Rath Jattrah’ in which there was ‘but one instance of immolation under the wheels of the car’.  He pointed out that the Hindu religion enjoined no duty on anyone to throw himself under the wheels of the Rath and added, ‘indeed the infrequency of the act is the fullest proof, I conceive, that it is not an act of duty prescribed to any sect of Hindoos whatever.’ (Arun Shourie, Missionaries in India, p.129)

Mishra says, “Think of it, here is a lord who has meals like humans, has mood swings, marries every year, has nautch girls (devdasis) for entertainment, falls ill and also goes on this grand vacation, which people from across the world attend. All this despite the fact that he looks nothing like the god elsewhere and no one except Hindus are allowed in the temple throughout the year, except during the festival. Though most, except the Rath Yatra, was a way of worship back then. To a European it would have nothing less than a big opera, especially one who had already decided that the religion was unworthy!”

In any case, from the time the British observed the ‘terrifying’ sight of the Lord on his gigantic chariot, the word ‘juggernaut’ entered the English language and became synonymous with any great force that crushes everything in its path.”

The low opinion of the ritual only briefly changed under archeologist Cunningham, who based on secondary sources (which could be Pandas of the Mandir), and the fact of caste rule suspension deduced Jagannath to be a Buddha reincarnation. In fact, his theory was also based on the legend that Puri Temple could have been built on the site that once belonged to a Buddhist site. Cunningham in his journey had finally declared Jagannath “not at all Brahmanical, it is eminently characteristic of Buddhism.” The explanation found acceptance by authorities like the Sri Lankan Buddhist scholar Ananda Coomaraswamy.

Buddhism or not, says Parhi, “the sense of equality that the Rath Yatra help spread with its no-sect rule became the single most reason that even East India Company, which valued it for political and economical reason (the tax imposed on Puri pilgrimage was a source of income for them), behind the special treatment afforded to the festival that was never banned during the British Raj either.”

In fact, the very reason that got Rath Yatra the negative connotation paved the way from its global popularity and curiously, say the experts, “it is at a time when there is no mahaprasad.”

Fascinatingly, the bhog in the days preceding the Rath Yatra and during those nine days is a far cry from the delicious mahaprasad. The reason for this is the absence of Lord in his temple. Yes, one can still get the khichuri and dali, which comes from the temple of Alakhnath (Jagannath’s other representative in Brahmagiri), but the two things that the Rath Yatra is known for today, and can be had at the Gundicha Temple or Mausima Temple in Baripada is podo pitha (a steamed cake made of rice) and the gudo ladoo (boondi ladoo made of jaggery).

You can, ends Pahri, “take rice from anywhere, soak and grind it anyhow and yet the pitha you taste delicious, much like cinnamon in Christmas.”