Return Of Baahubali: Will The Final Punch Live Up To Expectations? 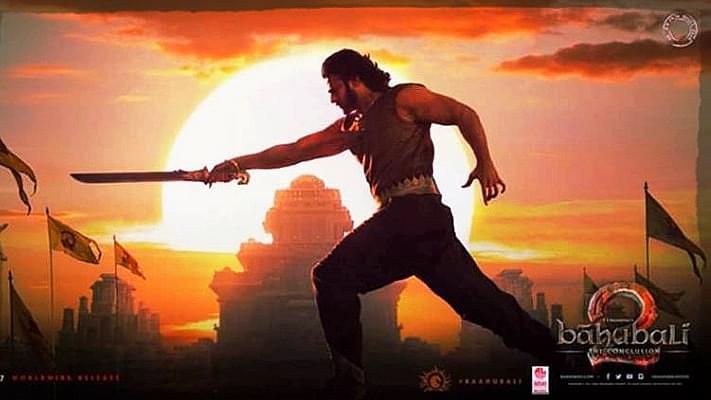 “Why did Katappa kill Baahubali? ”

The mystery and the resulting question became even more popular than the dialogues in Baahubali: The Beginning (2015), thanks to the open-ended conclusion that left viewers guessing for two years. The mystery is about to end. What was Baahubali able to achieve?

Let us revisit director S S Rajamouli’s most spectacular work and some details.

S S Rajamouli has been one of the best directors in the Telugu cinema industry in the recent times and the most frustrating. Why? He often relies more on style than substance. His movies are visually brilliant, and he knows how to set up the big moments and the thunderous action scenes.

In Baahubali: The Beginning, he could pull off the big moments and the thunderous encores.

The questions before the film was released: would Rajamouli be equally effective in building the intimate moments, the bonding and the relationships? Would it, like most period epics, be just another sound, fury and sword show with no real substance? Would he be able to strike a perfect balance between spectacle and drama? Is there something more to Baahubali beyond the spectacle, sound and fury?

Is Baahubali just a hollow celebration of grandeur? NO. The grandeur dominates, the visual brilliance often overshadows the characters, but — there is some good writing.

The person making the difference here is Vijay Prasad, Rajamouli’s father, whose writing gives depth to the movie and elevates it.

You are swept in by the stunning desert scenes, the huge palace sets, the massive Shiva statue, yet you do not feel anything for the lovers. Their love gets dwarfed by the sets.

Then, in Chhattrapati (2005), the mother versus son angle does not really have the emotional wallop of a Deewar (1975). Chhattrapati scores in the scenes where the character of Prabhas emerges as a leader of the people, stamps his authority, takes on the mafia, but the emotional scenes again do not really have that depth he had shown in Maryada Ramana (2010), where he actually deglamorises the Rayala Seema genre of movies. The hero, Sunil, in Maryada Ramana, is an average Joe, using his wits to survive, caught in a deadly conflict he has no relation with. So, when Baahubali: The Beginning was being released two years ago, there were mixed feelings.

Technically, the movie is a feast, just the kind big screens are made for, be it the massive water fall, the hero Prabhas taking the jump across it, the stunning Mahishmathi kingdom sets, or the final battle scene, it reveals grandeur in every frame. It was larger than life, in every moment, even in its depiction of nature, as can be seen in the huge waterfall that becomes an exploration for the hero; or Mahishmathi, with its massive palaces and streets rising out of the plains, taking one’s breath away with its sheer scale. Even the two main characters, Baahubali and Bhallala Deva, the super hero and super villain, respectively. Two giant men, battling it out in a deadly rivalry.

The visual brilliance is seen even in the smaller moments, the hand lifting the infant out of the water (a superb shot), that has since then been mimicked in countless advertisements. Right from that brilliant opening shot to the final battle scene, as an end viewer, you are just sucked into the grandeur, the sword fights, the battle scenes, the intrigues. And when it ends, you step out asking the question — “Why did Katappa kill Baahubali?”

Shivudu a.k.a. Baahubali is, in many ways, a super hero. He lifts a huge Shiva Linga and carries it on his shoulders, jumps across a waterfall, stops a massive falling statue with one hand and takes on a group of soldiers single handedly. Yet, there is childlike mischief and vulnerability in him. It helps that Prabhas is able to combine mischief and power effectively.

In one way, Baahubali’s story resembles that of Krishna’s. Born into a royal family,  but forced by circumstances to spend life in the countryside under the care of foster parents and  having to confront his own destiny. The opening scene of Sivakami (Ramya Krishnan), carrying the infant Baahubali, in the river,  is similar to Vasudeva carrying the infant Krishna across the Yamuna in thunderstorm.  That scene, where a dying Sivagami holds the infant Baahubali in her hand, out of the water, is memorable.

Gokul here is the thick forest, flanked by a giant waterfall, and Yashoda here is Sanga (Rohini), a tribal lady. Like Yashoda, she worries about Shivudu, worries about his tendency to spend hours looking up at the water fall, wondering what lies beyond.

Sivudu is shown playing with his friends, lazing around, and spending his time, looking up at the waterfall. The use of Hindu religious symbolism and imagery is noticeable. In one of the movie’s most memorable scenes, Shivudu lifts a massive Shiva Linga, and places it under the waterfall. He does it to fulfill his foster mother’s wish of doing abhishekam to the Shiva Linga. He does not want her to be too tired. Shivudu’s foster parents and friends are awe struck by his massive strength, but the priest (Thanikella Bharani), is not. He is the first to recognise the super human in him. In a sense, this has another reference to Hanuman, the hero unaware of superhuman strength he has, until reminded of it.

Shivudu lives in his own idyllic and blissful world, his only obsession is to find what lies on top of that huge waterfall, and the wooden mask, that falls from it. Until he sees the beautiful maiden Avantika (Tamannah) near the waterfall, and begins to follow her, taking a giant leap across the waterfall yet another memorable scenes in the movie. He finds out that the beautiful maiden is actually part of a secret revolutionary group, battling against the King’s tyranny. Here comes the weak link. The character of Avantika, which is not clearly delineated.

Romance has never been Rajamouli’s forte, and the love story between Shivudu and Avantika is clearly the worst part of the movie. Mercifully, Rajamouli does not devote too much time to the romance, which otherwise would have derailed the movie. It is post the clumsy and rather hasty romance that Baahubali actually comes into its own.

The villain of the piece, or Kansa here, Bhallala Deva (Daggubati Rana), owns the part.

In true Kansa style, he has grabbed the throne, and has begun to unleash a reign of terror on his citizens. Devaki here is Devasena (Anushka), not his sister, but the deposed queen, imprisoned in a tiny cell. And much like Devaki, she hopes that her son would be back one day, and liberate her from the misery around. Dressed in an old and fading saree, hair speckled with dust, face greyed with the black soot and eyes dried of tears, Anushka suits the character of the wronged Devasena, perfectly well.

Bhallala Deva is every inch the archetypal tyrant, more in the Duryodhan mould, a great warrior, but utterly arrogant, self-centered and insecure. He is aided by his paralysed father, Bijjaladeva (Nassar) and his equally wicked younger brother Bhadra (Adivi Sesh), both characters referencing Shakuni and Dushashan.

Bhishma here is Katappa (Satyaraj), a loyal soldier, faithful to the throne.  He hates his wicked master, is sympathetic to the imprisoned Devasena, but can’t betray his Dharma. Having served the throne of Mahishmati loyally, he cannot go against it and yet he can’t bring himself to accept the tyranny and oppression unleashed by Bhallala Deva. A man torn between his Dharma, loyalty to the throne and  Mahishmati, and his own conscience, that is repelled by the atrocities.

And Katappa is the one who discovers that the heir to the throne is alive.

Which is when we come across the titular character,  Amarendra Baahubali, in the flashback.  He is everything a hero should be, righteous, brave, fair in conduct and a great warrior. A true follower of Dharma, who puts other’s interests ahead of his own, and treats humans as humans.  In fact this is where the contrast between Baahubali and Bhallala Deva lies. Both are mighty warriors, both are of royal blood, both are skilled. But Bhallala Deva is self-centered, he cares only for his own objectives, does not mind if others die in the process.

Bhallala is greedy for power, and for fulfilling his own ambitions, egged on by his equally wicked father Bijjala Deva. However, while Bhallala Deva is strong, powerful, he lacks the basic empathy for others. For Amarendra Baahubali, every human life is valuable, every human being is worthy of respect. He has no hesitation in dining with Katappa, even though the latter is of a lower caste. For him the only thing that matters is Katappa has faithfully been serving the cause of Mahishmathi.

The contrast between Baahubali and Bhallala Deva is well-established in the climactic battle where the villainous Kalakeya and his barbaric hordes take the citizens of Mahishmathi hostages. Their approach is totally different. Bhallalla Deva plunges headlong into the battle, with his Ratha, to attack and kill Kalakeya. He does not care for the hostages. For him, they are expendable, as long as he gets to achieve his basic objective. Baahubali, on the other hand, ensures that the hostages are out of harm’s way before attacking Kalakeya. While his intention of defeating Kalakeya is strong, as strong as Bhallalla’s, he is equally concerned that the ordinary citizens should not become a collateral damage.

Shivagami (Ramya Krishnan in a powerful performance) declares him to be the rightful ruler. A true ruler puts the welfare of his kingdom, the well-being of his subjects and their safety ahead of his own concerns. For Baahubali, mere victory in war is  meaningless if it comes at the cost of his people’s lives.

The battle scene brings a wonderful depictions of the different vyuhams, especially the Trishoolam formation to outwit the enemy; the fluttering saffron flags, armies marching in order, different weapons, a spiked mace that retracts itself and a chariot fitted with spikes; the grand display of Hindu traditions — in the puja before the main battle starts, the priests invoking divine blessings and the dance performed before the inauguration of the statue.

Baahubali is a throwback to the days of Chandamama and Amar Chitra Katha — of mighty heroes, wicked villains, beautiful damsels, palace intrigues and wars, heroism and villainy, jealousy and the lure of power. Its portrayal of Indic traditions and the concept of Dharma made it a memorable film for all times.

Will Baahubali 2: The Conclusion be able to achieve more?