Sati: Tragedy Through The Ages 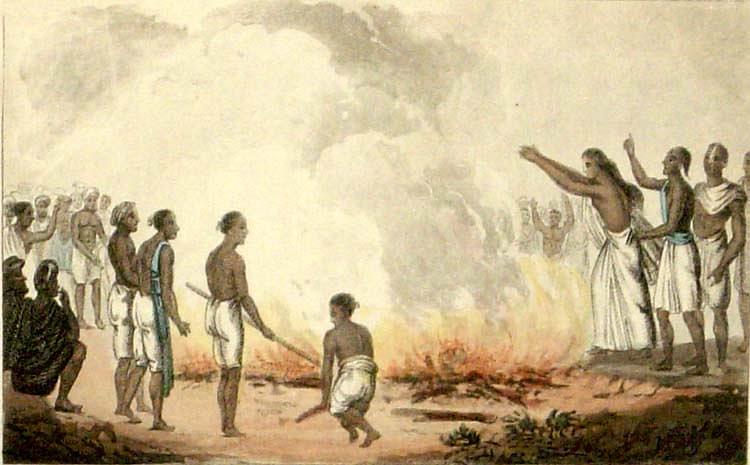 Sati was arguably the most horrific practice amongst all in India. Given below is a brief history of the ritual. Where did it most likely originate from? In which regions was it practised more than others? Presented here are sombre answers to those questions.

Grhyusutras, composed during 600-300 BCE, describe a number of rituals, but Sati is not mentioned in them. Even Gautama Buddha, who condemned even animal sacrifice, does not say anything about Sati which is quite curious and can only be explained if the Sati custom was non-existent during his times. Even Yajnavalkya doesn’t mention Sati.

Although we have late 4th century BCE evidence from Greek historians, Sati did not grow popular before 400 AD. A very early attested case of Sati is of the wife of Goparaja in 510 AD. Literary evidence from the works of Bhasa, Kalidasa, Bana, Sudraka and Kalhana shows that Sati custom was getting gradually popular in the royal families of northern India during the period of 200 Ad to 1000 AD. It is however peculiar that no records of this period refer to actual cases of the practice.

Very few of earlier bards of Rajputana mention about Sati in their songs. This is indeed strange as they would not have failed to mention the cases of Sati, when they were writing paeans of valor, character and bravery of kings and their consorts of Rajputana. Only few documents refer to Sati even in Rajputana where it became a prevalent custom later on. The earliest record is of Mother of the Chahamana king Chandamahasena becoming Sati in 842 AD. The next available case is of Sampalladevi of Ghatiyala in 890 AD.

We have no other recorded case of Sati in Rajputana till 1000 AD. Kashmir is of course an exception as Kalhan in his magnum opus Rajtarangini mentions about the practice in detail. Only after 1300 AD, Sati became an observed custom. Bhandarkara lists 20 cases of Sati in Rajputana between 1200 ad and 1600 AD, most of them being from royal families.

Hiralal, in his book Inscriptions from Central Province mentions about stones near Sagar which record cases of Sati between 1500-1800 AD, most of them belonging to the weaver, mason and barber classes.

Epigraphia Carnatica talks about 11 cases of Sati between 1000-1400 AD and 41 cases during 1400-1600 AD. Majority of them belonging to war fighting communities of Nayaka and Gauda castes.

However, and sadly, it gradually became a firmly-established and ubiquitous practice . At the death of almost every Rajput king, those among his widows who were not with child or who were not required to act as regent, used to ascend to the funeral pyre. Colonel James Todd, in his Antiquities and Annals of Rajputana mentions that when Raja Ajit Singh of Marwar died in 1724, 64 women became Sati. When Raja Budh Singh of Bundi died, 84 women became Sati.

The 3rd Sikh Guru Amardas condemned Sati custom and prohibited it among Sikhs. But, it soon became a custom amongst the Sikh aristocracy as well. When Raja Ranjit Sigh died, four queens and seven concubines became Sati. 3 women became Sati with death of Maharaja Khadag Singh, 5 with Basant Singh, 11 with Kishori Singh and 24 with Maharaj Hira Singh.

As Marathas claimed Rajput descent, they couldn’t remain impervious to it. But, Sati was an exception rather than rule with the Marathas. Only one of the wives of Shivaji became Sati. Same was the case with Rajaram. Among the Peshwas, only the widow of Madhavrao I, Ramabai, became a Sati. Humayun wanted to prohibit Sati for widows who had passed the child bearing age. But he did not take any step towards it.

Akbar appointed inspectors to see that no force was used to compel widows to become Sati. Altekar writes, “That the practice of Sati was mainly a medieval development is also proved by the circumstance that its detailed procedure has not been described even by those few late Smritis, which recommend the practice. We get detailed information only from some late medieval Puranas and foreign travelers. The ritual is described in detail only in very late digests like Nirnayasindhu and Dharmasindhu written after 17th century”

Was any force exercised to compel unwilling widows to become Sati? A straight reply is impossible to give. Yes, in some cases, unwilling widows were forced to burn themselves. Kalhana has given such example of Queen Garga and Didda in Rajtarangini. Niccolao Mannuci talks about one such case in his book, History of Moghul Dynasty in India where he himself saved one such unwilling widow. Francois Bernier writes in Travels in the Moghul Empire about a child widow of 12 being burnt against her will. (Page 363). But in majority of cases, widows were willing participants of Sati.

Epigraphia Carnatica mentions Debakke, a widow in 11th century, who did not listen to her parents’ plea to not become a Sati. Muktabai, the daughter of the great queen Ahilyabai, became a Sati in 1792 despite repeated pleas and requests from her Mother to not to take such a step. Jean Baptiste Tavernier writes about a widow of 22 yr old who went to the governor of Patna to obtain permission for Sati and how she held her hand in the flame of a torch till it was burnt completely to convince the officer that she was not afraid of fire. Ibn Batuta writes in his Rihla about how he fainted on seeing the unbelievable courage of a widow who smilingly embraced the devouring flames of the funeral fire. (Page 191). Similar accounts have been mentioned by Bernier, Pietro della Valle, Mustaqi and many others.

What was the percentage of widows who became Sati, when it started getting fervently recommended by later Puranas? It is difficult to answer for the period of 1300-1800 as there is no statistics for it. There is no doubt though that it was high in the warrior families of Rajputana, where the percentage may have been as high as 10%. As far as the general population is concerned, perhaps one widow in 1000 became a sati when the custom was in its greatest vogue. But we are taking an educated guess here.

Even if we suppose that the actual number. was twice the official figures, it is quite clear that only an infinitesimal number of widows in the general population were becoming Sati in Deccan and Central India.

In Bengal, Sati was far more prevalent. A look at the number of Satis during the years 1815-28 AD

The above table shows that the percentage of Satis in Bengal was much larger than even in Benares which was the greatest seat of orthodoxy. The annual average of Satis in Calcutta division was about 370. This division was at that time having double the population of the Bombay presidency and its statistics too were compiled much more accurately. It would therefore appear that Satis were twice as common in Bengal as they were in Bombay.

Most of the Satis in Bengal and UP were Brahmins. It is clear that the lifting of the canonical ban on the Brahmin widows to become Satis had greatest effect in Gangetic plain. Available statistics clearly show that outside ruling and priestly families, the custom did not make a wide appeal to Hindu community.

So, the question is why a practice which had almost become extinct got a fillip? When Islamic invaders started taking sex slaves, it created a unique problem to Hindus. When they used to come to know that defeat is inevitable, Rajputs used to wear kesariya safa and march to the war for the final showdown. Their wives used to burn themselves on pyre so that thought of their becoming sex slaves will not weaken the males’ resolve to face the invaders. The women who used to commit jauhar were given status of deity and bards used to compose legends about their valor and composure in the face of certain death. This made Jauhar glorified and gave a fillip to Sati too.  And soon the number of Satis showed a steady upward increase.

But it is certainly clear today that the “tradition” of sati was used cleverly in later years by the widow’s late husband’s household for purely material objectives. Hindu men turned the logic round on its head to proclaim proudly that this proved that Hindu women were true goddesses.

The great Bengali writer Sarat Chandra Chattopadhyay writes in his seminal 1917 essay Narir Mulya (The Value of a Woman): ‘This is the country where women go and sit on the funeral pyre with smiles on their faces, rest their husbands’ lotus-like feet on their lap, and burn to ashes with a cheerful face!’ If so, asks Sarat Chandra, ‘why was the widow drugged heavily right after the husband’s death?… When she was put on the pyre, she was strapped down in a cage made of raw bamboo, lest the sati decides to escape the pain of getting burned alive! Thick smoke used to be created through the burning of ghee and coir, so no one could see her terrible torture and feel fear! Countless drums would be beaten and conches blown loudly so no one heard her cries, her screams, her pleas for mercy!’

To quote from a piece by Swarajya’s editor Sandipan Deb: ‘Sarat Chandra points out that more the depredations piled on the woman, the more the Hindu man went about proclaiming her as goddess. After the British outlawed sati, the pundits came up with a new stratagem: every form of hardship was placed on the shoulders of the widow so she could become a devi daily in a little way. No ornaments, only one meal a day, back-breaking work, the coarsest of clothes. ‘But the devi is not allowed to attend weddings… they are not called for any happy ceremony, they are only called to cook the pind after funerals.’ Thus were our goddesses worshipped.’