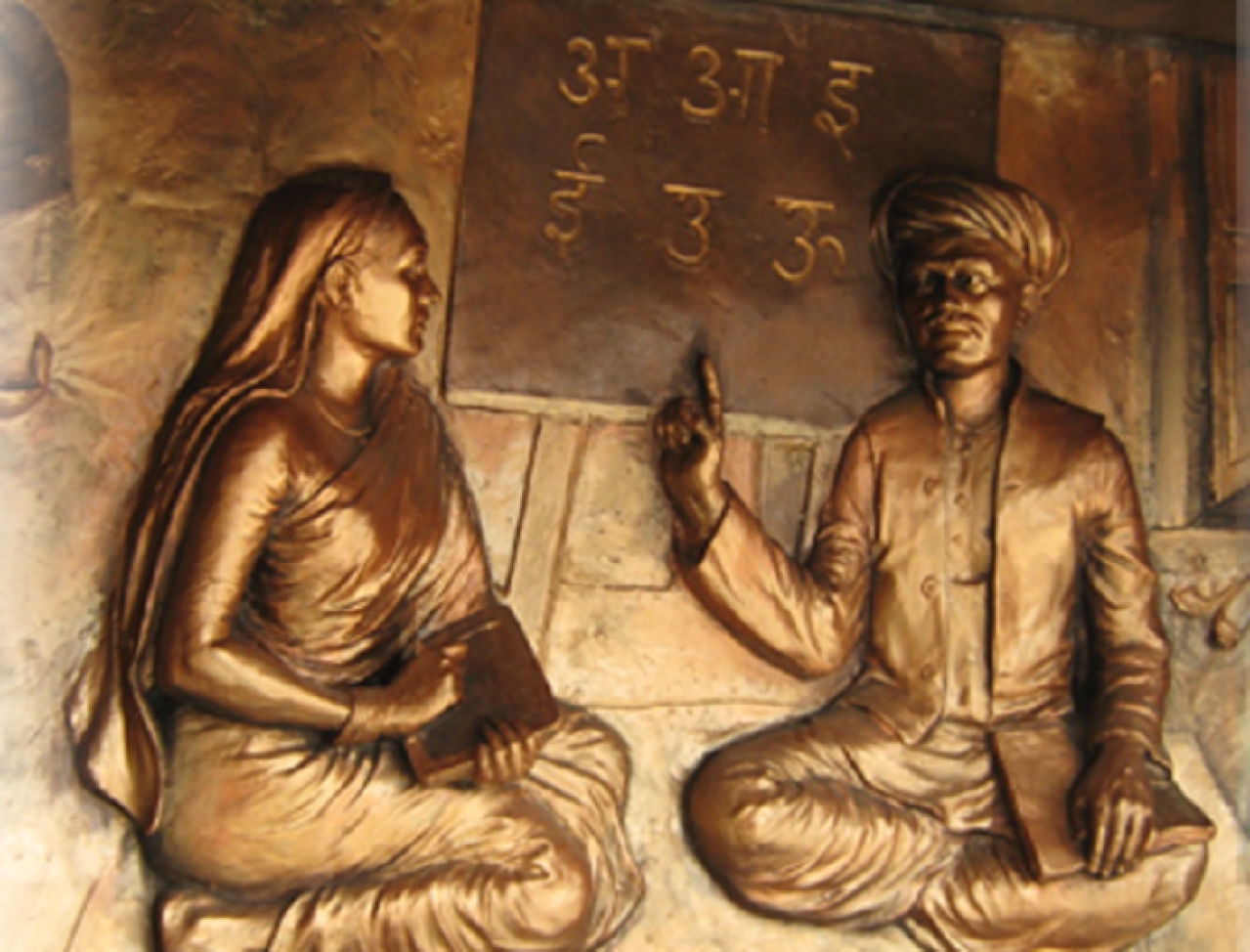 Savitribai Phule (1831-1897), was a radical exponent of female education and someone who fought for women’s liberation. During 19th century, when remarriage was considered a taboo, Savitribai helped countless widows to find shelter, especially those who had become pregnant, often times being raped by family members who found them an easy prey.

Savitribai and her husband Jyotiba Phule set up Balhatya Pratibandhak Griha, a shelter to prevent infanticide. They adopted a young child of such a widow and named him Yashwantrao. At a time when shaving off the widow’s head and forcing her to wear a red sari and staying mostly indoors was considered a socially accepted norm, Savitribai fought against this practise by persuading the barbers to refuse shaving the heads of these women.

Jyotiba and Savitribai were an original guru-shishya couple. It was Jyotiba who took upon himself to educate his wife first before the couple decided to educate others, especially women and children of lower castes. But it was as late as last year that the Government of Maharashtra recognized Savitribai Phule’s contribution to education and renamed Pune University in her name.

It is not surprising if most of us are unaware of Jyotiba Phule and his wife Savitribai’s contribution in the field of education. The government sponsored Sarva Shiksha Abhiyan under the RTE (Right to Education) Act was a concept which Savitribai had promoted more than 150 years back by giving allowance to children lest they drop out of school.

A young student, inspired by her work, had asked for a library for her school instead of gifts for herself. Jyotiba Phule realized that education was the best path for the marginalized and oppressed sections of the society to come up in life. Rather than confront the system which promoted social inequality he decided to educate the backward classes and women.

Jyotiba was quick to recognize the gaps in Macaulay’s Downward Filtration Theory of Education. Macaulay believed that it was easier and more suitable to provide higher education to the higher classes than giving elementary education to the masses.

Jyotiba argued that the upper classes would never be interested in educating the lower class as it would undermine their superiority and hence it was important that the then British Government took upon itself the role of providing education to all. He fought for a large portion of the revenue to be spent on building schools and for providing free education to women.

Savitribai’s passion for female education began by starting a school in Maharwada in 1847. Later on, in 1948, India’s first school for girls was started at Bhide Wada in Budhwar Peth, Pune, and Savitribai was nominated as its first head mistress. She took on the job of a teacher at the time when teaching of girls was supposed to be an unholy, unheard of thing, moreover an affront to traditional honour. She had to endure cow dung and stones being thrown at her as people all over opposed the idea of girls being educated. A report in ‘The Poona Observer’ on 29 May, 1852 commented-

The number of girl students in Jyotirao’s school is ten times more than the number of boys studying in the government schools. This is because the system for teaching girls is far superior to what is available for boys in government schools. If this situation continues, then the girls from Jyotirao’s school will prove superior to the boys from the government schools. They are quite confident of doing very well in the forthcoming examinations. If the Government Education Board does not do something about this soon, our heads will hang in shame if the world perceives these women doing better than we men.

Jyotiba Phule was belatedly recognized as the father of India’s social revolution and was called Mahatma. Savitribai was largely ignored by our own historians and government. While she was written about by a few Marathi authors, most of India has no idea of her contribution to education and the fight against caste discrimination. It was the age where society strongly believed that teaching women to read and write would disrupt the society. She trained women from lower castes to become teachers while also promoting the concepts of basic hygiene, nutrition, health and good clothing.

Savitribai was a strong critic of the orthodox ideologies of the times. Using her writing skills, she wrote an essay titled Karz, to discourage people against the debt trap of taking loans for marriages and festivals.

It is unfortunate that the couple, who fought for women’s education and Dalit rights are hardly known in India. Crawford market may have been renamed as Jyotiba Phule market and the University in Pune now named after Savitribai but India’s first social reformer couple continue to be strangers to most in India. Devoted to social welfare, Savitribai, while taking care of patients during the third bubonic plague, herself got the disease and died in 1897.

#2 The Plight of the Shudras

Tortured by those who are called ‘Gods of earth’,
For more than two thousand years,
The plight of the Shudras
Is to be in constant service of the Brahmins
The heart screams in protest
Seeing their plight and agony,
And the mind is numb
Searching for an answer
The path is Education,
For Shudras to walk
For it is only education which would allow humans
To free from an animal-like existence

A graduate of IIM Bangalore, Vikrant Pande’s day job is spearheading the TeamLease Skills University at Baroda. His keen desire to see his favourite Marathi books being read by a larger audience saw him translate Raja Ravi Varma by Ranjit Desai (Harper Perennial). He has since translated Shala by Milind Bokil, and is currently working on several other books. He is fluent in many languages including Marathi, Gujarati, Bangla, and a smattering of Tamil and Kannada.
Get Swarajya in your inbox everyday. Subscribe here.
Tags:
157 Shares