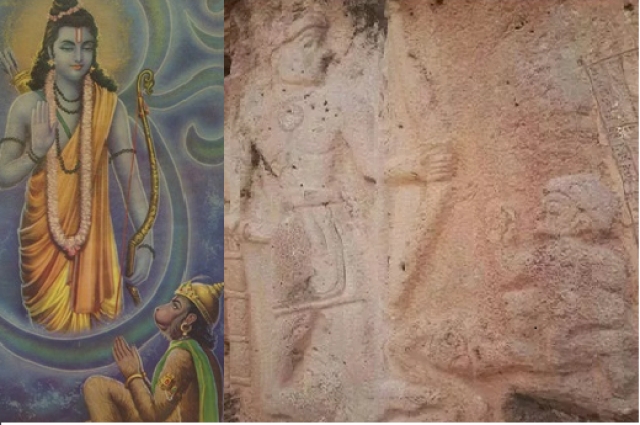 Does the mural really depict Sri Rama and Hanuman? Looks more of a sculptural Rorschach than anything else.

Recently there has been a lot of sensation in the media over the speculation made by a a team from an organization called Ayodhya Shodh Sansthan linking a sculpted mural in a rock cliff in Iraq to Ramayana. The expedition was accompanied by among others, Indian ambassador to Iraq, Pradeep Singh Rajpurohit. Naturally the media reported this news and many Hindutvaites have been happy to see an old fantasy of a world Vedic empire getting vindicated — the fantasy of the P N Oak type.

This fantasy of a world-wide Vedic empire is a consistent weakness in the worldview of certain Hindutvaites. P N Oak — an ex-INA freedom fighter turned ‘historian’ — had a life-long obsession to prove that Vedic Dharma once existed throughout the world. Soon many claims were made, many of them laughable but not for those who considered them to be true. Thus Jerusalem was Yadhusailam, Canterbury was Skandapuri, Vatican was Vadika - a city of gardens, Incas were Ishvaku, Aztecs were Aastikas and California was Kapila-Aaranya.

We see what we love to see. Consider the following picture. What is shown here is a purported artistic depiction of a stele of the pre-Colombian era from Guatemala.

The publication I have before me — Dr Sharad Hebalkar’s Essays on History of Pre-Columbian America — claims that this is actually a depiction of Ganesa — notice the trunk in the face — and Siva, His father in the sky. However, if one looks at these particular types of steles, which are quite abundant in the pre-Colombian sculptures of South America, one can see that it is not so.

Still if one wants, s/he can claim that the stele actually shows Bhagiratha and the Ganga with Siva getting it to the earth through His matted hair. Or one — deluded to the brim of his cranium with ‘Ancient Aliens’ serial — can also claim that it actually shows extra-terrestrial origins of our civilizations. All these are actually nothing but archaeological Rorschach figures. Taken out of their archaeological, historical and cultural contexts, these artifacts get interpreted from the historical and cultural contexts of the interpreter.

In the case of the ‘Rama and Hanuman’ mural the same fallacy has happened. It is at best a sculptural Rorschach. In this context, let it be said that it was a person using the Twitter handle of @TrueIndology — whose account has yet again been suspended by Twitter — who publicized and punctured the so-called Rama connection by pointing out that it was actually an ‘Akkadian warrior tramping a defeated Hurrian while another Hurrian begs’.

By building elaborate ancient world histories based on such illusions, we are undermining a more important, serious cause that Hindutva should serve.

However, these cultures need not have been derived from the Vedic culture to be protected. They have to be protected because they represent human diversity and validate the spiritual unity of humanity through theo-diversity. In fact ‘unity in diversity’ is the basis of Hindutva.

And hindered spiritual communities have looked at India — naturally and spontaneously for their protection — for validating them. Let us consider, for example, Umbanda, an African religion from Brazil. The communities practicing this spiritual tradition claim that their tradition can be traced back to the sacred Aum of Hindu Dharma. Here, what is at play is not as much a historical fact, as a realization of spiritual kinship with the natural religion of India. Thus, India becomes the protectress of the world’s natural and aboriginal spirituality.

Incidentally, the Sangh realizes this. It has been conducting conferences of ‘World Elders’ belonging to various indigenous traditions. Dr Koenraad Elst traces the spiritual inspiration for this series of events to the deep thinker and magnificent Hindutva intellectual, Ram Swarup (1920-1998). Yashwant Pathak, the co-founder of the International Center for Cultural Studies (ICCS) — along with Prof S W Bakhle — acknowledges that Ram Swarup was one of the inspirations. Ram Swarup, rather than claiming a common historical origin (with India being that origin), anticipated a grand spiritual validation of the theo-diversity of human species. He embraced both monotheism and polytheism with his roots in the Vedic dictum of 'unity without sacrificing the diversity'.

As against this, the approach through historical (and often) pseudo-claims of a Vedic world civilization for uniting the natural spiritual traditions of the world is bound to fail. What is more important in Iraq today is to network with the Yazidis and provide them the comfort that there is a cousin spiritual tradition and people supporting them rather than inventing the footprints of Rama in Iraq.