The Amur Falcon: A Remarkable Story Of Nagaland’s Flight To Conservation 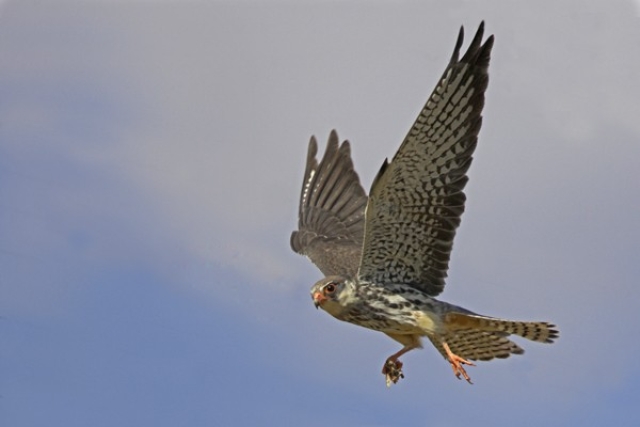 The next weekend would be a great time to visit Pangti village at Doyang in Nagaland’s western-central Wokha district. This village, the venue of the inaugural edition of the Amur Falcon Conservation Week & Festivals from 8 to 10 November this year, tells a happy and classic tale of hunters turned ardent conservationists.

Till 2012, people of Pangti and villages around the scenic Doyang reservoir used to kill nearly 1.5 lakh migratory Amur falcons that would flock to the area every winter. They would shoot or trap the birds in huge fishing nets strung across trees and poles. The raptors breed in southeastern Siberia and northern China, and migrate in millions across India and then over the Indian Ocean to southern Africa before returning to Mongolia and Siberia, making their 22,000-kilometre migratory route one of the longest amongst all avian species.

The raptors start arriving at Doyang, considered by ornithologists as one of the largest congregation of amur falcons, in October-end. Within a few weeks, the area is a happy chatter of these birds which get their name from the Amur river that forms the border between Russia and China. The conservation story has its origins in a visit in October 2012 by noted senior journalist Bano Haralu and conservationists Rokohebi Kuotsu, Shashank Dalvi (a research associate at Bengaluru’s Center for Wildlife Studies), and Ramki Sreenivasan (of Conservation India) to the area to see for themselves the massacre of these birds.

In Bano’s own words, they were “numbed” by the scale and brutality of the killings. It was estimated that about 10 per cent to 12 per cent of these migratory birds were being killed during their stopover in Nagaland. Bano then formed the Nagaland Wildlife & Biodiversity Conservation Trust and formed a team to document the killing of the birds. The appalling images of the birds being trapped and killed sent shock waves among conservationists and nature-lovers around the world and led to calls from various organisations to stop the massacre. Conservation bodies like the Birdlife International, Bombay Natural History Society, and Raptor Research and Conservation Foundation got together to fund a comprehensive project to stop the entrapment and killing of the Amur falcons.

Bano, who belongs to a well-known and illustrious family of Nagaland, persuaded ministers and bureaucrats to put a stop to the hunting of these birds. At the same time, the trust started working among locals and convinced them that the killing of the birds was morally wrong, harmful to ecology and was bringing a bad name to them and the state. Their intensive efforts paid off and in 2013, the village councils of Pangti and the neighbouring villages of Ashaa and Sungro signed a declaration making hunting of Amur falcons illegal and punishable. The trust got the Nagaland government and the local community together to take the conservation effort forward and that resulted in the formation of the ‘Friends Of The Amur Falcon’ campaign that gave the local community a sense of ownership of the conservation effort.

Special lessons were introduced in local schools to teach children all about the Amur falcon and why it was important to preserve the bird. Awareness campaigns were also conducted among the adults, and women were drafted to lead the conservation efforts. Teams were formed to patrol the known nesting grounds of the bird and vigilance was mounted in the local markets where the bird used to be sold. All these paid off, and in a spectacular turnaround, the hunting of the bird came to a total halt from 2013. What’s more, all those who used to hunt the bird or kill them and sell them in the local markets have turned into passionate protectors of the Amur falcon.

Over the last few years, Pangti and other villages around Doyang have started attracting bird-watchers, conservationists and tourists. The locals, with help from the Nagaland government, the trust and others, started operating homestays, got trained as guides for tourists, and started various micro ventures like boat rides, offering tents on hire, and run cookery classes for visitors. These helped boost their incomes and now they have developed a permanent stake in protecting the Amur falcon.

The festival this year, an initiative of the Nagaland government’s tourism department, offers a comprehensive package to tourists: bird-watching, nature treks, nature photography, screening films on wildlife, indigenous cultural events and games, exhibition of traditional handlooms and crafts, adventure sports, a music and a food festival, angling, trekking, boating and many other activities.

Pangti has become quite famous around the world. A 26-minute documentary made by the young filmmaker Sesino Yhoshu titled The Pangti Story (watch the documentary) won the distinguished Golden Beaver Award at the 7th National Science Film Festival in 2017 and also the Best Environment Film (non-feature film category) at the 65th National Film Awards this year.

A visit to Pangti to witness and participate in the festival would not only provide a wonderful chance to witness a successful conservation story, but also support local tourism and put money in the pockets of locals so that they continue to remain protectors of the handsome bird.

Also read: The Race to Save the Amur Falcons in Nagaland, Northeast India