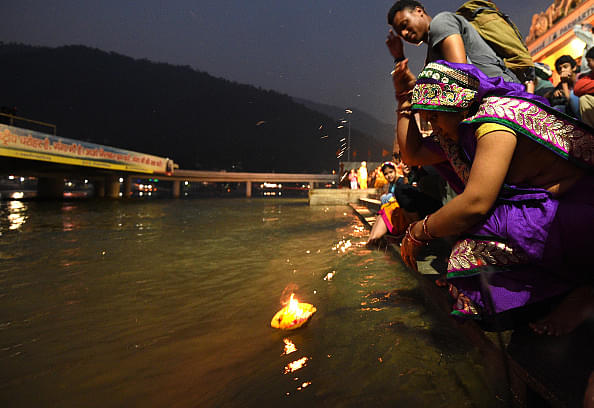 A woman prays as she sets a diya afloat in the Ganges during celebrations of Diwali. (DOMINIQUE FAGET/AFP/GettyImages)

Social justice in India flows from her deeply held spiritual values - which in turn can be traced back to the 'great statements’ (Mahāvākyas) of the Upanishads. These statements provide a spiritual basis for the functioning of democracy, and as pointed out by Dr B R Ambedkar, do not languish in some platonic realm unrelated to life. As history marches on and social stagnation plagues the society, the statements become central to forces of social liberation. This in turn manifests through events that take the form of mythology or sacred memories to join the perennial river that flows from the Vedic dawn - Sanathana Dharma.

In such mythologies, we find Ganga playing an important role. She becomes the symbol of the spiritual stream in which blossoms social justice. The mytho-historical phenomenon happens throughout that cultural matrix we call India. Within the cultural and spiritual context of India, they are not restrained by space and time.

Guru Sant Ravidas (circa 1450-1540 CE) is considered one of the most revered of the gurus of the Bhakthi movement. In the mythologised Indic grand narrative, he is connected to both Kabir and Guru Nanak. He is also considered the guru of the poetess-saint queen Meera. He was born into a family that worked with leather. It was considered a defiled trade and people associated with that were considered untouchables. However, such social discrimination did not prevent Sant Ravidas from becoming one of the most influential mystic-poet seers of his times. There are many legends associated with him, which show how Indic spirituality has, in a sustained way, protests against inhuman discrimination and injustice.

One such legend speaks of Guru Ravidas’ encounter with a pandit. Immersed in his work as a cobbler, Guru Ravidas once gave a pandit, going to the Ganges river for his daily worship, a small coin and asked him to offer it to the Goddess (some versions of the story say it is betel leaf offering). Guru Ravidas also suggested to the Brahmin that Mother Ganges would accept his offering in person. The Brahmin laughed in his mind at what he considered naive uncultured faith of a simpleton. After his bath, ablutions and offerings, he tossed the coin irreverently into the Ganges. Then a melodious feminine voice from inside the depths of the flowing Ganges told the Brahmin to inform Sant Ravidas that his offering was accepted. Then miraculously a hand emerged from the water and gave the Brahmin an unearthly beautiful bangle studded with shining gem stones and told him to hand it over to Sant Ravidas.

When this news spread, some upper caste persons were infuriated. They marched to the hut of Sant Ravidas and demanded to know if Mother Ganga was so pleased with him, then why cannot she appear right in his hut and give him the other bangle, as bangles come in pairs. It is said that Guru Ravidas prayed to Ganga and she appeared - flowing in torrents from the cobbler's water pot, which is used for his work. Then the hand of Mother Ganga emerged from the pot and gave the other bangle to him as the ignorant casteists watched, making them realise the utter falsehood of birth-based ego.

Sreedhara Venkatesa Iyyaval (1635-1720) lived during the time the colonial empire was taking roots. He had renounced the position of Diwan of Mysore principality and had come to a small village called Thiruvisainallur by the banks of river Cauvery. It was a new moon day of the Krithika month – a day people make ritual offerings to the ancestors. As Iyyaval was preparing for the ritual, he saw an old man belonging to the scheduled community, and who was visibly distraught with hunger. The old man asked Iyyaval for food. Filled with Advaitic empathy, Iyyaval gave him the very food he had prepared for the ritual.

Naturally the local Brahmin community was scandalised by the behaviour of the man who was known for his deeply spiritual beliefs. They decided to make Iyyaval pay for what they thought was a violation of their religion. So they told him that he had to take bath in Ganga as a penance for absolving his 'sin'. Local traditions claim that the very same day in the main temple of the village, the priests discovered in the sanctum sanctorum, the items belonging to the scheduled community member as well as the food offered to him by Iyyaval.

Meanwhile, even as the Brahmins demanded him to bathe in the Ganga to wash off the ‘sacrilege’, a well at the backyard of his house, started overflowing with Ganga water. It was a message of the triumph of Advaitic humanism that Sreedhara Iyyaval practised in his life - what centuries later Swami Vivekananda would call as 'practical Vedanta'.

The waters of Ganga, transcending the geographical barriers, thus connect the pot of Guru Ravidas and the well of Sreedhara Iyyaval, emphasising the oneness of humanity and spiritual unity of India. Even as the Narendra Modi initiative is working to cleanse the river, we also face the challenge of removing the pollutants of casteism which disrupts the flow of Hindu life and thought.