The Making Of Adiyogi: An Iconic Inspiration At The Foothills Of Velliangiri 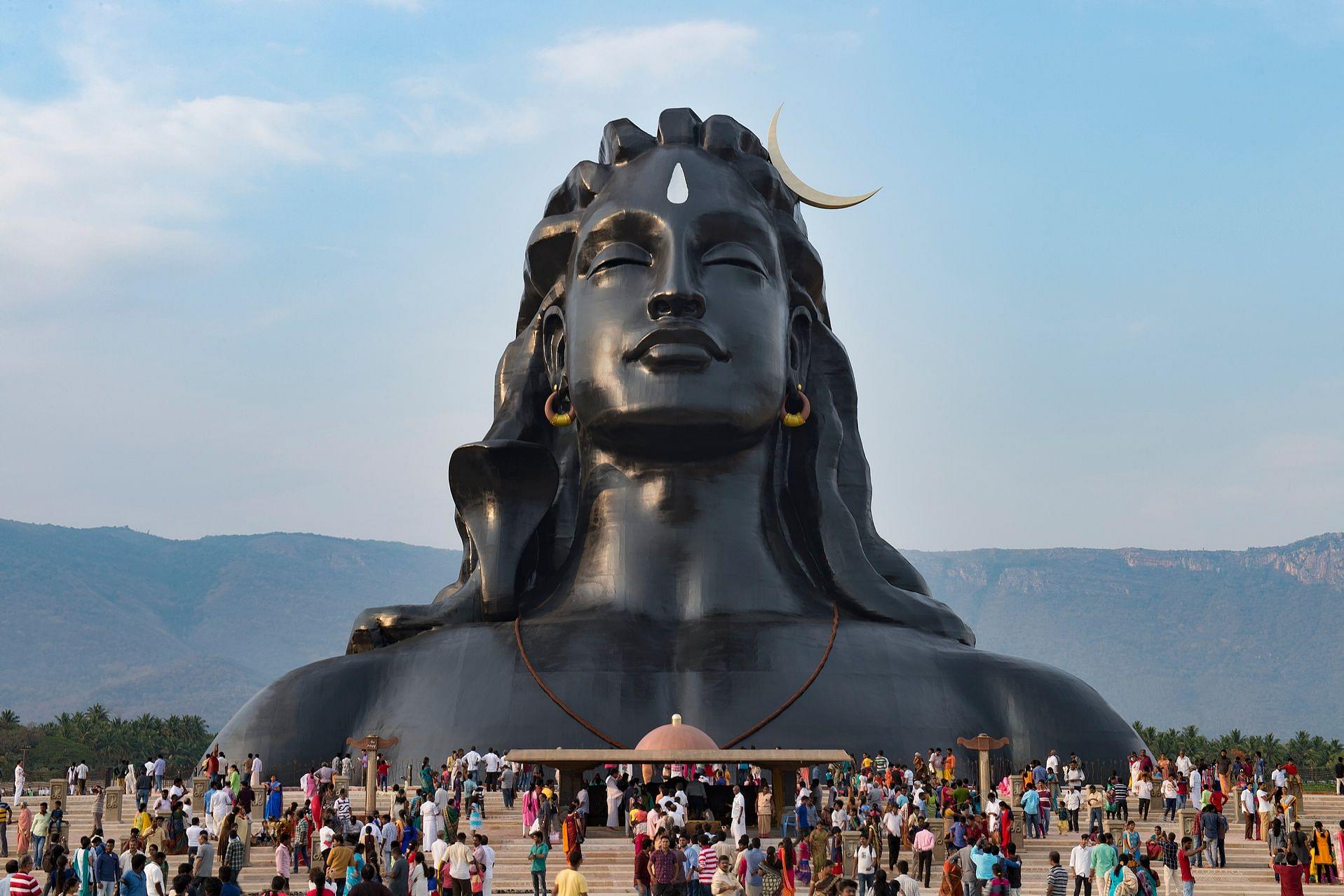 The statue of Adiyogi

The Adiyogi statue was unveiled by Prime Minister Narendra Modi at the Isha Yoga Centre in the outskirts of Coimbatore on 24 February 2017. Soon after, the 112.4 feet tall statue of Shiva was declared the largest bust sculpture in the world by Guinness World Records and listed as an Incredible India destination. Two years have passed since the unveiling of the statue, and the visitors thronging this destination only seem to be increasing.

One would think that in the remote outskirts of a southern industrial city, the visitors would mostly be Tamils from the nearby villages and towns. However, a closer look tells a different story. Groups of traditional Marwari women in their colourful get-up with dupattas covering their heads and large bangles adorning their arms and feet are seen often. So are ladies in Patiala style outfits speaking with a distinct Punjabi accent. The visitors are from all across the country.

Sources at Isha Foundation, the spiritual organisation that built the statue, suggest that the statue daily draws 5,000 to 7,000 visitors on an average. During auspicious seasons and public holidays, this number increases significantly. The Swami Ayyappa season in Kerala saw an increase in the daily footfall to about 10,000 to 15,000. On Sundays and full moon days, about 20,000 to 25,000 devotees find their way here.

The Making Of The Statue

With so many visitors thronging the site, the environment tends to get noisy and chaotic. If you look around, you can see families taking selfies, kids playing, friends chatting, devotees chanting Shiva mantras or meditating. And a lot of different ideas about this statue abound amidst them. Some think it is made of fibreglass or rock, while others speculate that it must have taken at least a few years to build. Only a few know that this statue is made from 1,000 tonnes of steel sheet metal. After accounting for all the excess during the making, the final creation is a 500-tonne steel structure. Modelling of Adiyogi’s face and research into the making technology took three years with the actual fabrication taking only eight months.

For a statue of this scale that is made from steel, a much harder metal to work with, an eight-month fabrication timeline is commendable as per any global standards.

In 2013, when Sadhguru Jaggi Vasudev, founder of Isha Foundation, first briefed the team on this idea they were completely daunted by the task. This was the foundation’s home-trained fabrication team. Many of them had never worked professionally in this field prior to joining the organisation. They were at a loss to know how such a monumental task was to be achieved.

Typically, such large statues use a metal shaping technique. Sheets of metal, shaped as required, are grafted together to create the statue. The metal commonly used is copper as in the case of the Statue of Liberty or the Spring Temple Buddha, the second tallest statue in the world. Some statues use bronze, like in the case of the Sardar Vallabhbhai Patel statue – the Statue of Unity. However, the cost of both these metals is too high and unviable for a private, non-profit organisation like Isha Foundation. Hence, they used steel, a much harder metal to work with.

They also experimented with a cutting edge construction technique, where the metal is carved into precise cubes and assembled into the required form. To understand this technique, they first focused on preparing two smaller sized 21 feet Adiyogi statues. One of these statues is now in the foundation’s Tennessee ashram in the US. Completing these statues gave them the necessary expertise and confidence to take up the bigger mission.

A major issue plaguing the foundation was the lack of adequate number of hands to undertake the task. About 1,000 tonnes of steel metal sheets had to be made red hot, shaped and welded together with quick precision. It needed manpower beyond the few members of the fabrication team. The foundation’s strong grass-root presence in the local villages came to use, quickly training 300 local men to take up the challenge.

In 2016, this rural blacksmiths force and dedicated volunteers of the Isha Foundation began work on the mammoth task of creating a 112-foot tall Adiyogi bust.

Racing To Meet The Deadline

As it happened, Sadhguru had now given the volunteers a tight deadline of eight months to complete the statue, just in time for the upcoming Mahashivaratri of 2017. Some would call such targets crazy, but the volunteers of Isha Foundation have often seen the wonders that truly dedicated people could do under a visionary leadership.

Directed by Sadhguru and supported by cutting-edge digital technology, they decided to create the entire statue in 304 individual cubes of 8 feet x 8 feet. These cubes would be assembled and welded together at the location itself to create the statue. This plan worked well but not at the desired speed. Six months were up and they had managed to make only 40 per cent of the statue. Only two months were left to go.

With only two months and about 60 per cent of the job left, they had to shift gears up several notches. Equipped with the adequate manpower of 300 locally trained blacksmiths, who now had the actual experience of working on the statue, they started working on three big sections of the remaining statue simultaneously. This way, the speed of the work was tripled. However, now there was one gigantic task facing them. Once the three pieces were constructed, they had to be attached with the remaining statue. These pieces weighed hundreds of tonnes and had to be fitted perfectly. It was a task of extreme precision.

A member of the Adiyogi construction core team said, “Imagine a building of 10 storeys. Usually,each storey is constructed one after the other. What if you constructed three separate chunks of three storeys each. Then the work would happen a lot faster, however,you would need to lift the huge three-storey chunks and place them together perfectly.”

Even the slightest misalignment would show poorly in the final outcome. As it happened, a couple of internationally trained experts at such work were available to volunteer, and with their help, this task was completed flawlessly. Now, the Adiyogi statue is out there for everyone to experience – free of even the smallest sharp edge or jag.

After the structure was completed, there was still the task of painting it along with the various final touches. This was also not a simple matter because, apart from the paint, they needed a strong protective coating which would keep the steel from getting corroded due to exposure to the elements. They consulted CECRI, the largest electro-chemical research establishment in South Asia. With its help the most suitable paint and protective coating for the Adiyogi was procured. And considering the strong light shafts illuminating it on the Mahashivaratri night, they settled for a matt finish – dark black colour.

Thus, the work was completed well in the given time-frame for the grand unveiling by the Prime Minister of India.

Since then the Adiyogi is open for public. The lush coconut groves, farms, rural villages and the Velliangiri mountains encircling the towering statue create an enthralling experience. And amidst the bustle of visitors, it is easy to be oblivious to the grit, dedication and cutting edge technology that went into making this monument. However, looking up at this wonder Shiva bust, the visitors may experience awe and inspiration in their hearts, perhaps, something they have never felt before. And this spark could subtly change their entire course of life.

Sadhguru says, “This is not a deity, this is not a temple of some kind, this is an iconic inspiration for people.”