The Military Genius That Was Shivaji 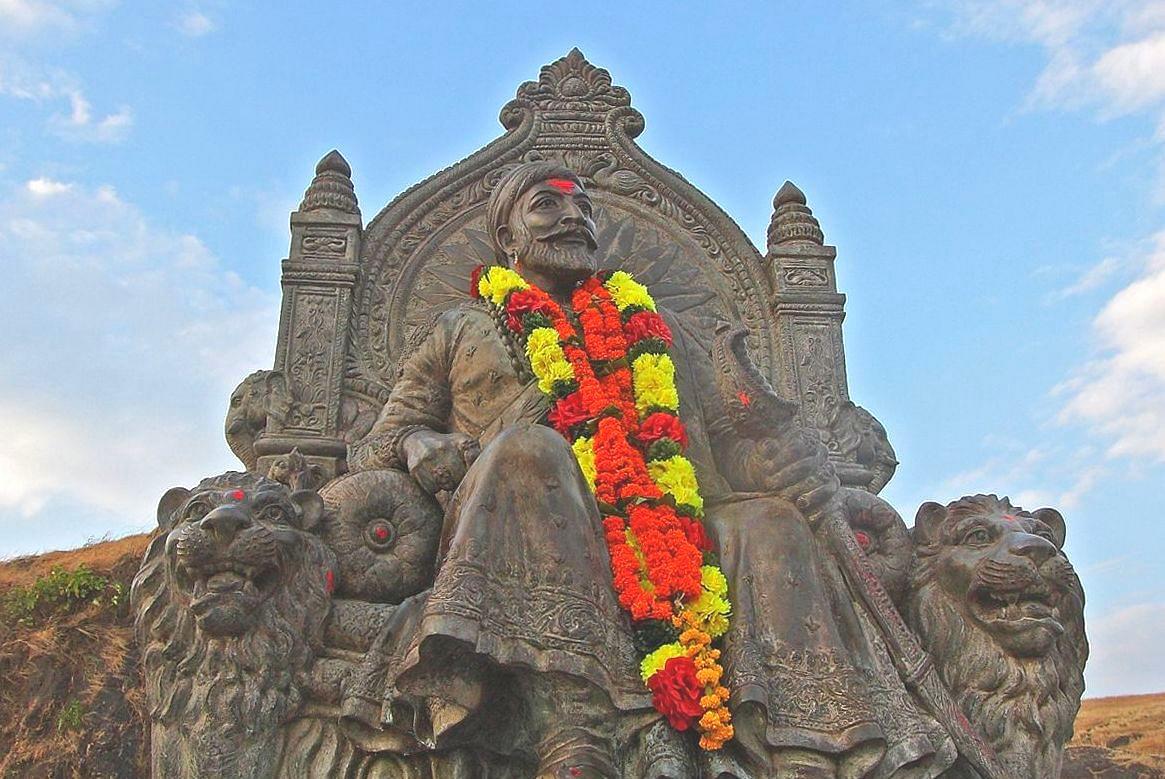 Statue of Shivaji at Raigad Fort

Shivaji Bhonsle, later to be known as the legendary Chhatrapati Shivaji Maharaj, was born into the Maratha-Bhosle clan to Shahaji Bhonsle, a Maratha General, and his first wife, Jijabai, in the late 1620s.

Although Shahaji spent his military life in the services of the Deccan Sultanates and the Mughals, Shivaji – influenced deeply by the religious beliefs of his mother and his study of various Hindu epics – broke away from his father’s path with the vision of Hindavi Swarajya.

By the year 1645, Shivaji – aged just around 15 – began to put his vision into action and take control of multiple forts which were under the possession of Mohammed Adil Shah of the Bijapur Sultanate. The imprisonment of his father by the Sultan forced Shivaji to slow his expansive agenda for a short period of time. But following Shahaji’s release, Shivaji resumed his rebellion and began to exert great control over the Maval region.

The news of a burgeoning uprising reached the ears of Adil Shah and he dispatched his trusted general Afzal Khan to quell the threat of Shivaji and his Maratha army.

Afzal Khan was a leading figure in the court of Adil Shah, known for his ruthlessness in battle and his immense physical strength which was drawn from his imposing height and frame. For his exemplary military achievements in service of the sultan, he was said to have awarded the Adili – a sword studded with magnificent diamonds.

Afzal Khan also had a previous history with the Bhosle clan – having played a major role in the death of Shivaji’s older brother Sambhaji and also having been one of the main protagonists behind Shahaji’s imprisonment and subsequent mistreatment.

The Battle Of Pratapgarh

Shivaji, in comparison, had a much smaller army – 6,000 cavalries, 3,000 infantries and another 4,000 infantry which belonged to his ally, Kanhoji Jedhe. Ever the strategist, Shivaji knew that his forces would be defeated in open battle and hence, took up position in the Pratapgarh fort. The fort was situated in the hills of Jawali and surrounded by a thick forest – suited to Shivaji’s guerilla warfare tactics and virtually nullifying Afzal’s numeric advantages in weaponry and personnel.

Afzal Khan’s plan to induce Shivaji to come out of the fortress was to unleash a wave of desecration of Hindu religious places. His forces defiled the temple town of Pandhapur, home of the famous Vithoba temple, and then proceeded to capture Tuljapur where the sultanate’s army is said to have levelled the murthi of goddess Bhavani to the ground.

While these acts of cruelty failed to force an error of judgement from Shivaji, it did succeed in uniting the Hindu chieftains from the region, led by Kanhoji Jedhe to back the Maratha army and its leader.

The stalemate continued until Afzal Khan sent his emissaries to Shivaji seeking a meeting to discuss terms for peace. Shivaji, knowing of Afzal’s history of duplicity in such meetings, insisted that the meet should be held close to Pratapgarh and not in Wai, as Afzal Khan had previously suggested.

Both leaders agreed to come unarmed accompanied by 10 envoys each, one of whom would be a bodyguard who would stay outside the tent while the terms of peace would be discussed inside. The remaining was to remain ‘an arrow’s shot away’ from the proceedings.

Afzal Khan brought his army to Pratapgarh and set up camp near the meeting site. On the day of the meeting, his armies were kept ready while he proceeded to the meeting with Shivaji with a concealed katar (dagger). Sayyid Banda, Afzal Khan’s trusted bodyguard, accompanied him to the meeting.

Shivaji was prepared for deception. He wore an armour under his clothes and a helmet under his turban. He also carried a waghnakh (tiger claw) in his clenched fist and a thin dagger called the bichawa. His company for the meeting included his trusted bodyguards – Jiva Mahala and Sambhaji Kavji.

Shivaji also planned for the eventuality of an all-out assault by Khan and his armies. He placed his soldiers in concealed positions all around the meeting site. The forces were led by his legendary captains, Kanhoji Jedhe, Ragho Atre, Netaji Palkar and Moropant Pinle.

When the towering Afzal Khan met the much smaller Shivaji, they proceeded towards the customary embrace whence Khan began to tighten his grip, then proceeding to stab the Maratha with his katar. Shivaji’s armour saved him and once he recovered from the initial attack, he proceeded to attack Khan with the waghnakh, disemboweling him and then stabbing him with the bichawa.

Both men rushed out of the tent with Shivaji ordering his forces to attack and Khan crying out in pain. Sayyid Banda attacked Shivaji, striking his turban before JIva Mahal intervened and cut off Banda’s right arm before slaying him.

Shivaji’s other companion Sambhaji Kavji pursued Afzal Khan’s palanquin, which was carrying the wounded general to safety, and decapitated him. The head of Afzal Khan was later sent to Shivaji’s mother JIjabai as proof that the death of her elder son and the torture of her husband had been avenged.

Meanwhile, Shivaji launched a full-fledged assault on the Bijapur forces. Trained in swift guerilla tactics and with a deep knowledge of the terrain, the Maratha armies struck with ferocity at their enemies.

First, Kanhoji Jedhe and Moropant Pingale led swift attacks on the Bijapur musketeers and artillery divisions, the speed of the onslaught taking the two Bijapur units by surprise, leading to their complete rout. More importantly, the attacks by Kahnoji and Moropant denied the remainder of the Bijapur army any artillery cover.

The Maratha cavalry, captained by Ragho Atre, led an almost simultaneous assault on the sultanate’s cavalry, with the guerilla tactics of the Marathas, helping them disorient and ultimately, decimate the Bijapur contingent.

Meanwhile, Kanhoji’s forces attacked and defeated a section of the Bijapur army, which was commanded by Afzal Khan’s trusted lieutenant Muse Khan, with Muse Khan himself fleeing the battlefield.

Sensing defeat, the Bijapur soldiers began to flee towards the village of Wai, where they had reserve forces stationed but were pursued relentlessly by the Maratha cavalry who caught up with the fleeing army and crushed them before any chance of a regroup.

The Maratha onslaught did not end there. Shivaji’s armies continued to pursue the remainder of the sultanate army which was withdrawing towards Bijapur, taking control over 23 of the Sultanate’s forts along the way and expanding the Maratha domain like never before.

Within around a month of his spectacular victory at Pratapgarh, Shivaji notched up another triumph over the Bijapur sultanate at the Battle of Kolhapur, where he attacked and defeated a 10,000-strong Bijapur army, under the leadership of the sultan’s Abyssinian general Rustam Zaman, which was sent to quell the Maratha resistance.

The twin victories turned Shivaji into a legend and sent shockwaves across the Mughal empire. Mughal emperor Aurangzeb realised that the Marathas are a threat to his supremacy and spent most of his remaining days looking to contain Shivaji and his followers.

It was an endeavour that would be the end of Aurangzeb, with the valiant struggle put up by the Marathas even after the death of Shivaji, finally leading to a decisive Maratha victory and the beginning of the era of Maratha dominance over the Indian sub-continent.

And while Shivaji was not alive to see the empire he founded establish its supremacy across India, it is fairly well acknowledged that it was his ideological thoughts and military strategies which his successors – both the Chatrapathis and Peshwas – built on and drove the Maratha kingdom to its zenith.

Across the modern Indian nation, Shivaji is remembered as one its greatest heroes and one of the foremost inspirations for the Indian nationalist movement. Lionised in verse by none other than Rabindranath Tagore in his poem ‘Shivaji’ and dubbed a ‘military genius’ by the famous war historian Bernard Montgomery. The best description of the great Maratha would still have to be the words of Swami Vivekananda who wrote:

Shivaji is one of the greatest national saviours who emancipated our society and our Hindu dharma when they were faced with the threat of total destruction. He was a peerless hero, a pious and god-fearing king and verily a manifestation of all the virtues of a born leader of men described in our ancient scriptures. He also embodied the deathless spirit of our land and stood as the light of hope for our future.

This article was originally published in February 2018.