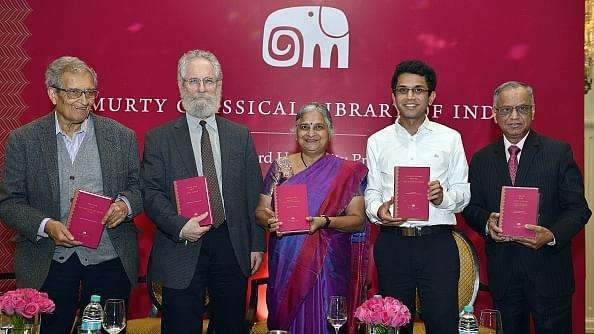 Let us be clear: the online petition signed by 132 Indian intellectuals and academicians, asking Rohan Murthy and his father, NR Narayana Murthy, to remove Sheldon Pollock as editor of the Murthy Classical Library Project at Harvard is DOA – dead on arrival. To ask a private millionaire to fire his own hire and who is paid for from private wealth is hardly the right thing to do. In any case, it won’t work.

The Murthy Classical Library project is about translating Indian literary classics into English, and Sheldon Pollock is an “American Orientalist” who would like Western scholars to tutor Indians on how to read their own classical literature, including Sanskrit literature, preferably negatively. Pollock is against the revival of Sanskrit, and would like to treat this mother of Indian languages as a dead cultural heritage, which can be dissected by Western scholars in their own orientalist way, as Rajiv Malhotra noted in his book, The Battle For Sanskrit.

However, it is surely unwise of Murthy, 33, to pretend that the petition holds no legitimacy. This is evident in how he dismissed the criticism: “It is quite rich to sit in the peanut gallery, pass comments and throw empty shells at those who are actually rolling their sleeves up and working on the ground,” The Economic Times quoted Murthy Jr as saying. It is unfortunate that Murthy should be saying this about 132 academicians and intellectuals who care about how Indian classical literature is portrayed by Hinduphobic academicians in the West.

As this writer noted while reviewing Malhotra’s book:

“American Orientalism is a product of American history, where European settlers battled previous settlers – the American Indians – before finally decimating them, both through violence and internal emasculation by pretending to be their friends. This is exactly the attitude American Orientalists bring to the study of Sanskrit, by pretending to be lovers of the language, and then trying to de-link it from its sacred roots in Hindu tradition and thought.”

The online petition asking Murthy to get rid of Pollock may be infructuous, since it has focused on an individual rather than the root problem: the inbuilt colonised mindset of Indians, which leads them to reward the Harvards and Yales with their endowments instead of strengthening classical studies in India, in Indian institutions.

Murthy, for example, donated $5.2 million to Harvard University to establish the classical library in 2010. He could have done more to develop the expertise back home. This project should have been used as an opportunity to build/rebuild India’s own pride in the past, and reinventing cultural values in a modern format, but it is instead enriching the West to denigrate us. The online petition notes Pollock’s “deep antipathy towards many ideals and values cherished and practiced in our civilisation. He echoes the views of Macaulay and Max Weber that the shastras generated in India serve no contemporary purpose except for the study of how Indians express themselves”.

However, it would be wrong to blame Murthy alone for this self-defeating vision of handing over study of the Indian past to Westerners who may be inimical to it. Whether it is Ratan Tata or Anand Mahindra or the Birlas, they prefer to invest their resources in prestigious universities abroad because of the global profile and prestige it brings them, and also because of the quality of expertise available there. But this is a chicken-or-egg question, how can Indian expertise and scholarship ever be built if all our moneyed businessmen invest to strengthen Harvard and Yale?

Ratan Tata gifted $50 million to Harvard for a new building to house their new executive education centre. Anand Mahindra gave Harvard $10 million for a humanities centre. Sanjeev K Mehra of Goldman Sachs gave away $4 million to create a South Asian Chair at Harvard. The Birlas have ties with the London Business School through their investment in the Aditya Birla India Centre.

There is no point railing against Murthy alone if India’s wealthied class get their kicks from giving money to their alma maters when they should be doing more to develop intellectual capital back home.