The Supreme Importance of Sri Rama: An Archetype For A Global Civilisation 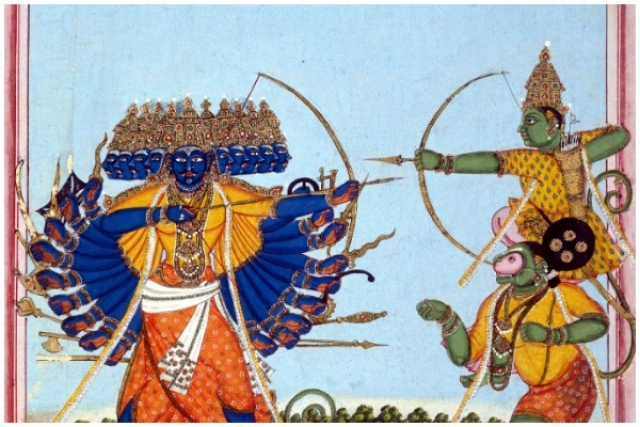 Every civilization needs a meta hero. A hero of heroes who embodies all the virtues and shines as the beacon light for what is possible with the human spirit. This requires two key elements in the meta hero — that he be very human who goes through intense suffering which is a fundamental truth of creation and therefore relatable to everyone and that he transcends that suffering through grace and courage and radiates the divine.

This archetypal meta hero is at the foundation of any civilisation to aspire and reach heights that makes living sublime. For instance, the archetype for the Western civilisation has been the story of Christ who came to live a normal human existence, took great suffering upon his own body for the sake of fellow humans and transcended it by giving his own life while forgiving his oppressors and ascended with grace.

This story has been a large part of the reason for the rise of Western civilisation. And the present degeneration in the West is also largely due to a great disconnect with this archetype in the collective consciousness of the West, caused both by the conservative orthodoxy who interpret his life and teachings of tremendous depth through a narrow prism of sectarianism and the postmodern liberals who deny all link to tradition and past due to the fog of moral relativism.

Now if we look at the present time in human history, we are a global civilisation more than ever before due largely to advances in science and technology. And a global civilisation needs a global meta hero. If we comb through all of human history and all the stories passed on through generations, we cannot find a more universally relatable story than Ramayana and a more complete meta hero than the personage of Sri Rama.

In Rama, we have a perfect archetypal human being who takes part in a profoundly allegorical journey while exploring in unparalleled depth every aspect of human relationship. And in each relationship — as a son, brother, husband, father, adversary, citizen and ruler, he faces immense challenges that result in great suffering to Rama and he overcomes them with poise and grace.

First, looking into the allegorical nature of the story of Rama and his consort Sita, it can clearly be seen symbolic of the journey of the soul. Sita represents the soul that is one with the divine that is Rama in the paradise of no conflict Ayodhya (a place with no yuddha or conflict). But the divine descends into the jungle of suffering that is creation with the soul and equipped with an intellect to discern that is Lakshman.

There the ten senses (five for perception — sight, sound, taste, smell and touch and five for action — speech, hold, movement, procreation and excretion) in the form of the ten headed Ravana who embodies passionate desire, lures the soul through the golden deer of material pleasure. And the soul falls for it due to ignoring the line of discernment drawn by the intellect.

What results is the imprisonment in the hellish existence that is Lanka. The soul deeply repents and pines for union as the divine sets forth to reclaim the soul back from the clutches of evil. And the key instrument of the divine in this sacred journey is the monkey mind that is totally surrendered and therefore of unbelievable potential to remove all obstacles, represented by Hanuman.

The hellish existence of the world that is Lanka has as its reigning quality passionate desire (rajas) but also two other brothers which are sloth (tamas) that is Kumbhakarna which aids desire reluctantly and goodness (sattva) that is Vibhishana which gives up desire to become another instrument of the divine.

Once Hanuman sets fire to Lanka, i.e. the totally surrendered mind burns desire, the final battle is only a formality and hence the supremacy of Sundar Kanda. And the coronation of Rama with Sita back in Ayodhya is the ascent of the soul to the throne of the divine.

Next, exploring the archetypal aspect, what we see in addition to the deep metaphorical truths embedded in a layered manner in the story is the perfect embodiment of the healthy masculine integrated with a secure feminine in the character of Rama and the very opposite in Ravana.

The healthy masculine is one who faces adversity with courage, always ready to help others, shoulders responsibility with seriousness and tries to avoid confrontations, but never shies away when necessary. Rama is the personification of all of that.

There is also a toxic masculine which is the unconscious dark shadow of masculine — aggressive, dominating and imposing one’s will on others. Ravana is the personification of all that. A healthy masculine has integrated and transmuted the shadow of anger and aggression. Thus Rama, when necessary, can summon great anger that can terrify the evil forces as in the final battle. But he has the anger, the anger doesn’t have him. Which is the case with the toxic masculine of Ravana consumed uncontrollably by anger and aggression.

This toxic version is the image of the masculine that has become so prevalent in society today due to men falling into the unconscious dark shadow and not realising what healthy masculine is. This is compounded by radical feminism that stereotypes all masculine as toxic thus making men feel guilty to even explore what healthy masculine is. Ram embodies the healthy masculine completely and without a trace of the toxic kind. And because of that, he is totally secure to also expose the feminine side of feeling vulnerable or in tears when Sita is taken away. A toxic masculine on the other hand suppresses any natural expression of the feminine which only increases the aggressive toxicity.

In a world today characterised by aggressive and competitive instincts that is not only prevalent among males but increasingly among females too as they try to play the same zero sum game of the corporate or political world, it can be of tremendous value if we really look into the character of Rama to discern what healthy masculine is and as a natural consequence what healthy feminine is.

Finally it is important to note that the great symbolism of the story at all these levels need not and does not take away from the historicity of it as evidenced by the recent findings of the man-made bridge lying underwater between India and Sri Lanka. There are varying claims about the time period, some of the places mentioned etc., and much research may be necessary to get to the bottom of it. But that is not important in the central sense as it is faith that holds this ancient story sacred for millennia and Rama has continued to remain as a beacon light for thousands of generations.

This story has been at the foundational civilisational core of not only India, but has also been exported to many far away countries who still hold the story as their own, whether it be Indonesia, Cambodia or Thailand. But as it inevitably seems to happen, here again the core tenets and the depth of what Rama represents has got eroded over time due to the same opposing forces of conservative orthodoxy and liberal revisionism. This resulted in tremendously weakening the civilisation, leaving it vulnerable and defenseless to the onslaught of invading forces from all directions. But that’s all become history and we have come a full circle.

And now with the rise of the new global civilisation in this new millennium, it must be rightly seen as not the heritage of one nation or sect but a global heritage, for it is the story of the supreme human. As this glorious heritage of Ram is revitalised, it is necessary that it is also welcoming and embracing people of all backgrounds. This is all the more vital today due to the growing global crisis we are in the middle of. This crisis has been created by the present human consciousness which has descended into the toxicity of authority, pleasure-seeking, greed and aggression that is Ravana.

And what we need individually and collectively is a shift toward inner freedom, meaningful living, contentment and collaboration that is Rama.